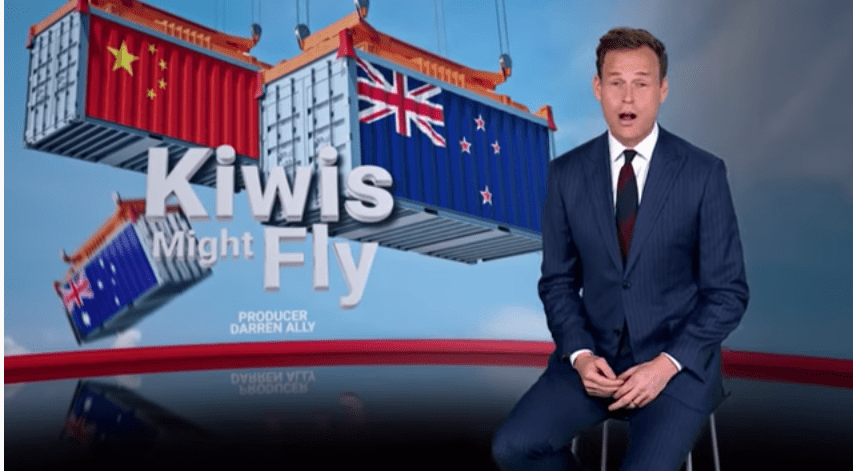 There is much to unpack here. Essentially it shows that New Zealand has sold its soul to an even worse devil than the United States – for financial gain.

This goes back further even than New Zealand being the first to sign a Free Trade Agreement in 2008 and joining China’s Belt and Road initiative.

I recall, back in the 1990’s how Wellington gave in to the Chinese when former leader Jiang Zemin visited and allowed his goons to manhandle a sitting member of Parliament.

I don’t think we know the extent to which this country is over-the-barrel with bigger interests.

The question arises just how we got to today where the democratic rights of citizens are being run over roughshod in the interests of globalist interests.

A conversation yesterday got me wondering what hold this Invisible Hand has over this country and it could be to do with our mushrooming debt – a promise on the one hand, a threat on the other.

NZ Government puts trade and diplomacy ahead of human rights

The Government is buckling to Chinese demands and putting trade and diplomacy ahead of human rights and freedom of speech, Green Party Co-Leader Rod Donald said today.

“Official moves to place buses in front of New Zealand protestors including children so that Chinese President Jiang Zemin can’t see anything that reminds him of the terrible outcomes of China’s invasion of Tibet is deplorable, ” Mr Donald said.

“In effect the Shipley regime has sacrificed New Zealanders’ freedom of speech and cast aside our democratic rights without a second thought in order to placate a tyrant.”

Mr Donald says his decision to boycott last night’s state dinner held in honour of President Jiang Zemin has been vindicated. “I declined an invitation to the dinner because I was not prepared to honour the president of a country which has such an appalling human rights record, particularly in relation to the people of Tibet,” he said. “Jiang Zemin heads a tyrannical regime which is prepared to go to any lengths to maintain its hold on power.

“This was graphically illustrated last night when Chinese authorities effectively took over the New Zealand police force by demanding that peaceful protestors be removed from outside the venue of the state banquet.

“It was not surprising that the president of a country which is prepared to slaughter defenceless protestors in Tiananmen Square wanted vocal advocates for a free Tibet to be removed ‘out of sight, out of mind’ but I am incensed that the New Zealand government was so willing to oblige. “The Prime Minister should have told the Chinese President that we live in a democracy where the right to lawful protest is cherished. Instead, she willingly used the police as political pawns. The role of the police is to uphold law and keep the peace. It is not there to act as a private army for the government of the day.

“What happened last night is a dangerous turn of events. I urge the Prime Minister and the police to apologise to the Free Tibet Movement. If such an apology isn’t made, the public can only conclude that state suppression of peaceful protest is now the order of the day. “I would also invite those politicians who attended the state dinner to reflect on their participation in last night’s events. Unwittingly perhaps, they have endorsed the Government’s harassment of peaceful demonstrators just so the man they were honouring could avoid calls for justice.

“For President Jiang Zemin to stand up after the dinner and say ‘It wasn’t my fault’ for his late arrival denies not only his cowardly behaviour last night, but also the cowardly behaviour of the Chinese government towards the people of Tibet.”