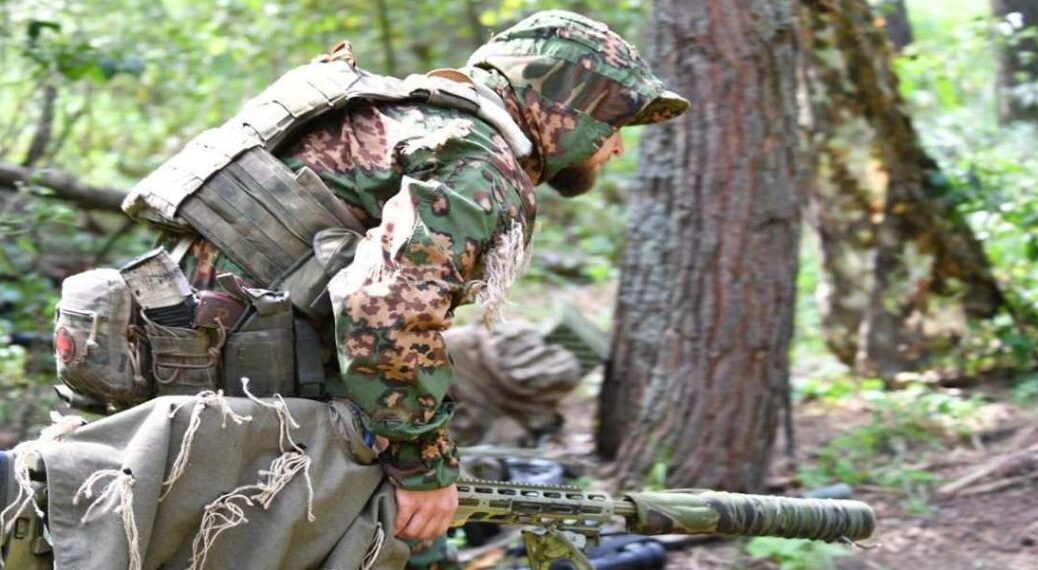 There are videos attached to these videos. Go to the original to view them

In a high-risk operation for the entire planet, the Ukrainians proceeded, as they attempted with numerous forces a double attempt to land and seize the Zaporizhzhya nuclear power plant.

Around 06:00 Moscow time, a group of about 60 Ukrainian saboteurs after crossing the Dnieper in seven boats, landed on the coast of Kakhovka three kilometers northeast of the Zaporizhia nuclear power plant.

The 60 Ukrainians split into two groups and tried to take over Energodar and the nuclear plant.

The result was that fierce clashes broke out very close to the nuclear plant. The Russian Air Force, fighters and helicopters, along with artillery began to bomb Ukrainian forces.

At the same time, a second landing attempt followed with two barges which were sunk by the Russian Air Force.

According to the Russians, all Ukrainians were killed. The dead are over 100.

See below on the maps how close a nuclear accident came.

Landing of Ukrainian forces in Energodar

According to the Russian Ministry of Defense, Ukrainian forces carried out a landing in the Energodar region.

“Today, at approximately 6:00 Moscow time, Ukrainian troops in two sabotage groups of up to 60 people in seven boats made a landing on the coast of Kakhovka, 3 km northeast of the Zaporozhye nuclear power plant and tried to seize the power plant.

Measures were taken to destroy the enemy, including the use of aviation.

In addition, since 8.00 Moscow time, the Armed Forces of Ukraine have been shelling the meeting point of the IAEA mission in the area of ​​Vasilyevka settlement and Zaporozhye NPP. Four shells exploded within 400 meters of the first power unit.

The provocation of the Kiev regime is aimed at disrupting the arrival of the IAEA task force at the Zaporizhzhya nuclear power plant, ” the Ministry of Defense stressed.

The Russian Ministry of Defense later updated this information. According to the new report:

“On the morning of September 1, the Kiev regime attempted a major provocation to disrupt the arrival of a working group of IAEA experts at the Zaporizhzhya nuclear power plant.

At 06:20 on the coast of Kakhovka, three kilometers north-east of the Zaporizhzhya nuclear power plant, two sabotage groups of the Armed Forces of Ukraine with a total number of up to 60 people moving in seven high-speed boats made a landing.

The sabotage groups were discovered and blocked at the landing zone by the National Guard units guarding the territory of the Zaporozhye nuclear power plant.

To quell the attempted infiltration of the nuclear power plant and destroy the Ukrainian saboteurs, a unit of the Russian Armed Forces arrived to reinforce the Russian Guard soldiers, and Air Force helicopters were also involved.

The destruction of the Ukrainian sabotage group is currently being completed

A second attempt was made!

At about seven in the morning, units of the Russian armed forces prevented another attempt to land Ukrainian troops to seize the nuclear power plant.

A few kilometers from the Zaporizhzhya nuclear power station, there was an attempt to disembark the Armed Forces of Ukraine with two barges leaving from Nikopolis.

As a result of heavy fire from the Russian armed forces, the two barges with the landing forces of the Armed Forces of Ukraine were sunk.

Since 8 am, the Kiev regime has blocked the passage of the IAEA mission of experts to the controlled area at the Zaporizhzhya nuclear power plant. Ukrainian artillery is shelling the territory of the nuclear power plant, the meeting place of the IAEA mission with Russian experts in the area of ​​Vasilievka settlement, Zaporizhia, as well as the route of their movement to Energodar.

Four shells exploded within 400 meters of the first power unit of the Zaporozhye nuclear power plant.

Despite the efforts of the Kiev regime to interrupt the arrival of a group of IAEA experts at the Zaporizhia nuclear power plant, the Russian side confirms its readiness to receive them in complete safety for further work.

The situation in the area of ​​the nuclear power plant is difficult, but remains under full control.

Yesterday, August 31, the armed forces of Ukraine attacked the territory of the nuclear power plant with three “kamikaze drones”. All unmanned aerial vehicles were neutralized by Russian electronic warfare systems on their approach to the station. Two of them fell on the roof of the training center. There are no casualties or damage.

According to the Russians, on the morning of September 1, Energodar was again heavily shelled by the Armed Forces of Ukraine – three civilians were killed, one was injured, and the buildings of two kindergartens caught fire.

The landing and shelling of the Energodar by Ukrainian troops is aimed at preventing the IAEA from reaching the Zaporozhye nuclear power plant, said Volodymyr Rogov, a spokesman for the military-civil administration of the Zaporizhia region.

N. Peskov: We are afraid of provocation by Ukraine

Kremlin spokesman Dmitry Peskov stated that Russia fears provocative actions by Ukraine against the Zaporizhzhya nuclear plant ahead of the visit of inspectors from the International Atomic Energy Agency.

“We are concerned about the possibility of a provocation from the Ukrainian side, given that the barbaric and provocative bombardment has not stopped,” Peskov said, adding that Russia is ready to cooperate with the International Organization and wants its mission to reach the nuclear plant. .

Lavrov: We are doing everything we can for the safety of the factory

Russian Foreign Minister S. Lavrov also intervened in the matter, who asserted that Russia is doing everything possible to ensure that the nuclear plant will operate safely and that the visit of IAEA inspectors will take place successfully.

“We are doing everything we can to ensure the smooth operation of the factory.

But also to ensure that the inspectors implement their plan,” Lavrov argued.

Ukraine: The Russians are bombing indiscriminately

The Russian claims were strongly rejected by the Ukrainians, who accused Russian troops of taking the opportunity to bomb Energodar, along the route the IAEA mission will take to reach the nuclear plant.

“The Russians are launching artillery strikes against the route the IAEA mission will take to get to the Zaporizhia nuclear power plant, which is in Russian hands,” Energodar’s exiled mayor Dmytro Orlov said in a Telegram message. .

As he said, the mission cannot “continue its way” to the station “for safety reasons”.
“We demand that Russia stop the provocations and allow the IAEA access to this Ukrainian nuclear facility ,” Orlov stressed.

But Mykhailo Podolyak, adviser to Ukrainian President Volodymyr Zelensky, argued that the actions of the Russians also show the “burden” of Russian security guarantees to any intermediary.

To blame Ukraine. Houses were destroyed.

This is a proof of the real “interest” of the Russian Federation in the inspectors.
And this is another proof of the “burden” of Russian “guarantees” to any intermediaries,” said Podolyak.

Meanwhile, Ukrainian operator Energoatom announced that one of the nuclear plant’s two reactors had shut down due to the bombing.

However, he announced that “power plant 6 is still operating” and providing the electricity the nuclear plant needs.

See on the maps the route of the Ukrainian forces and their bombardment point. 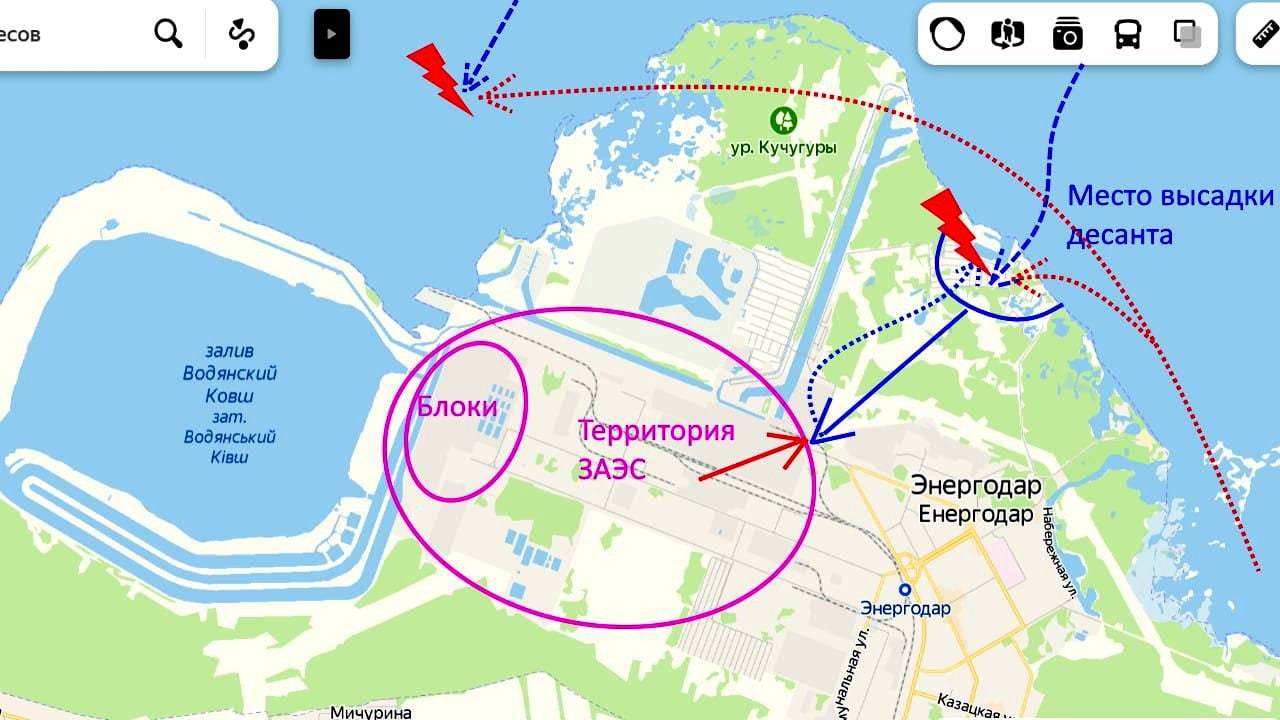 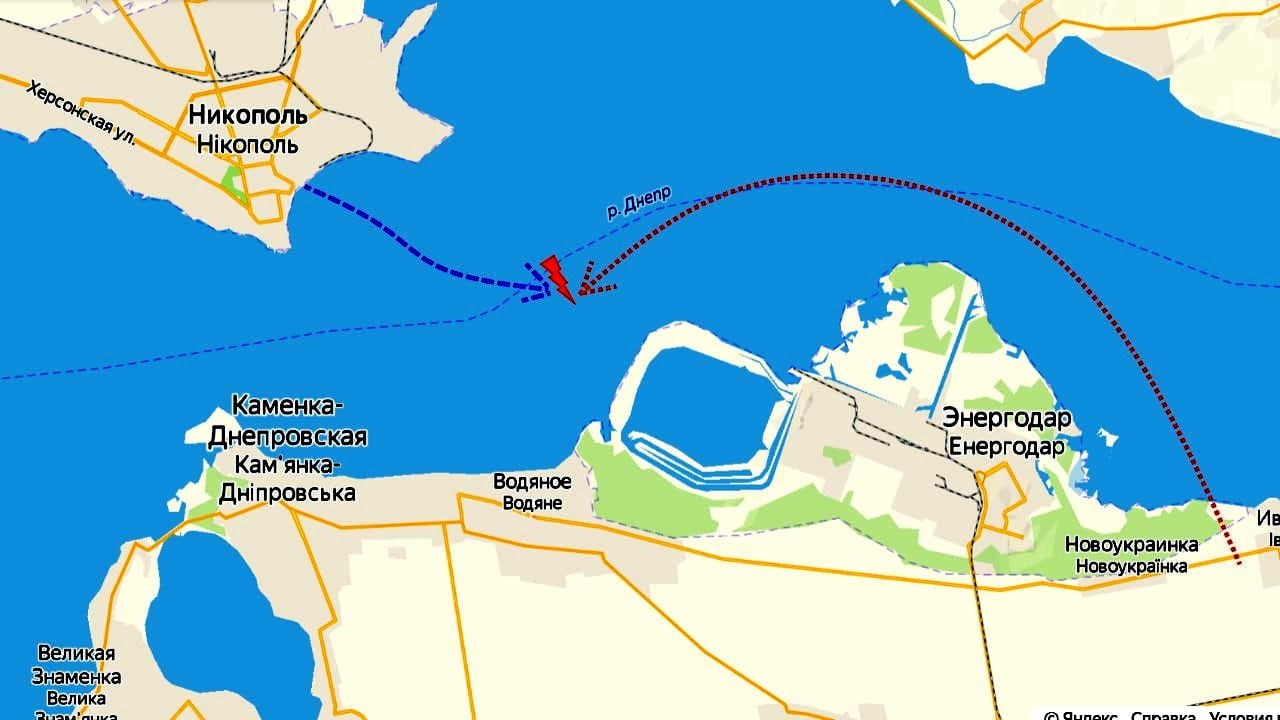 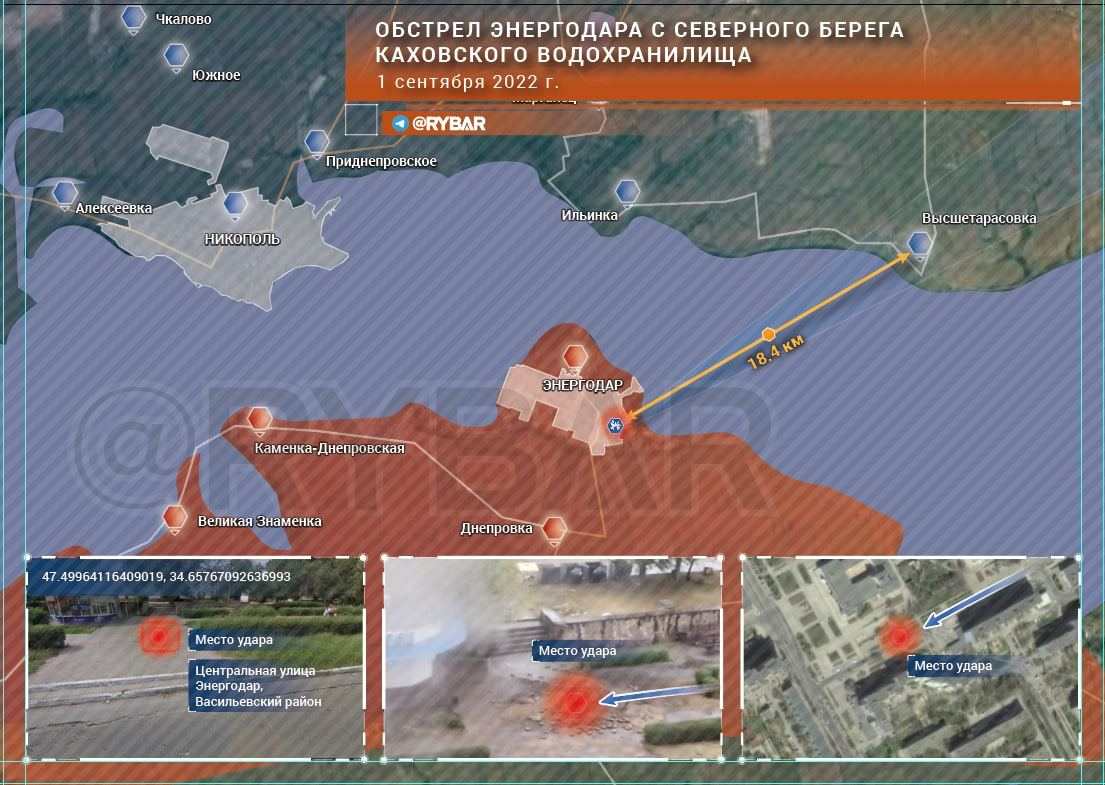 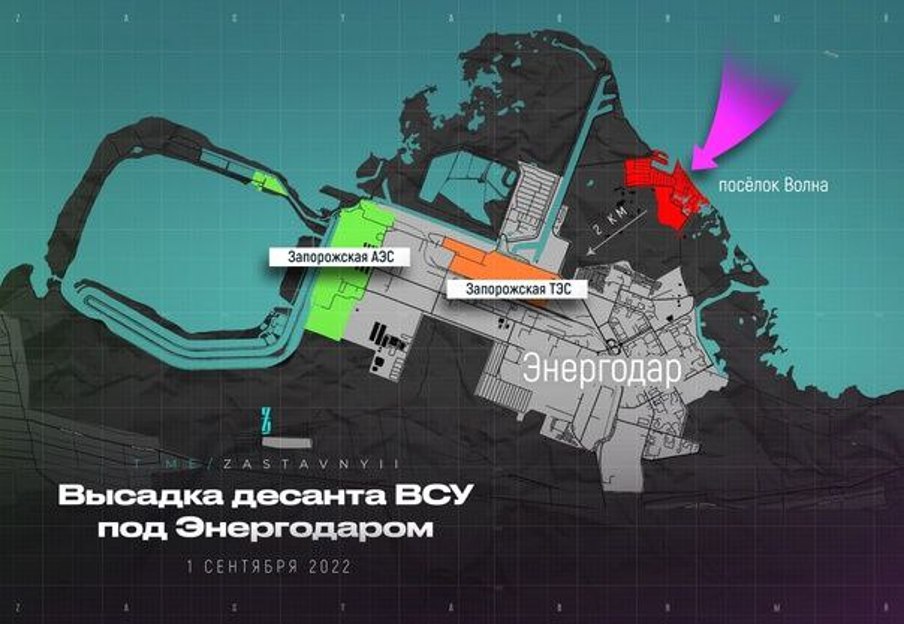 Shocking details were published a while ago by Russian media about today’s amphibious act of Ukraine in the area of ​​the Energodar nuclear power plant in Zaporizhzhya. At the same time, new information was given about the situation in Kherson and the losses of the Ukrainians.

More than three hundred elite soldiers of the Ukrainian special forces were killed during an attempt to seize the Energodar nuclear power plant.

On the morning of September 1, the Armed Forces of Ukraine attempted to land troops near Energodar and seize the Zaporozhye nuclear power plant, while the IAEA mission reached the energy facility, which is under the control of the Armed Forces of Russia.

According to updated data, Kyiv lost more than three hundred elite soldiers of the Ukrainian special forces who participated in the operation.

On the coast of Kakhovka and in the coastal zone of Energodar, two damaged barges had about 140 soldiers on each, and about 50 more soldiers were being prepared for transport from Nikopol.

The total number of military personnel involved from Ukraine’s SOF and GUR units was approximately 320-330, of which 230 had recently completed their training in the UK and returned to Ukraine.

This is reported by Russian media emphasizing that the “number of British officers needs additional verification”.

The Russians are clearly implying that the British planned the attack.

Watch video with the chart of the Ukrainian attack. In the second video, the burning barge in the Dnieper that carried the Ukrainian forces

On the Kherson front, Ukrainian casualties continue to mount.

The 128th Mountain Assault Brigade of the Armed Forces of Ukraine from Transcarpathia suffered heavy casualties during the failed counterattack in Kherson.

The video shows the provision of medical aid to the injured during a “suicide attack”. The forces of the 128th brigade came under heavy fire from the Russian artillery.

The Russian army repelled the attacks of the Armed Forces of Ukraine on the Kherson front.

► “According to reports from the Kherson front, the attack of Ukrainian forces on Snigirevka was repulsed. There are no further details yet.

“Obviously (and expectedly), the offensive of the Armed Forces of Ukraine on the Kherson front did not end after the failure of the first attacks, the enemy is trying to succeed at least in one of the directions ,” said I. Strelkov and added:

“I have little information about the events at the front today.

“The enemy repeated an attack attempt at Kirovo-Aleksandrovka and Ternovye Pody. Unsuccessfully. Our troop positions are located in the southern suburbs of Ternovy Podyt. The northern part of the village is in the “grey zone”.

I can only say clearly that during today’s day the enemy again persistently tried to capture Ternovye Pody, but to no avail

In the Ingulets bridgehead there are no significant changes .’

CNN: The US has called on Kyiv to limit its counterattack

The US has urged Kyiv to limit the operation both in terms of targets and geography to avoid over-extension and stagnation on multiple fronts.

This is reported by CNN citing American and Western officials, as well as Ukrainian sources.

The US has engaged in discussions with Kyiv, the sources said, to help Ukrainian commanders understand what level of force they need to muster to succeed in various scenarios.

The Ukrainian military initially considered a broader counteroffensive, but in recent weeks has narrowed the mission to an attack in the south, in the Kherson region, U.S. and Ukrainian officials said.

Officials say they believe there will be a tie between the Ukrainian and Russian armies.

How successful the Ukrainian counteroffensive will be remains an open question, sources familiar with the latest information tell CNN.

CNN: The US gave Ukraine weapons specifically for a counterattack in the south

“The latest arms shipments from the US are intended to counterattack Ukrainian forces in the south.” This was stated by a spokesman of the White House according to CNN

The White House has been helping the Ukrainian military prepare for the current counteroffensive in recent months by fulfilling specific requests for weapons.

Ukraine has asked the US for weapons specifically designed for its planned counter-offensive in the south in the months leading up to this week’s launch .

The US has fulfilled many of those requests, including more ammunition, artillery and ATGMs, in the past two months, the official added.

The composition of the aid packages was publicly known, but neither the US nor the Ukrainian side said they were designed in part to fuel a counterattack, the official explained.