Update (1455ET): Sri Lankan President Gotabaya Rajapaksa announced he would step down late Saturday night after thousands of protesters rushed his official residence and offices earlier in the day.

Rajapaksa has taken refuge in an undisclosed location, some have pointed out, possibly on a naval ship.

“To ensure the continuation of the Government including the safety of all citizens I accept the best recommendation of the Party Leaders today, to make way for an All-Party Government … To facilitate this I will resign as Prime Minister.”

To ensure the continuation of the Government including the safety of all citizens I accept the best recommendation of the Party Leaders today, to make way for an All-Party Government.

To facilitate this I will resign as Prime Minister.

The Sri Lankan constitution says if Rajapaksa and Wickremesinghe both resign, the parliament speaker will assume power for one month.

Social unrest comes as the country has suffered runaway inflation and shortages of food and fuel after depleting foreign exchange reserves.

“The president was escorted to safety,” a senior defense source told AFP. “He is still the president, he is being protected by a military unit.”

Alleged footage of the president fleeing on a naval ship.

Footage emerges said to be of President Rajapakse fleeing Sri Lanka aboard a Navy Vessel. pic.twitter.com/yvaYv5uGvB

Footage uploaded to social media platforms from the president’s residence shows thousands of protesters surrounding the palace and then charging inside.

Protesters enjoying Sri Lanka’s absconding President’s swimming pool! No dictator should remain in illusion that the power is for ever, and when the end comes, it is always violent and nasty. pic.twitter.com/T3ePbkA0gM

🚨Breaking: Sri Lanka President Gotabaya Rajapaksa flees after he declared the nation as total bankrupt. The moment after that the citizens surrounded the presidential palace and waived black flag along with Sri Lankan🇱🇰. There are no news yet on the whereabouts of President. pic.twitter.com/PGyev8lFxs

Prime Minister Ranil Wickremesinghe held emergency talks with party leaders before the parliament speaker during the unrest to decide what was next in resolving the worsening socio-economic crisis in the country of 22 million people.

Lawmakers asked Rajapaksa to relinquish his power to allow a new leader with a parliament majority to regain control and find a swift resolution to high inflation and shortages that have angered people for months.

The debt-laden economy of the tiny South Asian nation has “completely collapsed” as it lacks foreign exchange reserves to import essential items such as food and fuel. Shortages have materialized as the government began rationing goods last month.

Even though the government has held talks with the IMF, India, China, and Japan for new credit lines and even spoke with Russia about purchasing heavily discounted crude, the country entered a terminal phase where social unrest is spiraling out of control.

Visual Capitalist’s Avery Koop details several reasons for this crisis and the economic turmoil has sparked unrest over the last several months. This visual breaks down some of the elements that led to Sri Lanka’s current situation.

The Sri Lankan crisis carries the potential for an Arab Spring-style eruption across other countries that could quickly morph into an “Everywhere Spring” as people worldwide are angered by high inflation and shortage of food and fuel. This eruption in unrest could eclipse the revolution seen in 2011 that spread across the Arabic-speaking world due to high food prices.

Everyone’s favorite permabear, SocGen’s Albert Edwards, first warned about the consequences of central banks injecting record amounts of money into the global economy in late 2020 and how it could spark soaring food prices, similar to 2011, where social unrest and revolutions were seen in many Arab countries.

Edwards’ prediction appears to be playing out. It could be much worse than a decade ago as much of the world experiences economic hardships and what some believe could be the emergence of stagflation.

Could the fall of Sri Lanka signal that weak, heavily indebted countries worldwide are about to fall like dominos?

This is what some are saying 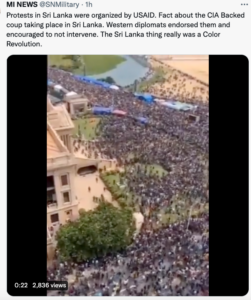 Sri Lanka has accepted a USAID project to promote “productive democratic governance” and is seeking fuel on credit from Middle East.

Down to the dregs in forex holdings, critically short of fuel and cooking gas, and virtually abandoned by China, Sri Lanka is giving up its ingrained reservations about the United States and the Middle Eastern Islamic countries, and is seeking their help to tide over the multiple crises Colombo is facing now.

At the end of June, the Sri Lankan cabinet approved a proposal by Prime Minister Ranil Wickremesinghe for implementing a program of the United States Agency for International Development (USAID) named “The Program for a Democratic, Prosperous Sri Lanka with the Ability to Survive Amidst Disasters.” This program, to be executed with a grant of $57 million, will concentrate on “productive democratic governance, growth based on a secure market, and strengthening the resources required to sustain pressure and stress.” The program will last until 2026.