What were the cops hoping to achieve turning up early in the morning with mass media in toe to catch the action.

The cops seem to be trying to provoke to incite a violent reaction from the protesters in self defence and force them out.

Much more to come. 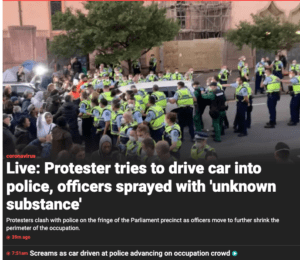 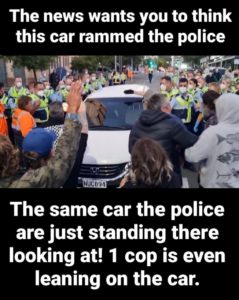 Clashes between police and protesters erupted this morning, as claims are made that trouble-makers in the crowd are paid police ‘agitators’.

Earlier, a white car was seen to drive dangerously close to the police line, resulting in the driver being forcibly removed from the vehicle.

Protesters have identified a number of individuals on social media who they claim are working for police to deliberately start and fuel violence.

Documented footage of the morning of 22 February 2022, when police were given the trespass notice by the tangata whenua and descended on the people of the peaceful protest. Also documents some agitators that weren’t part of the protest and a possible setup.

They bent evil cops are trying to provoke to incite a violent reaction from the good people in self defense and force them out.

This is the white car approaching police and protesters this morning