“Because of the gas bottlenecks, entire industries are in danger of permanently collapsing: aluminum, glass, the chemical industry,” said Yasmin Fahimi, the head of the German Federation of Trade Unions (DGB), in an interview with the newspaper Bild am Sonntag. “Such a collapse would have massive consequences for the entire economy and jobs in Germany.” 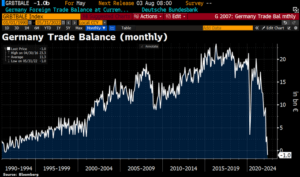