People are caught (justifiably) in moral outrage against what is coming their way on the covid/vaccination front, but are oblvious, by-and-large, to the freight train bearing down on them. 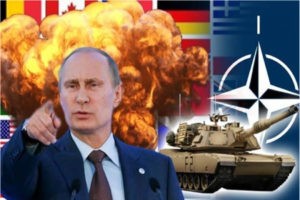 The situation in eastern Europe got very much worse today in the ongoing troubles between Russia and Ukraine/US/UK/NATO.

With Russia massing utterly gigantic numbers of troops, tanks, artillery, and armored personnel carriers both in Crimea and on Ukraine’s eastern Border states of Luhansk and Donetsk, an “Emergency Meeting” was called of the Trilateral Contact Group on the Conflict in Donbas. (The “Donbas” is the two-state region consisting of Luhansk and Donetsk, which want to breakaway from Ukraine and join Russia).

The purpose of the emergency meeting was to ask Russia to renew the cease-fire agreement, which Expired on March 31.  Russia had previously refused to renew it when Ukraine began massing troops on the borders of the Donbas.

At the time, it appeared to Russia, and to most others watching developments, that Ukraine was intent on a military solution to the breakaway states, and intends to take them back by force.

Moreover, the President of Ukraine had also signed a Decree declaring Crimea as being “under occupation” and approving a military plan to forcibly take it back from Russia.  In fact, on other documents, Ukraine declared that the conflict with the two breakaway states was “an international conflict” and the combatants were “Ukraine and Russia.”

When those documents became public, Russia recoiled in horror, saying they amounted to a Declaration of War upon Russia by Ukraine!

Seeing these developments, Russia declined to renew the cease fire agreement, and then sped-up the movement of additional Russian Army units to Crimea and to Russia’s border with Ukraine.

The Trilateral Contact Group is made up of Ukraine, Russia, and the Organization for Security and Co-operation in Europe (OSCE), and in September 2014, representatives from all three parties signed the Minsk Protocol, an agreement to end the Donbass war.

Now, with worries that fighting may flare up again, there have been proposals to head back to the Belarusian capital for further talks.

According to Kiev’s deputy prime minister, Alexey Reznikov, the Ukrainian side will refuse to attend. “We said that we will not take part in the meetings of the Trilateral Contact Group if the Covid-19 quarantine suddenly ends and it is proposed to continue consultations in Minsk,” he explained on Monday. “To hold talks in real life, we will have to look for another country, another city.”

Ukraine claims this is because Belarus is “under the influence” of the Kremlin, and Kiev has lost confidence in its northern neighbor, he said. As things stand, due to Covid-19, discussions between the three parties take place via videoconference. Before the pandemic, they met face-to-face in the Belarusian capital.

Reznikov’s assertion that Kiev will no longer go to Minsk follows attempts by other Ukrainian officials to move discussions to another country. Last summer, Ukraine’s former president Leonid Kravchuk, who now serves on the Donbass negotiation team, revealed that he tried to move talks from Minsk to Sweden.

In response, the Russian Foreign Ministry then noted that “the key to success in settling the Ukrainian conflict is not in the change of negotiating venues or formats,” but simply the political will of all parties.

This afternoon, the Pentagon made known the following:

Ready for the answer they were given?

“Moscow does not intend to give the US additional explanations on the situation in Ukraine, the US should be happy with what were given earlier” – Ryabkov

This situation is deteriorating so fast, there may now be no way to stop it.

One would think that Ukraine would be desperate to negotiate rather than get their country blown to shit by the Russian Army. Instead, Ukraine plays childish games. “We’ll meet you here, but not over there.”

Their games are going to be brought to a very horrific end when several thousand Russian tanks roll across their border and show them what’s what.

Ukraine is about to get stomped into the equivalent of radioactive dog shit.

Them relying on NATO to fight for them is stupidity on stilts.  WHERE do they think NATO will be fighting for them?   It will be in Ukraine, and as most war planners have told us for years, Tactical nukes would have to be used to TRY to stop the Russian Army because it is so powerful.  Guess where those Tactical nukes will be blowing up?   Yes, Ukraine!

But look at the bright side: much of Ukraine will be smooth as glass and maybe even glow in the dark for decades after the war!

Very many people in NATO and in the USA are of the thinking that Russia would never use nukes in any conflict because of “Mutual Assured Destruction (MAD).”

To those who are basing all your hopes on “Oh they wouldn’t dare because it’s mutually assured destruction” I say: That only works if said destruction is ACTUALLY MUTUAL.

I’ve got news for those people: It’s not; and it won’t be… Hell it CAN’T ACTUALLY BE!!

Look at a map sometime, and realize that Russia occupies 11 TIME ZONES! The country is huge. There aren’t enough nukes on the whole planet to actually blanket the land mass of Russia.

In order for MAD to work as a deterrent you have to be able to mutually destroy each other.

Russia has spent two decades making sure it can survive even a pretty serious nuclear exchange and rebuild after.

Russia has stored food and water in those shelters, stored vehicles, stored machine tools, etc.   The USA has . . . . NONE . . . . of those things.

Russia’s electric power grid is hardened.  Ours is not (too expensive.)

Russia’s telecom grid is not just hardened but fully capable of disconnecting from the rest of the world and operating standalone as well as extremely hard to compromise.  Ours is not.

These facts kind of shit-all-over the MUTUAL in mutual assured destruction, right?

Too many people here in the USA and in Europe are operating under grievously unsound assumptions like “Mutual Assured Destruction” if this shit with Ukraine blows up into something major.

Operating based on the wrong information is quite literally worse than operating completely in the dark.

Russia’s civil defense preparations are well documented. Where is America’s?

Our civil defense program consists of duck and cover almost exclusively. We’ve hardened communications on military bases . . . but that’s pretty much it.

Russia has definitely tipped the scales in their favor as far as nuclear war goes.  Put simply, most of them will survive while most of us will die.

Here’s how it will likely go:

Russia has stated several times (Foreign Minister Lavrov) that Russia will respond by destroying the launch-sites of an attack. That is to be interpreted as: If Russia is attacked from an airfield in Poland, that airfield will be destroyed. That is classical proportional response policy.

This is exactly, precisely, how a war may escalate, by USA, UK, and Canada, using other NATO-countries to launch attacks. Those countries will then be defined as parties in the war, and will be attacked by Russia.

And the USA is already sticking its military nose into this Ukraine affair.  We’ve already got Intelligence aircraft (Drones) and Military Intelligence-0gathering aircraft flying off the coast of Crimea.  We’ve been sending C-17’s of weapons into Kiev and into western Ukraine.  Here, look at the radar from the area around 5:00 this morning: 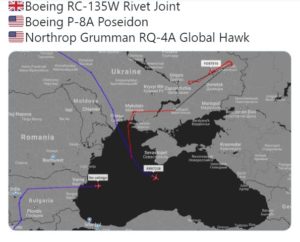 We in the US and Europe are already neck-deep in these troubles; mostly because WE are the ones CAUSING them!

Well, what happens when Russia realizes they have to cut the supply line in order to defend themselves?  You know where those supplies are all coming from, right?   Yes, here in the USA.   From airports and from sea ports.

We’ve sent several shiploads of supplies already, and weapons systems like tanks from the port of Savannah, GA.

So what happens when it’s time for Russia to cut off the supply lines?

Well, Russia does not have as big a Navy as we do, so I don’t think we’ll be seeing naval barrages fired against our ports.  Their Air Force is good, but the distances are such that it is unlikely (to me) that air strikes would happen.   What does that leave the Russians?

The kind that can go from Russia to America in about 30 minutes.

For those unaware, Russian missiles usually carry between 6 and ten warheads to hit multiple targets.

Well, the US East Coast would be the chief supply line for Europe.

That means the port cities of:

(MILITARY TARGET) The US Navy Submarine Base at Groton, CT

The Port of New York and New Jersey

The US Navy Submarine Base at Kings Bay, GA

That’s 13 separate targets, but possibly 15 if you count the military targets mentioned above.   Russia could wipe almost ALL of them out with . . . .  ONE . . . .  Missile and it’s ten warheads.

How many citizens who live and work in those cities (tens-of-millions) have any idea AT ALL their city may end up being hit because it is a SUPPLY POINT for the war in Ukraine?

Now that you have the actual facts, let me ask: How do you feel about the west playing brinkmanship games with a country that just flat doesn’t see nuclear counterforce strikes as a threat at all, and would only be MODERATELY INCONVENIENCED by full out MASSIVELY DISPROPORTIONATE nuclear counter value retaliation strikes?? (that’s strikes on population centers, etc.)

Our leaders are playing a very stupid game with our lives right now against people who aren’t scared of what we can do back to them.

Do you want to know  WHY our leaders are playing these games?  Here are more inconvenient facts:

Our leaders here in the west (Both the USA and Europe) are, – almost ALL of them — a bunch of greedy, stumble fuck, 4th-generation-aristocracy-rejects, with delusions of grandeur, insatiable greed, and lust for power.

If we had a single competent leader amongst the lot of them, this situation would have never got to this point.

For the record, I have personally estimated that this war in Ukraine will go hot – kinetic – “On or before May 2.”

I stand-by that estimate, but things are already taking place which may speed it up.

For those of you who think I’m somehow blowing this out of proportion, or who think “There’s no way this will go nuclear” take a watch of the two minutes of Russian public television broadcast there today.  Politicians from the Russian Duma (Congress) OPENLY TALKING ABOUT USING NUCLEAR WEAPONS OVER THE UKRAINE SITUATION.

Here’s the juicy part: While all of Russia and its citizens know the facts and know what’s happening, average Americans and average Europeans don’t even have a fucking clue.  Barely a peep out of the mass-media in the US or Europe.

So while Russians are being told the truth and are getting ready to save their own lives, we in the West?   Crickets.  Silence.  Blissfully unaware that the demented fool whose political party STOLE the White House through Election Fraud, is screwing things up so badly, we’re heading into nuclear war.

And the mass-media that helped the theft of the election, remains intentionally quiet about the EFFECT of what they did, as the destruction from what they helped do, moves closer and closer to the rest of us.  Putting a dementia-addled weakling in the White House is what got us here.

You’d better get prepared.   Emergency food, water, medicines, fuel to heat the house and for vehicles, Communications gear (CB or HAM radio or GMRS), Fire Extinguisher(s), and an EVAC PLAN if you live in or near any of the target cities listed above.

I will talk much more about this on the radio show tonight.  Tune-in as follows: