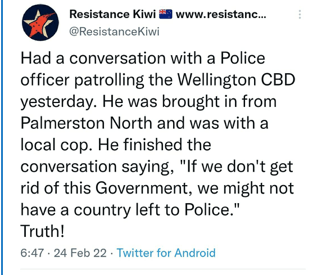 One part of the media, and one part only, doing what the media should do – ask questions 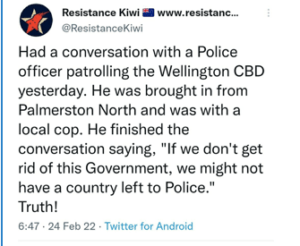 This is the latest ploy on behalf of government and media.

The occupation camp at Parliament has been deemed a “location of interest” by health officials due to the spread of Covid-19, potentially affecting hundreds who visited the site over the weekend.

The occupation site, which spans Parliament grounds and many adjacent streets, was designated a Covid-19 concern on Thursday morning by health officials. People at the occupation between Saturday 11.55am and 11pm and Sunday 11am and 11.59pm, are at risk of exposure to Covid-19, and considered close contacts.

“Self-isolate for 7 days, test on day 5 after you were exposed at this location of interest. Monitor symptoms for 10 days. Test again if you feel unwell,” said the Ministry of Health advice, issued on Thursday morning.

Under the Government’s Omicron phase 2 setting, in place as of Thursday midday, people deemed close contacts are expected to self-isolate for seven days and take a Covid-19 test at day five of this isolation period.

However, Covid-19 Response Minister Chris Hipkins on Thursday said the Government would move the country into phase 3 of the Omicron response as of midnight, as there had been around 5000 Covid-19 cases recorded – a climb from the nearly 3300 recorded on Wednesday.

Under phase 3, the definition of a close contact would change to being a “household-like” contact, meaning those attending the occupation grounds may not be required to self-isolate.

It’s understood that police officers and other emergency service staff who have been working at the occupation grounds have not been deemed close contacts, as they have been wearing personal protective equipment.

The Ministry of Health on Wednesday afternoon confirmed there have been at least two Covid-19 cases associated with the protest, and police have previously said officers who were working at the Parliament occupation have tested positive of the virus. Stuff understands five officers at the protest site had tested positive.

The Ministry of Health declined to confirm whether further Covid-19 cases connected to the protest had been identified, on Thursday morning. A ministry staffer referred the question to the regional public health office, which has yet to respond.

The connection of Covid-19 cases to Parliament protesters has come during a week when the number of protesters has thinned, and there has been increased confrontation with police.