Remember Trevor the Duck who turned the sprinklers on at the convoy protest at parliament in Wellington? 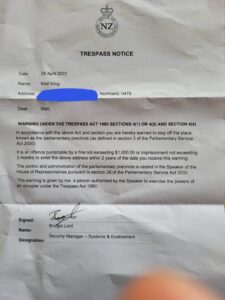 Matt King recently received a trespass notice 2 months after he peacefully attended the Wellington freedom protest where he did not break any laws being there.

“This is yet another breach of our democracy, a total suppression of free speech – and just the way this government tries to control and stop people from speaking up for what’s right. This is yet another reason I started DemocracyNZ – we cannot let this rubbish carry on.”

“The courts have found the lockdown was illegal, the mandates were illegal, and MIQ was illegal. Can anyone name one significant aspect of the COVID response that hasn’t been found to be illegal? Their modus operandi seems to be tyranny.”

And here is his “sin”

And another retired MP, Stephen Franks