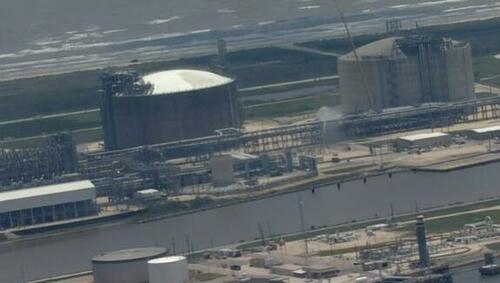 Update (1749ET): The explosion at Freeport LNG at Quintana Island has forced operations at the oil and gas export facility to be halted “for a minimum of three weeks,” according to local news KPRC.

Freeport receives about 2 billion cubic feet of gas per day or roughly 16% of the total US LNG export capacity. This means LNG exports will shrink and result in more supply on the grid, pushing down natural gas prices.

Here’s earlier footage of the explosion.

A “small explosion” at Freeport LNG terminal in Surfside Beach, Texas, resulted in the plunge of natural gas futures on Wednesday afternoon.

Local news KHOU reports the incident occurred around 1140 local time in the 1500 block of Lamar Street at the facility on Quintana Island.

“We are in the process of monitoring the situation and will provide information accordingly,” Freeport’s Director of Corporate Communications Heather Browne told The Facts.

The Facts posted a picture of the export terminal showing black smoke rising from the facility.

Criterion points out that the facility is the fourth largest in the US in terms of flows. Freeport receives about 2 billion cubic feet of gas per day, or roughly 16% of total US LNG export capacity.

For those puzzled by the price action, US NatGas’s slump is in response to the prospect that fewer LNG exports would mean more supply domestically, though inversely, it would mean higher prices in Europe since the US has been increasingly sending LNG across the Atlantic to ween European countries off Russian supplies.

Criterion sheds more color on the importance of the Freeport LNG terminal and how a disruption at the facility could push more supply back onto the grid.

It’s very early and the situation is still developing, but we can give a bit of background on the situation and potential worse-case impacts.Through the first eight days of June, Freeport has been receiving an average of 1.95 Bcf/d and the facility’s latest high was 2.0 Bcf/d this morning.

Assuming the worst-case scenario is a complete facility outage through the end of October, Freeport LNG’s incident could push back an average of 1.95 Bcf/d to the grid and add +285 Bcf to storage. Even a two-month outage through July 2022 would add +105 Bcf to inventories.

The other factor to keep in mind is that it is smaller, but Freeport does pull a good amount of power from the grid. According to the EIA, the electric-driven facility pulls 690 MW of power supply when fully operational.

Others seem to be agreeing with Criterion’s view:

With almost three-quarters of US LNG heading to Europe in the first four months of this year, this ‘explosion’ has the potential to seriously up-end global natgas supplies.

Will Putin is blamed for this explosion? We doubt it because…

Europe’s natural gas prices jumped Thursday after one of the US’ largest liquefied natural gas (LNG) export terminals experienced an explosion on Wednesday and has been shut down. A large share of the terminal’s LNG has been destined for Europe as the continent weens off Russian supplies.

Been in the Freeport area all day for an “incident” at LNG facility on Quintana Island. Freeport PD and witnesses say no doubt about it: it was an explosion. 💥 The fire/release has been contained and employees are accounted for. Investigation underway. pic.twitter.com/8wuGEGazb2

“In the last three months, 68% of all Freeport cargoes were delivered into European markets,” said Tom Marzec-Manser, head of gas analytics at ICIS.

Dutch front-month gas, the European benchmark, traded as high as 16% before giving up some gains and trading at 84 euros per megawatt-hour.

After the reports of the explosion, we noted that US natgas was sold due to export halt fears would build supplies on the domestic grid; inversely, EU natgas would soar because of a decline in export shipments.

For those puzzled by the price action, US NatGas’s slump is in response to the prospect that fewer LNG exports would mean more supply domestically, though inversely, it would mean higher prices in Europe since the US has been increasingly sending LNG across the Atlantic to ween European countries off Russian supplies.

Since the incident at Freeport, US natgas prices have plunged 15%.

Analysts at Houston-based energy firm Criterion Research said, “very little information is known about the extent of the damage and how long it will take to repair.”