Joe Biden appeared to defy the laws of physics 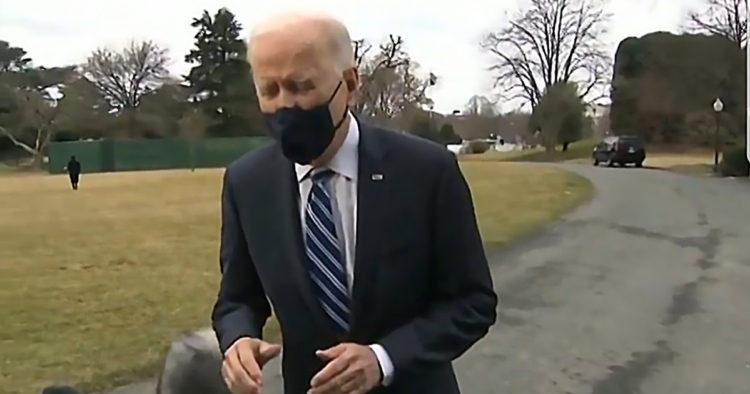 Many Twitter pundits are sounding the alarm about a video of Joe Biden briefly speaking to the press before boarding Marine One earlier today. Biden, who appeared flummoxed while briefly answering questions, appears to phase through a microphone when his hands, which are in focus, somehow jut in front of a seemingly out of focus microphone. Additionally, Biden’s hands appear much smaller than the microphone.

In the video, Biden declares he has no plans to visit the southern border amid the largest migrant crisis the country has seen in over a decade. Approximately 8 seconds into the clip, Biden’s in-focus hands somehow cross in front of a much larger microphone that is seemingly held by a member of the media. The microphone appears out of focus in the clip.

“Look at Biden’s hands and the reporter’s fuzzy microphones in the foreground at 0:10,” wrote America First host Nick Fuentes. “This footage has been digitally altered.”

Sometime Mike Adams has good stuff (usually on health). At other times he seems nuts

(Natural News) It’s now fully confirmed: Joe Biden is a fake digital mirage, and his “presidency” is completely staged using green screens and video compositing. This is why there’s no actual Joe Biden at the Oval Office, and it’s why the White House is dark. It’s also why there has been no State of the Union address.

Some speculate that Biden may already be dead. Others think he’s so ill that the green screen video producers have to use Biden body doubles to wear masks and act out the Biden scenes, which are then later composited and released to the public to create the illusion that Biden is still functioning.

Whatever the real explanation, we now know with 100% certainty that the Biden videos being released are completely faked, using multi-layered video compositing tricks carried out with horrific, glaring errors that any competent viewer should immediately recognize.

Yet, astonishingly, Democrats who watch this video don’t see anything wrong. This is true even when you point it out to them! They have literally lost the ability to cognitively function, just like Biden himself.

We are now living in a devolved libtard society, where Leftists are cognitively retarded, unable to see that their “president” is a CGI mirage, and incapable of observing reality.

In today’s Situation Update podcast, I cover this truth and much more, including a discussion of the libtards who run The North Face outdoor clothing company, none of whom have any idea where polyester comes from (hint: it comes from oil) and yet are fully dedicated to publicly demonstrating their own shocking stupidity.

I also discuss the collapse of liberal cities like Philadelphia and how the upcoming George Floyd trial decision will likely be used to promote more mass chaos across America, perhaps launching into a race war against Whites.

omorrow’s podcast will also be stunning. We are running experiments with Democrats by showing them the Biden video with the CGI compositing errors, and they are not seeing it! They are suffering from “negative hallucinations” and literally cannot see reality right in front of them. This is a stunning realization and I will cover it in more detail in tomorrow’s podcast at: