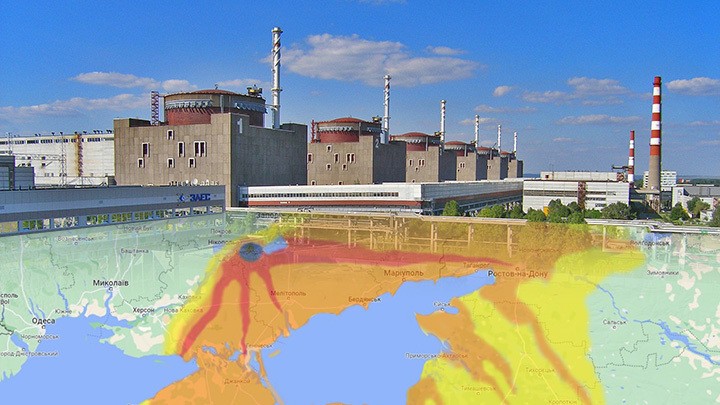 Is it possible that the Kiev regime would attack the nuclear reactor and blame it on the Russians?

Make sure to read the article, Chernobyl, Fukushima Scenario Possible at Zaporozhye NPP Amid Ukraine’s Shelling – Authorities, below.

The roof of the building has been damaged as a result of the attack, Vladimir Rogov, the spokesman for Zaporozhye Region’s administration, said on Telegram.

He also posted a photo of a hole in the roof that was supposedly caused by the strike.

The affected storage facility holds fresh nuclear fuel for the reactors of the plant, which is the largest in Europe.

Russia said earlier that a Ukrainian drone targeting the nuclear facility had been shot down.

Moscow has repeatedly accused Kiev’s forces of targeting the Zaporozhye nuclear power plant – which has been under Russian control since March, but operated by Ukrainian staff – with artillery and ‘kamikaze’ drones.

Moscow urges ‘all nations’ to pressure Kiev over nuclear site

It warned that those attacks could trigger a disaster that would eclipse the 1986 Chernobyl incident. Radioactive material could potentially reach Poland, Slovakia, Romania, Moldova, Belarus, and even Germany in a worst-case scenario.

Ukraine, meanwhile, has claimed that the Russian forces have turned the nuclear plant into a military base and that they’ve been shelling the facility themselves to pin the blame on Kiev.

Russia has repeatedly denied those accusation and urged for international inspectors to visit the site to assess the situation for themselves.

Earlier on Monday, International Atomic Energy Agency head Rafael Grossi announced that such a mission will take pace after all, with IAEA specialists expected to arrive at the Zaporozhye plant this week. MELITOPOL (Sputnik) – A possible accident at the Zaporozhye nuclear power plant (ZNPP) resulting from the shelling carried out by the Ukrainian military could be comparable in consequences to the Chernobyl and Fukushima nuclear disasters, the head of the regional military-civil administration Yevgeny Balitsky told Sputnik.
“In the event of radiation release, the consequences will be catastrophic not only for the Zaporozhye region. It will be a situation equivalent to what happened at the Chernobyl nuclear power plant and in Fukushima,” Balitsky said.
“Experts believe that if the backup diesel generators and mobile pumps fail, the core will overheat, as a result of which the reactor plant will collapse, radioactive substances will be released into the atmosphere, and then they will spread hundreds of kilometers away.”
He warned that a possible accident at ZNPP, resulting from the constant shelling by Ukrainian troops, could become a catastrophe for Europe, and radiation could spread to the Crimean Canal and the Black Sea.
“The Chernobyl accident affected dozens of countries, and the Zaporozhye nuclear power plant is the largest in Europe, so everyone should be aware of this,” Balitsky told Sputnik.
The Russian Defense Ministry said on Sunday that the Zaporozhye nuclear power plant had been shelled again by Ukrainian troops. Three shells fell in the area of a special building of the ZNPP, which stores new TVEL nuclear fuel and solid radioactive waste. One shell fell next to the ZNPP’s sixth power unit, and five others landed opposite a pumping station, which provides cooling for one of the reactors.
For the sake of transparency, this article comes from Tsargrad, a conservative, Orthodox TV station that reflects the views of eurasian philosopher, Alexander Dugin.
Bias is not the same as disinformation.

“RADIATION WILL COVER THE SOUTH-WEST OF RUSSIA”: IN UKRAINE, THE DATE OF THE MAIN STRIKE ON THE ZAPORIZHZHYA NUCLEAR POWER PLANT WAS NAMED?

While the IAEA is preparing a mission to visit the nuclear power plant, ukroreykh continues to strike at its territory. Apparently, they are marking in the storage of nuclear fuel and waste.

The Ukrainian Energoatom, the operator of the Nezalezhnaya nuclear power plant (of which there were four until recently, but after the Zaporozhye station came under the control of Russian troops, there were three left), published a “wind rose” for the next Monday – August 29. According to these forecasts, in the event of an accident at the ZNPP, a radioactive cloud will form, which will pass over the Crimea, the Rostov Region, the Krasnodar and Stavropol Territories, and, of course, over the liberated territories of Donbass.

Another horror story to stir up panic? With a very high probability, yes.

Recently, however, there has been increased pressure in the Western and Ukrainian media that there is a large Russian military base at the nuclear power plant. And therefore, they say, it is necessary to strike at it. However, there is no single position on who exactly hits the station in the foreign media space. Sometimes, even in one publication, the same song is first cited about the “occupation” of the territory of the nuclear power plant by our troops (in huge numbers), the presence of which “provokes” the AFU to attacks, but then it is indicated that we ourselves are hammering with missiles – in our own way, it turns out .

Zaporozhye NPP is located on the left bank of the Kakhovka reservoir, through which the Dnieper passes. This is the largest nuclear power plant in Europe and the third largest in the world, whose six power units produce a total electrical capacity of 6,000 megawatts, it provides electricity to about a third of Ukraine, where it comes via four transmission lines (three of them are designed for 750 kV and one – at 330 kV).

More precisely, it did. Because a couple of days ago, the army of the ukroreich interrupted all four power lines in turn with aimed fire. But this is rather a problem of the territories controlled by Kiev , since they are deprived of light.

Another thing is that the Zelensky regime continues to shell the nuclear power plant itself . Only in the past day, according to the Russian Ministry of Defense, there were two artillery raids. Moreover, they hit accurately: they fired nine shells, three of which were fired into the area of ​​​​special building No. 2, where new nuclear fuel from TVEL (part of the fuel division of Rosatom) is stored, as well as solid radioactive waste. Another shell fell in the area of ​​​​the 6th power unit, and five others – opposite the sixth block pumping station, which provides cooling for the reactor.

Yes, the source of the shelling was established – the firing points located in the area of ​​Maryevka (this is forty kilometers in a straight line on the right bank of the Dnieper) were suppressed by return volleys from our side.

The radiation background at the station is normal, the Ministry of Defense specified. And yet.

The situation looks extremely dangerous. Although the reactors themselves, thanks to their powerful external protection  , are almost pointless to attack – in any case, with the weapons that Ukraine has, it is alarming that it was the special building No. 2 mentioned in the report of our military, as well as the reactor cooling system, that were targeted.

Since 2001, the ZNPP has been operating the Dry Spent Nuclear Fuel Storage Facility (DSSF), but this is a very serious matter. Waste is stored in concrete containers, there are several hundred of them. And now a direct hit on them, albeit also, of course, quite strong, can lead to catastrophic consequences.

Against this background, the Ukrainian Energoatom published the so-called “estimated forecast” indicating the “wind rose” for August 29. And, as if in mockery, the power engineers of Nezalezhnaya rolled out advice on how to act for the population in the event of the spread of infected air masses: “carry out iodine prophylaxis,” “seal the premises,” “introduce special operating modes for schools and kindergartens,” and so on. 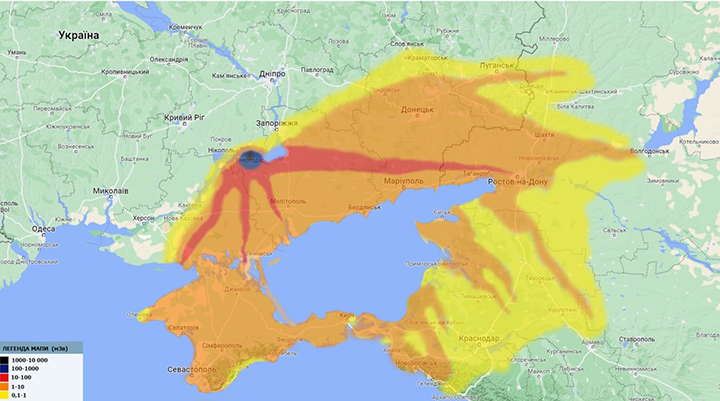 PHOTO: SCREENSHOT FROM THE WEBSITE OF THE UKRAINIAN COMPANY ENERGOATOM

It is clear that the purpose of the warning opus is to cause panic. However, literally at the same time as his appearance, the Minister of Foreign Affairs of Ukraine Dmitry Kuleba rolled out a threat on social networks , saying that “Russia’s actions at nuclear power plants endanger the whole of Europe” – like that, no less.

The Russian military must get out of the station – they have nothing to do there,

Not bad? In fact – blackmail, direct and undisguised.

But right now the International Atomic Energy Agency  (IAEA) is preparing a special mission to visit the Zaporozhye NPP. According to The New York Times, it will include thirteen specialists from Argentina, Poland, Lithuania, Albania, France, Italy, Jordan, Mexico, North Macedonia, Serbia and China. But neither the US nor the UK will be in the mission.

The last circumstance seems to be pleasing – on the one hand, and on the other, it looks strange. Why didn’t the Americans and the British, who are so actively participating in the events in Ukraine, put their experts in the IAEA group, at least in the role of spies? And there are no Germans.

What does this mean? Are Western curators aware of some impending provocation? Let’s hope that our special services are also actively pursuing this topic – and suggest options for action in various scenarios.

Political scientist, director of the Institute for Political Studies Sergei Markov sees the options for the development of a “nuclear crisis” at the Zaporozhye NPP as follows: 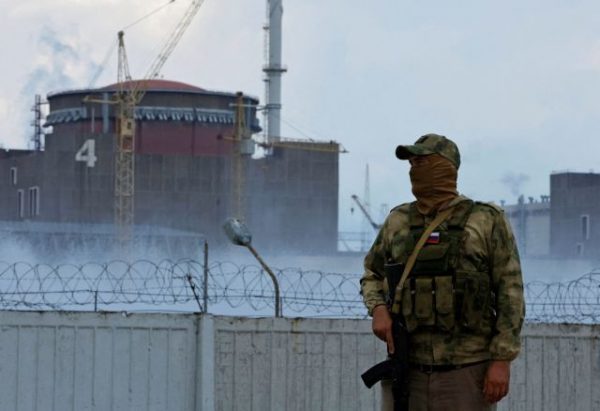 Russia’s forces that own the Zaporizhia nuclear power plant announced on Sunday that they had to shoot down a Ukrainian military kamikaze drone that was targeting a nuclear waste storage facility.

“Russian troops shot down a Ukrainian kamikaze drone, which was targeting a nuclear waste storage facility, judging by the trajectory of the flight ,” wrote the military-civilian administration of the city of Energodar on its Telegram channel, as reported by Tass.

On the reactor safety cover

“The drone fell on the roof of the special building of the factory. The ammunition was detonated when it hit the ceiling. However, sources in the administration say that no one was injured and no infrastructure was damaged,” he added.

Its debris fell on the safety cover in a reactor after it was shot down, Russian media reports, as reported by APE.

According to reports, it is estimated that the aircraft was sent to hit a spent nuclear fuel storage facility.

The ordnance it was carrying exploded without causing injury or damage.

Continued attacks by the Ukrainians

The Zaporizhia nuclear power plant is located in the city of Energodar and is controlled by Russian troops.

In most cases, such attacks were repulsed by air defense systems, but several shells hit infrastructure facilities and the nuclear waste storage area.

No one knows what the extent of the destruction will be from a possible missile strike on the Zaporizhzhya nuclear power plant, with the concern for a new…Chernobyl being more evident than ever.

This nightmare, with potential implications for a large geographical area of ​​Europe, has now settled over the old continent, reinforced by last Thursday’s extremely disturbing event: the Zaporizhia nuclear plant – Europe’s largest – was cut off for hours from the electricity network, under questionable conditions, which are however directly related to the military conflicts in the surrounding area.