“If they wanted to kill civilians why not just start shelling the city? Why wait for them to start leaving. It makes no sense.

Russia surrounded Kiev days ago and hasn’t performed a full scale assault yet. Instead they left one road open and told the civilians they can leave via it.

In truth if civilians leave it becomes easier for the Russians, since they are free to shell the fighting resistance that remains there. The resistance is using the people as cover and cannot let them leave. It makes much more sense that the resistance killed them to make the people scared to leave.”

This is what we get from the West. 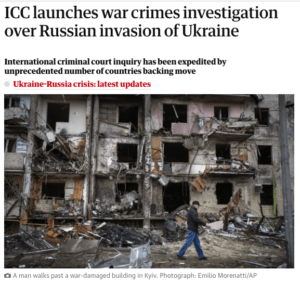 And what they are telling us

There are ‘signs’ the Ukrainians could win war

This is a collection of stories from the Russian side

“This is what the Zelensky Regime is doing: Setting up false flags against civilian targets so as to blame the Russians and have a public relations victory.

You only do that when you cannot achieve a military victory.” 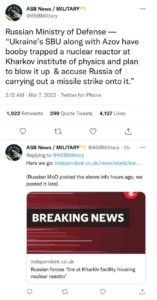 Russian forces have fired rockets at a physics institute in Kharkiv, which contains nuclear material and a reactor, Ukraine‘s national security service has claimed.

– Security Service UkraineThe strike on the nuclear facility comes on the eleventh day of the invasion and the security service said it risks a “large-scale ecological disaster”.

It claimed that Moscow’s forces are firing missiles from truck-mounted “Grad” launchers, which do not have precise targeting, raising concerns that one would go astray.

The Russian Defense Ministry noted that “on March 6, foreign journalists arrived in Kharkov to register the consequences of the provocation, followed by accusing Russia of creating an environmental disaster”

MOSCOW, March 7. /TASS/. The Ukrainian Security Forces and the nationalist Azov battalion are planning to blow up a reactor at the National Research Center of the Kharkov Institute of Physics and Technology and accuse the Russian Armed Forces of launching projectiles at an experimental nuclear reactor, says Russia’s Defense Ministry on Monday.

“The Security Forces of Ukraine along with the militants of the Azov battalion are plotting a provocation with possible radioactive contamination of the area near the city of Kharkov. Nationalists mined a reactor at an experimental nuclear system located at the [National Research Center of] Kharkov Institute of Physics and Technology. The Ukrainian military and the Azov battalion militants are planning to blow up the reactor and accuse the Russian Armed Forces of allegedly launching a missile strike on an experimental nuclear system,” the statement says.

The Russian Defense Ministry noted that “on March 6, foreign journalists arrived in Kharkov to register the consequences of the provocation, followed by accusing Russia of creating an environmental disaster.”. 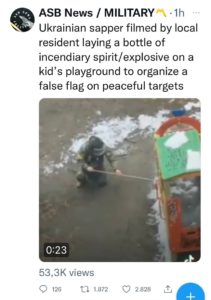 Here is the latest from Gonzalo Lira