South African authorities have “activated” 10,000 soldiers to help with emergency relief efforts in the flood-stricken KwaZulu-Natal Province after floods killed at least 443 people.

KwaZulu-Natal premier Sihle Zikalala released a statement that six days of heavy rains, triggering “flood disasters” now “rank as being among the worst catastrophes to befall the province of KwaZulu-Natal in a long time.” He confirmed Monday, the death toll now stands at 443, adding that 63 residents are unaccounted for.

“We sympathize with all those who lost their relatives and friends in the floods that attacked KwaZulu-Natal,” Zikalala wrote in a Facebook post over the weekend. “As a government, we will do everything we can to help our communities that have lost relatives and friends.”

In a separate statement, the South African National Defence Force said they would “activate” 10,000 troops to help with emergency efforts in the region.

Nearly a week of storms and flooding in the southeastern coastal province has displaced tens of thousands of residents, destroyed infrastructure, demolished homes and commercial buildings, and left the region in ruins.

“The infrastructure that has been damaged includes houses, schools, roads, bridges, buildings as well as economic and business infrastructure,” local paper The Witness wrote.

Footage of the flooding has been posted on social media.

Rivers have overflown, cars swept away and properties damaged in the heavy rain.

45 people have died since the floods started. pic.twitter.com/AIL26ctslW

Province in south africa called Kwa-zulu natal was hit with huge amounts of rain over the last couple of days, flash floods, landslides, mudslides and devastating damages to homes, businesses, cars other property. This is a small amount of footage from the road conditions here. pic.twitter.com/DoFVNY7dwQ

Sad images of flooding in Durban South Africa. Opposition parties in South Africa are not blaming Government for this natural disaster

If it was Zimbabwe, Hopewell and Chamisa will be shouting to the world saying the floods were caused by corruption. We have a cursed opposition pic.twitter.com/9uHN9PrRbv

Flooding appears to have shuttered some operations at the country’s largest port in Durban.

Transport giant Maersk suspended some operations at South Africa’s biggest port because of damage caused after flooding that has killed dozens of people https://t.co/mLgB8sJip2 via @markets@thembile_cele@PrineshaNaidoo

A stunning photo of the widespread destruction at the port.

Footage of the flooding has been posted on social media.

Flooding appears to have shuttered some operations at the country’s largest port in Durban. 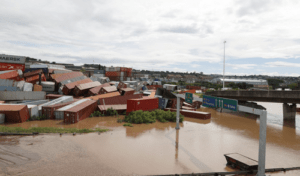 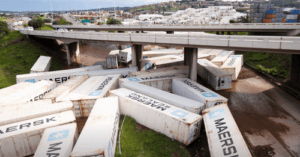 The flooding couldn’t have come at the worst time, as South Africa’s central bank warned last week that a continued economic recovery was threatened by inflation. It remains to be seen how weather-related destruction of a top economic-producing province will affect inflation and the overall recovery. One would assume this can’t be good.