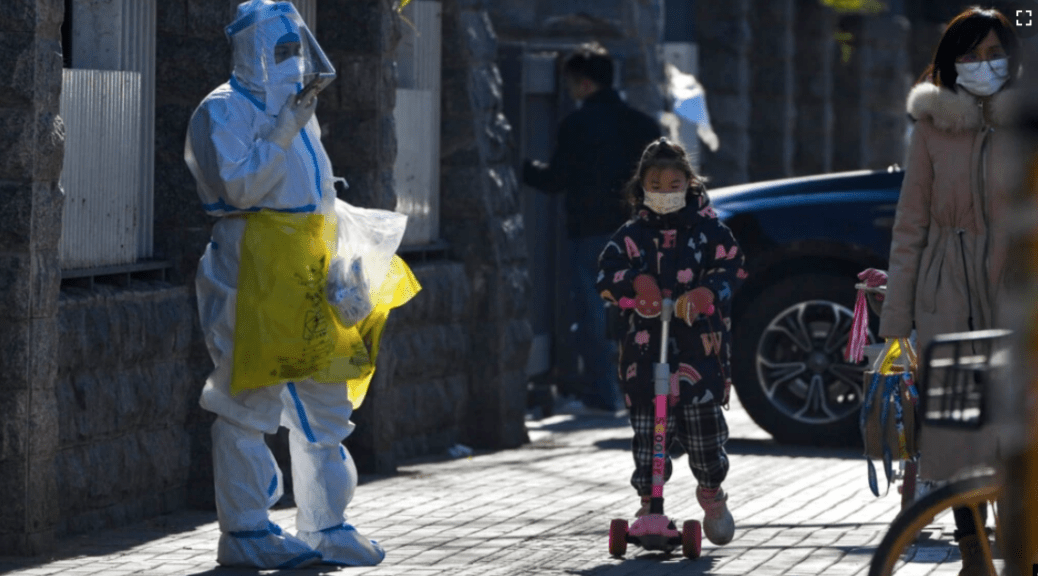 These are the headlines coming out today from mainstream media.

Cities across China further unwound COVID restrictions Friday, loosening testing and quarantine rules in the wake of nationwide protests calling for an end to lockdowns and greater political freedoms.

Anger and frustration with China’s hardline pandemic response spilled out onto the streets last weekend in widespread demonstrations not seen in decades.

In the wake of the unrest across China, a number of cities have begun loosening COVID-19 restrictions, such as moving away from daily mass testing requirements, a tedious mainstay of life under Beijing’s stringent zero-COVID policy.

At the same time, authorities are continuing to seek to contain protests with heavy security on the streets, online censorship in full force, and surveillance of the population heightened.

This is the more trustworthy Indian media reporting

Chinese President Xi Jinping has acknowledged the frustration within China amid his government’s unrelenting zero-Covid strategy, a European Union official told CNN, in his first known remarks on the protests that have erupted across the country in recent days.

Xi told visiting European Council President Charles Michel in Beijing on Thursday that the protesters were “mainly students” who were frustrated after three years of Covid, and hinted at the potential relaxation of China’s prevention measures, an EU official told CNN Friday.

The official spoke on the condition of anonymity, citing European professional norms.

However, the official could not confirm if Xi uttered the word “protest” in Mandarin, or say what wording exactly was used by the Chinese leader to describe the recent unrest over the restrictions.

That’s 24 hours after Jennifer Zeng posted this short extract from a speech from Xi Xinping.

Jianli Yang, a former political prisoner who was part of the Tiananmen Square protest

And then we have the Communist Party apologists. This is Brian Berletic (aka. Tony Carlalucci)

From what I have listened to he is saying these are just sporadic demonstrations “of no importance” – no more than a hundred people in a land of one billion people.

The “Colour Revolution” trope is well-and-truly overdone and needs lots of evidence in support. I have little doubt that our friends in the CIA and other intelligence organisations will exploit everything that undermines the Chinese government as they did in Hong Kong.

However, it is a bit much to contend that the US Embassy has a switch where they can turn on a “rent-a-protester” mob at will.

The Chinese people do have a will of its own and have reached the end of the tether with the CCP’s Zero Covid policies. It all reminds me of Communists and fellow travellers in the 70’s who attacked Solzhenitsyn and others and denied the existence of the Gulag.

Berletic is a scumbag in my mind who will say anything – such as ‘there is no such thing’ as a Social Credit policy in China. None of these people like Berletic (or Serpentza on the other side of the equation) have anything to say about covid policies in the West.

For them it doesn’t exist. I have known the nature of the Chinese regime for years after reading the book, Wild Swans.

It is worthwhile listening to Jung Chang.

These Chinese dissidents are all pro-Western and that is entirely understandable since the West gave them freedom.

The criticism of China, compared to their venom towards everything Russian is fairly half-hearted.

WEF’s Klaus Schwab: China is a “role model for many countries”

The media talks selectively about the demonstrations in China and the crackdown, brutal as it is while in the usual hypocrisy and double standards ignore what went down (and is still going down) in the West.

We had Justin Trudeau with his half-hearted criticism of the Chinese leadership “suggesting” the people of China have the right to protest.

Are we to forget what he did to the truckers there when they tried protesting against the very same policies the Chinese are protesting about?

I don’t really think any of these people mean it.

There is plenty of misrepresentation, propaganda and double standards to go round.

One thought on “Focus on China”