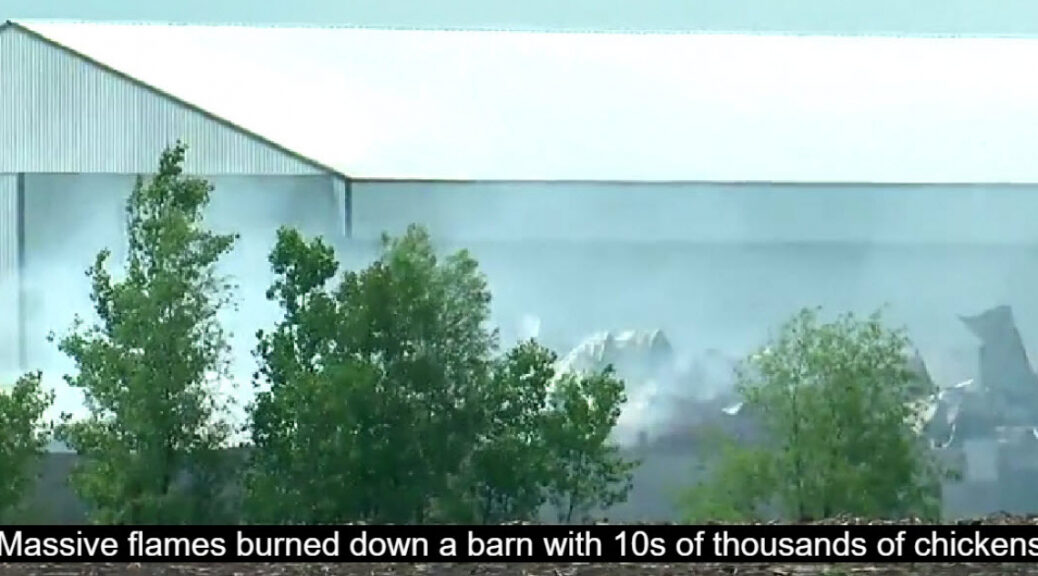 The United States of America is obviously under planned attack of its food supply and food distribution network.  The people doing this must be found and “stopped” by any means necessary.

Massive flames burned down a barn with tens of thousands of chickens in Wright County, Minnesota over the weekend.

The Trebesch family thought they would spend Saturday night around their bonfire, but just after 10 p.m. they noticed massive flames across the field at Forsman Farms.

“It was unbelievable how quick it grew, it was insane,” Andy Trebesch said. “It was the whole sky, it was quite large.”

They called 911. Firefighters from multiple agencies across Wright County showed up, many volunteer firefighters. A barn housing tens of thousands of chickens was leveled, in what a farm spokesperson called a “tragic accident.”

According to Forsman Farms website, the farm started in 1918, and now the fourth-generation family farm sells more than three million eggs a day to some of the nation’s largest retailers.

“Overnight, a fire destroyed one of our barns at our Howard Lake farm. No one was injured and we are grateful that first responders were quickly on scene to put out the fire. Unfortunately, chickens were lost because of the fire. We are evaluating the extent of the damage – which appears to be confined to a single structure – as well as investigating the cause of the fire,” a Forsman Farms spokesperson said.

In April, the tragic destruction by fire of the headquarters of Azure Standard in Oregon shocked millions of people, and since that news broke quite a few readers have been reaching out to me about the long string of unusual blazes that we have been witnessing from coast to coast in recent months.  I decided to look into this phenomenon for myself, and I am sharing what I have discovered so far in this article.  Dr. Benjamin Braddock and others had already been digging into this, and their research proved quite valuable as I began my investigation.  Some of the incidents that people have reported I was not able to independently verify, and others I felt were too minor to be put on this list.  With all that being said, the following is a list of 16 major fires that have occurred at key food industry facilities in the U.S. since the start of 2022…

As the smoke settles near Taylor Farms, questions remain on the future of the business and the roughly 1,000 people employed at the Abbott Street facility.

There is little to nothing left of the processing facility due to fire and smoke damages caused by Wednesday night’s blaze, according to Deputy Fire Chief Sam Klemek.

Multiple workers are hospitalized following an explosion at a food processing facility that has nearby residents on alert for possible evacuation.

The explosion occurred Tuesday evening at Shearer’s Foods in Hermiston, a city in agriculturally rich eastern Oregon. No deaths have been reported from the blast, but the extent of the damage to the plant and its future were not clear. City officials are concerned what the fire could mean for the community and local economy.

Neighbors banded together to support crews as they battled a fire in Conway for about 16 hours Monday night.

More than 12 departments and agencies worked together to put out the fire at East Conway Beef and Pork.

On March 31, 2022, a structure fire significantly damaged a large portion of the largest fresh onion packing facilities in South Texas.

“The situation at our Jonesboro factory is under control and we are looking into the cause of the fire,” a Nestle spokesperson said. “Thankfully, no employees were injured and all are safe. We appreciate the quick response of the Jonesboro Fire Department and emergency response teams. The factory will remain closed as we assess the damage and return the factory to full operation. We plan to continue to support our employees financially during this time.”

Nestle opened the plant in 2002 and in December 2020 the company unveiled plans to invest more than $100 million to expand the frozen foods plant, including the addition of 90,000 square feet and a new production line for Hot Pockets frozen sandwiches. In addition to Hot Pockets, Nestle makes products under the Stouffer’s, Lean Cuisine, DiGiorno, Tombstone and Sweet Earth brands at the plant.

A portion of Mauston’s Wisconsin River Meats burnt down during an overnight fire Feb. 2-3, with the cause of the fire still under investigation.

“The old portion of the plant is a total loss,” Wisconsin River Meats said in a Facebook post about the fire. “We humbly ask that you be patient and please give us some time to sort out the cause of the fire and for us to transition some of our business and invoicing to our warehouse.”

Operating from what company officials referred to as the command center at Deli Star Corp.’s St. Louis Innovation Center, the Siegel family-led operations and executive team have spent the week scrambling to fulfill customers’ orders and work with local officials investigating a Jan. 11 fire that destroyed its 75,000-square-foot processing plant in Fayetteville, about 40 miles southeast of them.

Fire crews from several towns have been battling a fire at the Penobscot McCrum potato processing plant in Belfast. Crews were called to the scene at 28 Pierce Street around 3:30 a.m., according to Maine Department of Public Safety spokesperson Shannon Moss.

A fire at a fertilizer company in western Kansas prompted evacuations Tuesday afternoon because hazardous materials were involved, officials said.

Louis Dreyfus Company (LDC) said on Wednesday a fire had broken out in a bag house at its Claypool, Indiana, soybean processing and biodiesel plant on Tuesday and the affected systems had been suspended.

No employees were injured and the fire was put out by 9:15 p.m. central time on Tuesday, LDC said in a statement. LDC’s website said soybean deliveries were suspended at the plant on Wednesday. LDC says Claypool is the largest fully integrated soybean processing and biodiesel plant in the United States.

An uncontrolled fire at a fertilizer plant in North Carolina forced thousands of people to evacuate as firefighters stood back Tuesday because of the danger of a large explosion.

Authorities drove through neighborhoods and knocked on doors asking residents to leave within a one-mile radius (1.6 km) of the Winston Weaver Company fertilizer plant on the north side of Winston-Salem, where the fire started Monday night. Overnight, bright orange flames and thick plumes of smoke could be seen shooting into the sky. No injuries were reported.

The fire destroyed one storage building on the southeast corner of the fertilizer storage facility in the Port of Sunnyside and damaged others, but adjacent Nutrien buildings and storage tanks containing hazardous chemicals were spared, Anderson said Monday evening.

A fire started at the Cargill-Nutrena feed mill in Lecompte, LA in the early hours of Thursday morning and burned for 12 hours, coverage by local television news station KALB said. An explosion reportedly occurred as firefighters were working the scene.

It’s a long road to recovery for Maricopa Food Pantry after a fire destroyed around 50,000 lb of food. The fire happened just 15 minutes after their food bank closed on Monday morning. Smoke was still coming from the rubble 24 hours later. “It had to be 40-50 feet in the air, just pure black smoke. It engulfed the entire neighborhood,” said Maricopa Food Pantry President Mike Connelly. “The heat we could feel down at the corner.”

The headquarters of Azure Standard, the nation’s premier independent distributor of organic and healthy food, was destroyed by fire overnight. There were no injuries. The cause of the fire is unknown and under investigation. The loss of the facility and the impact on companywide operations is being assessed and expected to be limited and temporary. No other Azure Standard facilities were affected.

Investigators from the ATF’s National Response Team began its on-scene investigation on Friday into the massive fire at a Walmart facility in Plainfield.

The team, led by Supervisor Christopher Forkner, is working with the Plainfield Fire Territory, Indiana State Fire Marshal’s Office and the Plainfield Police Department, according to a press release. ATF special agents from the Indianapolis Offices of the Columbus Field Division will also be assisting.

Of course it is not unusual for there to be fires at food industry facilities, and fire departments are accustomed to responding to such fires and putting them out.

But in many of these cases, we are talking about absolutely uncontrollable fires that seemed to erupt very suddenly.

And in many of these cases the firefighters that responded were not able to save the structures because the fires were so enormous.

Needless to say, the collective loss of all of these facilities will make the coming food shortages quite a bit worse.

It seems to many people this string of fires is not accidental.   It seems the American people are under attack.

Whoever is perpetrating this, needs to be “ended.”

What is the deal with all of the food processing plants getting destroyed? 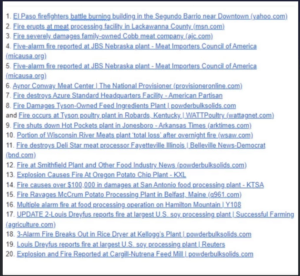 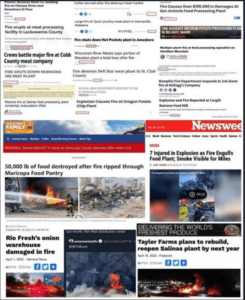 An observing alien species would ask itself, “Why is humanity destroying ALL of their food sources?” In this special Ice Age Farmer broadcast, Christian has a candid conversation about the overwhelming number of attacks on our food supply.

With crops unplanted and with more food facilities burning down, the media runs stories about “food fire conspiracy theories.”

And it’s not just chickens — the state is also killing deer and fish in the name of stopping diseases.

One thought on “Food supply under attack”