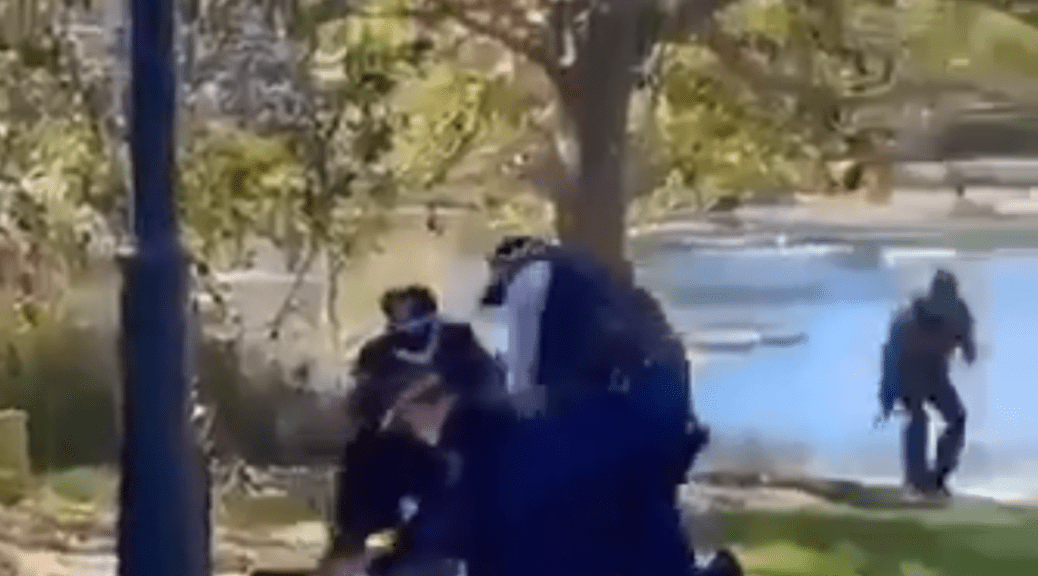 This video from Sydney, Australia was labelled as “showing uniformed police officers TASERING citizens, tackling them, and force-vaccinating them in public”

Commenters on the ground have said it is not that. At best, one cannot distinguish what is going on.

Australians who merely post anti-lockdown information online could face fines of up to $11,000 under a draconian new piece of legislation.

Under the proposal, which is being pushed by the opposition in in New South Wales, protest organizers would be fined a whopping $20,000 and people who attend would be fined $5,500.

However, the law would punish “people sharing information on social media about illegal rallies and inciting others to illegally attend” even more harshly, hitting them with $11,000 fines.

The onerous fines are intended to neutralize a protest movement that has grown in recent weeks over New South Wales imposing yet another brutal lockdown on its citizens, which is now being enforced by military occupation of Sydney.

Shadow Police Minister Walt Secord said the massive fines were needed to “throw the book at these idiots who spread misinformation and lies along with the Delta variant.”

Fines for not wearing masks, which are now compulsory even outdoors, are also set to rise to $500.

Minister for Police and Emergency Services David Elliott even bragged about how many calls – a total of over 15,000 – had been received from people reporting on others for attending “illegal” protests.

“The 15,000 calls to Crime Stoppers is a clear message to the government that the community expects action,” said Elliott.

As we previously highlighted, Australians have been placed under one of the most authoritarian lockdowns out of any major developed country.

A pregnant woman was arrested in her own home for planning an anti-lockdown protest on Facebook, while the state also gave itself the power to seize children from their parents and enter homes without a warrant under COVID-19 rules.

The chief health officer of New South Wales even went so far as to tell Australians that they shouldn’t “engage in conversation with each other,” even if they’re wearing masks, in order to reduce the transmission of COVID.

Australian MP Frank Pangallo also recently asserted that unvaccinated people “will need to be controlled and restricted” by authorities.

Queenslanders have been told to ‘go home now’ as parts of the state are plunged into a snap lockdown over six new cases.

Brisbane has been plunged into a three-day lockdown which the Deputy Premier Steven Miles has said will be the “strictest” enforced on Queensland throughout the pandemic.

From 4pm on Saturday, 11 Local Government Areas in southeast Queensland will be forced to stay home until Tuesday afternoon after six new local cases were reported.

Health authorities declared the only four reasons any residents in those areas can leave home after the new infections from the mystery cluster were confirmed to have contracted the highly infectious Delta variant.

Those few reasons to leave home include:

Australia’s highest ranking police officer – Federal Police Commissioner Reece Kershaw literally spelling out the crimes of how our “leaders” have hijacked our government & how they will be taken down under common law and the constitution. The end part is very interesting!

How do they know which is a Delta variant, or covid-19, or another coronavirus?

Australia has deployed hundreds of soldiers to Sydney to help enforce a Covid lockdown.

A Delta outbreak which began in June has produced nearly 3,000 infections and led to nine deaths.

Australian Defence Force soldiers will undergo training on the weekend before beginning unarmed patrols on Monday.

But many have questioned whether the military intervention is necessary, calling it heavy-handed.

The lockdown – in place until at least 28 August – bars people from leaving their home except for essential exercise, shopping, caregiving and other reasons.

Despite five weeks of lockdown, infections in the nation’s largest city continue to spread. Officials recorded 170 new cases on Friday.

Soldiers will join police in virus hotspots to ensure people are following the rules, which include a 10km (6.2 miles) travel limit.

State Police Minister David Elliott said it would help because a small minority of Sydneysiders thought “the rules didn’t apply to them”.

The Australian Lawyers Alliance, a civil rights group, called the deployment a “concerning use” of the army in a liberal democracy.

The outbreak has largely affected critical workers and large family groups in the city’s poorer and ethnically diverse west and south-west suburbs. About two million people live there.

Critics say those areas have already faced “targeted” policing measures. They point out restrictions there are harsher than for the rest of Sydney.

“Our people are one of the poorest demographics, and as it is, they already feel picked on and marginalised,” said Steve Christou, one local mayor.

“They can’t afford to pay the mortgage, the rent, the food or work. Now to throw out the army to enforce lockdown on the streets is going to be a huge issue to these people,” he told SBS.

Others have called for the government to increase its vaccine drive and support services for the affected communities.

Australia’s rate of vaccination – 17% of the adult population – remains one of the lowest among OECD nations.