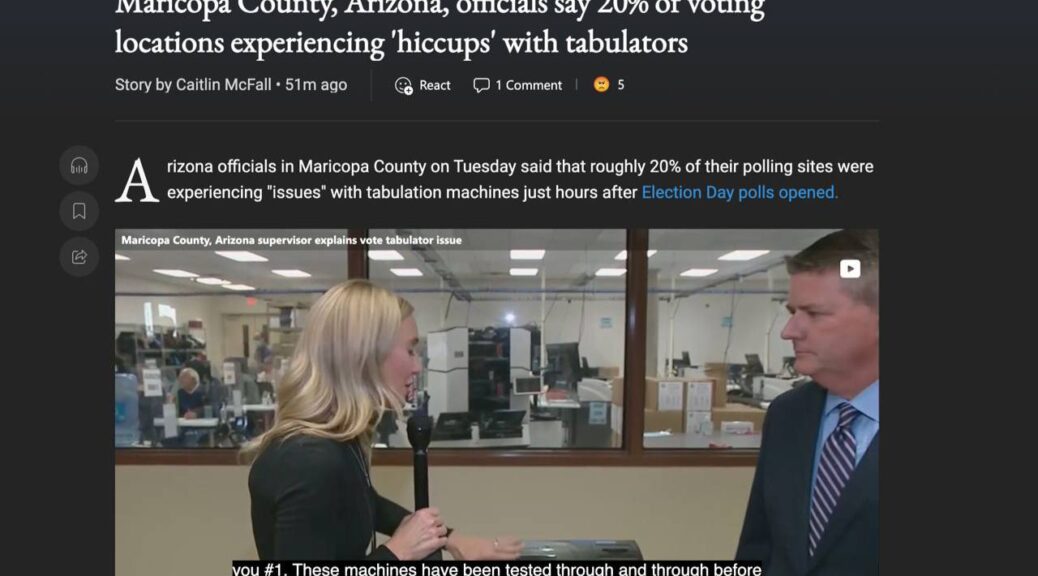 It’s very easy to see where this is going.

In a throwback to 2020, ABC News reports that a “red mirage” could make it look like Republicans are winning big on the night, but that a full vote count could take “weeks.”

The legacy news outlet has published an article titled ‘Early election night results might not indicate final tallies (and why that’s OK)’.

The piece explains how Republicans may “appear to be leading their Democratic opponents, even by large margins” in federal and statewide races, but that their leads “will dwindle, or crumble completely” after “dumps” of mail-in and absentee ballots are counted after election day, which could take “weeks”.

Why America can’t count all the votes on the night, as is done in countless other developed countries, isn’t explained.

“This phenomenon was popularized as the “red mirage” or the “blue shift” after the 2020 presidential election, when former President Donald Trump took a deceptive lead in several competitive states on Election Day due to delays in counting of Democrats’ mail-in ballots — their preferred method of voting due to the COVID-19 pandemic — only to eventually dissipate when the entire reserve of votes was totaled,” states the report.

However, the explanation that COVID-19 caused so many Democrats to use mail-in ballots on 2020 is also not a factor now given that all restrictions have been lifted and COVID is barely even a news story at this point.

“The red wave nearly every pollster is predicting is actually just a “mirage” ready to be corrected through “election fortification” and “perceived” late night ballot dumps,” commented Chris Menahan.

White House Press Secretary Karine Jean-Pierre also said yesterday that the vote count may take “days” to be sorted out, asserting, “That’s how this is supposed to work,” despite no such narrative being in place when Democrats performed well in the 2018 mid-terms.

Delaying the election result will almost certainly lead to a repeat of the chaos of 2020, and prompt more claims by Republicans of vote fraud and stolen elections.

Polls show that around 61 per cent of Republicans think Biden didn’t win legitimately in 2020, while nearly a third of Americans in total think Biden won thanks to voter fraud.

A recent Pew survey also found that a fairly slim majority of 56 per cent of Republicans think “the midterm elections in the U.S. will be administered very or somewhat well, with just 11% saying they will be run very well.”

According to the latest Washington Post forecast, Republicans are set to easily regain control of the House and will also flip the Senate, where they only need to gain one seat to claim victory.

Update (1535ET): Former President Trump has called for protests over voting irregularities across the country.

“The Absentee Ballot situation in Detroit is REALLY BAD. People are showing up to Vote only to be told, “sorry, you have already voted,” Trump wrote on Truth social. “This is happening in large numbers, elsewhere as well. Protest, Protest, Protest!“

20% of voting locations in Maricopa County are experiencing issues. 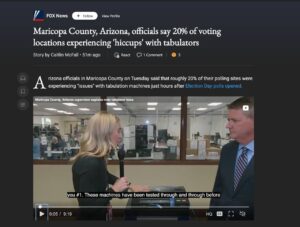 JUST IN: Guam Finally Flips! Elects Republican as its Delegate to US For the First Time in 30 Years

Guam elected its first Republican non-voting delegate to the United States in decades on Tuesday.

James Moylan is Guam’s first Republican to win this seat in approximately 30 years.

National Guard cyber units in at least 14 states are deployed in an attempt to protect election security during Tuesday’s midterm elections, according to the National Guard Bureau and multiple media reports.

THE FIX IS IN!… IT’S NOT JUST ARIZONA!

The polls opened in Maricopa County at 6 am, and already voters are being told that the tabulators are not working.

Katie Hobbs is the current Secretary of State in charge of elections.  She is failing – again!

Instead of tabulating their ballot directly, voters are being told to put their ballot into a box under the tabulator so that their ballot may be tabulated at a later time downtown.

Voters are told to just drop their ballot into the open door seen below.