The Call for a NATIONAL WORKERS & BUSINESS OWNERS STRIKE against Covid 19 Tyranny. 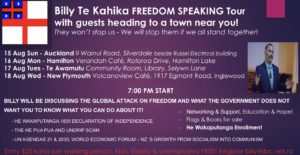 Liberty and sovereignty movement, Freedom Movement NZ believes that the Government is preparing for a National, alert level 4 + lockdown signalled by the Government’s increased and incessant work in promoting scientifically unsubstantiated fear around the Delta variant of Covid-19 and a carefully constructed media narrative.

The Government’s claim they would apply science based methodology specifically for the protection of the most vulnerable members of our community has proven to be false.

This is emphasised by the clear violation of the agreed parameters for the rollout of the Pfizer Biontech injection to be used only on those most at risk by the Sars cov 2 – Covid 19 virus – a virus that remains un-isolated.

The Government has violated its own guarantee that the injection would only be used under emergency conditions on the most at risk persons in our community.  In violation of Section 23 of the Medicines Act at the time, the Government broke this promise and the law by its broad rollout of the new, unproven, clinical trial phase Pfizer Biontech injection to include ALL New Zealanders and at some time in the future 6 months old babies. When legally confronted about this, the Government re-engineered the Medicines Act so that it no longer acted unlawfully.

This is a clear and significant breach of trust and good faith.

The country’s National Emergency status under which all lockdowns are justified, is based on the advice of internationally discredited Professor Shaun Hendy of Auckland University who declared that ‘we faced up to 85,000 deaths if we did not get our Covid-19 response right or up to 45,000 deaths even if we did’. This advice is no longer credible or able to justify the actions of the Government in it’s handling of Covid-19. Hendy’s ‘advice’ also provided the basis for the introduction of the draconian Covid-19 Public Health Response Act that is still in force despite there no longer being a scientific or health basis to justify any more lockdowns or the Act itself.   More reason to distrust the Government.

The Government in particular, Jacinda Ardern, has said there would be no policies or penalties such as ’No jab no job’ or requirements for New Zealanders to be tested or vaccine verified for travel BACK into New Zealand nor any development of a vaccine passport.  It is a fact these and more tyrannical actions are being implemented and are on the table including more ‘severe’ lockdowns.  Even more reason to distrust the Government.

Director of FMNZ Billy Te Kahika comments: ‘Any lockdown above Alert Level 2 is going to kill sick and distressed people and doom businesses already on the edge of collapse and it’s time to stand up against this tyrannical plan that cannot be justified in New Zealand on any honest scientific basis’.

‘It is clear we cannot trust anything the Government is telling us but one thing we do know is that the collateral harm that any high level lockdowns will cause is going be immense and I believe these impacts will cause greater harm than the ‘virus’ itself.

‘Those of us who are threatened by the consequences of a lockdown, coerced injection, loss of job and Minister Hipkins’ recent statement that he ‘Might have to go out and find people who are vaccine hesitant’ seemingly threatening our children need to stand up now’.

‘I am publicly calling for ALL workers and business owners, and especially border workers across New Zealand that are affected by these terrible actions of this out of control Government to strike for an entire day and then if that does not work until the Government changes its entire Covid-19 public health response strategy to one that is science justified and freedom respecting’.

‘To spread the word I am starting a speaking tour this Sunday in Auckland promoting this strategy and also the return of the authority of He Wakaputanga 1835 / The Declaration of Independence’.

‘This Government and genuinely fake ‘Crown’ is being given lawfully binding notice to stand down under the authority of the Maori Chiefs of the United Tribes under this lawful and perpetual declaration.  I announce that ALL races are welcome, respected participants in a new system that does not enslave people in a straw man corporate system and that is independent of all international treaties and programs that rob New Zealanders of our personal and national sovereignty & liberty that our ancestors fought and died to give us’

‘Like the French, English, Australians and many others are doing – Kiwi’s need to stand in unity and implement a national strike and implement mass civil disobedience of any declared lockdown’ or injection tyranny’.

’To this end I am in consultation with many groups who have responded even at this early stage to ensure that the message to Government is made clear – We do not consent!’