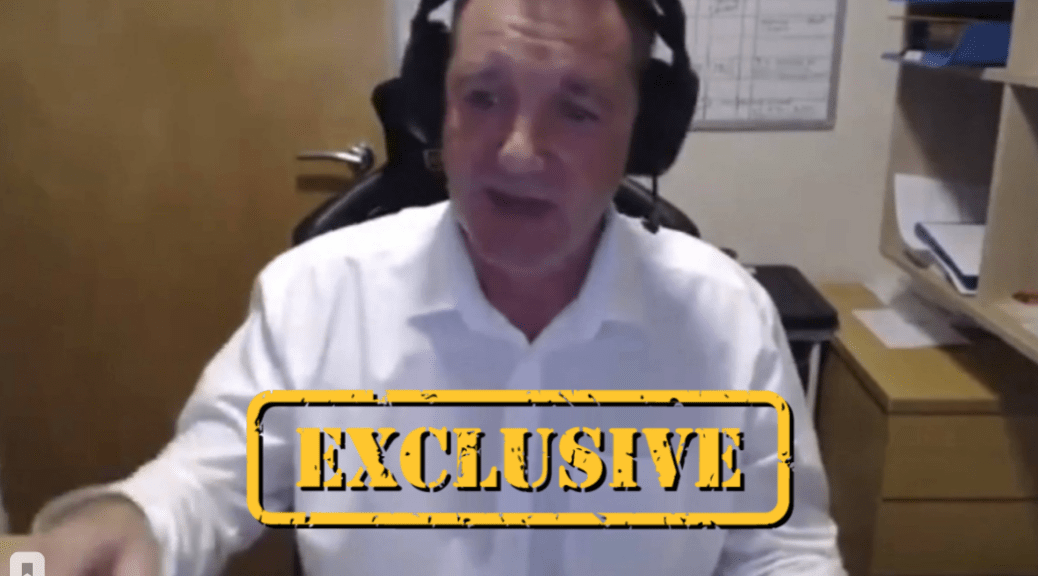 “One of the very first people to visit me bedside was a representative from Oxford University funded by the gates foundation begging me to trial new medicines (whilst being unable to look me in the eye) not even related to Covid – naturally I declined.”

This is the speech that John O’Looney would have made at yesterday’s pro-freedom demonstration in Milton Keynes and was kindly provided to us by Jeff Wyatt. John has asked that his words be spread as far as possible.

Sadly I was taken down 14 days ago with suspected Covid and whilst I have always said there is a “virus” I can confirm I genuinely believe this is man-made a man virus, in fact it is an awful virus. So let us make no mistake there is an enemy to face but does it require endless bouts of injections after injections after injections? Clearly not – all man made and man driven. I standby what I have said from day one has a funeral director I have seen first hand huge efforts made to deliberately and inflate Covid death numbers.

There were no excess deaths in 2020 – it is that simple and nothing will change my mind all the minds of those in the industry who have their eyes open to this lie – and there are many.

The reality is the death rate only soared the moment they began putting needles into arms in January 2021 You can believe it or not but I was one of the people picking up these poor souls and a huge amount of them.

Fast forward and now we see a huge increase in thrombosis related deaths exclusively in jab recipients.
Very interestingly recently I was admitted to ICU in Milton Keynes hospital after developing Covid symptoms.
I took three lateral flow tests whilst there and was told at the time I was not positive only to be told later on the ward I was positive so clearly it was inconclusive so I will say I felt and feel terrible still.
But fundamentally for me things to change very much in the hospitals and one of the very first people to visit me bedside was a representative from Oxford University funded by the gates foundation begging me to trial new medicines (whilst being unable to look me in the eye) not even related to Covid – naturally I declined.
I was told I would die and these medicines would be my last chance, again I declined and stuck to my guns.
Trust me that’s not an easy thing to do laying there in a hospital ward on your own, unable to breathe easily and denied any family support or visits.
It is deliberate and it is to break you. There seems to be more emphasis on encouraging me to be a guinea pig then actually treating me and I looked across at other people in the ward with sadness Who were all vaccinated without exception in fact to my knowledge I was the only one in the ward unvaccinated – they will probably be all gone now… And I was reminded “how selfish I was” even in the ambulance on the way there I shit you not…. The Hospital environment has fundamentally changed beyond recognition for me and whilst there were shadows and echoes of what it once was it’s a very different place now and I suspect it is already being fully privatised we just haven’t been told.
The “food” was appalling and all tasted the same I’m not sure if this was due to Covid symptoms but there was like a horrible oil over everything puddings & dinners. It took at least 3 or 4 days to get the taste out of my body, it was disgusting. Moving forward, I suspect as people come down with Covid there will be greater and greater efforts made to target children especially in the new year with injections and I would urge you to take your children out of school rather than allow this to happen. When I attended a meeting in September I was told in no uncertain terms that up to 70% of these children would be sterilised as a side effect and there will be many that will die as a result of myocardia.
If given these injections many will die of myocardia if received and this I do no doubt will come to pass so please keep in mind what I have heard in this meeting and I have sat in front of Sir Graham Brady at Westminster.
I feel very fortunate to have escaped hospital (I never dreamt I would have lived to say that) with the help of family in friends.
I was initially sceptical about Covid but I can confirm it’s validity and it is very nasty.
But I can also tell you it is 100% man-made this is not a natural virus and this is an attack on all of us – it’s a bio weapon. My advice to you moving forward is network, prepare and under all circumstances try to avoid going into hospital because I suspect many of the poor souls I saw in there will never ever leave having become test tubes for the gates foundation.
The sinister whispering the secrecy and the guilty looks amongst certain members of staff spoke volumes to me It was honestly very chilling and traumatising just seeing how it has changed – especially when I asked to leave. The tactics used to try and force me to stay were sadistic to say the least and that is as much detail as I can go into except to say I feel very very lucky to have gotten out. Thank you for coming today I wished I could be with you but it has actually exhausted me even just dictating this message to you all.
I will recover and get stronger over the next few weeks and then resume my duty’s caring for others.
Please appreciate this time I have to focus on myself and my family and it had been a rollercoaster of pain at this time.
I just need time – please bear with me and leave me to heal and eventually I will be back

One thought on “Funeral Director John O’Looney: They tried to test experimental drugs on me on behalf of the Gates Foundation”