Yesterday, I expressed doubts about yesterday’s earthquakes in Victoria.

Information I have received since have not reduced my doubts in the least.

Yesterday, I felt the timestamp on the following article was odd. 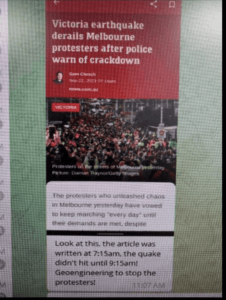 And then I received a soundfile from a rural Victorian (in the video above) who bore out my doubts.

And although there were headlines expending aftershots as of now (11.30 Melbourne time) there have been no quakes, M1.5 or greater reported)