Already days before the July 22 European “Doomsday” when the scheduled Russian 10-day maintenance of the crucial Nord Stream pipeline to Germany is slated to end – but which was thrown into deep doubt given Gazprom recently said it can no longer guarantee its “good functioning” due to crucial turbines being previously held up in Canada related to sanctions – the Russian energy giant has declared Force Majeure to one major European customer.

Simply put, Gazprom declared extraordinary and extreme circumstances to void itself from all contractual obligations to this customer, thus the gas will stop flowing indefinitely, as Reuters reports in a breaking development Monday, “Russian gas export monopoly Gazprom has declared force majeure on gas supplies to Europe to at least one major customer starting June 14, according to the letter seen by Reuters.” The letter is dated July 14. “It said the force majeure measure, a clause invoked when a business is hit by something beyond its control, was effective from deliveries starting from June 14,” writes Reuters. 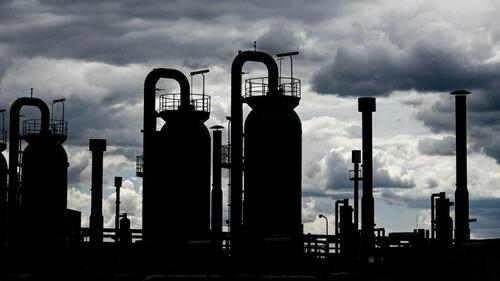 The letter invoked “extraordinary” circumstances outside the company’s control, Reuters continues, citing a source saying the customer in question is Germany via the Nord Stream 1 pipeline.

And Bloomberg is also confirming:

As we’ve been detailing, German authorities have of late taken unprecedented steps in anticipation of an enduring Russian gas halt, essentially dimming the lights across the country – which has included everything from limiting hot water, to shutting down swimming pools, to quite literally dimming city street lights as it entered “alarm” stage over dwindling supply.

And as demonstrated in the Monday morning oil price spike (below: WTI crude futures for September), the bid for oil will remain strong the longer the force majeure holds, given utility companies and the manufacturing sector are likely to seek transition to oil from gas…

It seems this letter declaring its legal release from supply obligations going back to June 14 is in preparation for definitive action on July 22, namely that the pipeline’s operations are likely to remain suspended past the scheduled reboot/supply back online designated date.

EU – Whilst you are distracted by hysterical news reports about climate, the real heat (or lack of) is in Europe.

Meaning … there won’t be any!

In an analysis from earlier this month (available to pro subscribers), UBS economists laid out a detailed vision of what they see happening if Russia halts gas deliveries to Europe: It would reduce corporate earnings by more than 15%. The market selloff would exceed 20% in the Stoxx 600 and the euro would drop to 90 cents. The rush for safe assets would drive benchmark German bund yields to 0%, they wrote.

“We stress that these projections should be seen as rough approximations and by no means as a worse-case scenario,” wrote Arend Kapteyn, chief economist at UBS.

“We could easily conceive economic disruptions that lead to more negative growth outcomes.”

To be sure, markets are already pricing in some of the damage beginning with the euro which starting this month traded at a fresh two-decade low and touched parity with the dollar, something it hasn’t done since 2002.

Meanwhile the Paris-based International Energy Agency (IEA) is still even amid this “red alert crisis” for Europe bizarrely focused on responding to the emergency in a way “consistent with the EU’s climate ambitions”… this as Germany and other European populations are about to clearly enter an extremely difficult winter, to put it mildly.

From a fresh IEA report: After many months of warning signs, Russia’s latest moves to squeeze natural gas flows are a red alert for the EU – a snippet of which is below…

The world is experiencing the first truly global energy crisis in history. And as the International Energy Agency has been warning for many months, the situation is especially perilous in Europe, which is at the epicentre of the energy market turmoil. I’m particularly concerned about the months ahead.

The gas crisis in Europe has been building for a while, and Russia’s role in it has been clear from the beginning. In September 2021 – five months before Russia’s invasion of Ukraine – the IEA pointed out that Russia was preventing a significant amount of gas from reaching Europe. We raised the alarm further in January, highlighting how Russia’s large and unjustified reductions in supplies to Europe were creating “artificial tightness in markets” and driving up prices at exactly the same time as tensions were rising over Ukraine.

After Russia invaded Ukraine on 24 February, nobody in Europe or elsewhere could be under any illusions about the risks around Russian energy supplies. Just a week after the invasion started, the IEA released our 10-Point Plan to Reduce the European Union’s Reliance on Russian Natural Gas, setting out the practical actions Europe could take. It stressed the need to maximise gas supplies from other sources; accelerate the deployment of solar and wind; make the most of existing low emissions energy sources, such as renewables and nuclear; ramp up energy efficiency measures in homes and businesses; and take steps to save energy by turning down the thermostat.

Zelensky is afraid of a coup: He fired the SBU Chief

A conflict between V. Zelensky and the military is ongoing in Ukraine, confirming the information that existed for days about a “very bad climate” due to the disintegration of the Ukrainian Army.

Zelensky seems to fear a coup from within because of this and has fired his “right-hand man and childhood friend”, the head of the SBU secret service.

At the same time, the Russians are pounding the whole country by intensifying the missile attacks. Artillery, missile forces, Air Force, Navy and strategic bombers are striking targets across Ukrainian territory.

Earlier, there were reports of an intensification of hostilities in Donbass, in particular in the Soledar, Seversk and Artemovsk region, as well as in Kharkiv, where Ukrainian positions were heavily attacked in the Barvenkovo ​​– Slavyansk direction.

In fact, Bakanov was suspended under a very harsh law, Article 47 of the Criminal Code. Today, in a speech to the Ukrainian people, Zelensky stated why he expelled them.

He said about it:

“651 criminal proceedings for high treason and collaborative activities of prosecutors, pre-investigation bodies and other law enforcement agencies have been recorded.

In 198 criminal proceedings, individuals have been named as suspects.

In particular, more than 60 employees of law enforcement agencies and the SBU remained in the occupied territories and are working against our state.

Such a series of crimes against the foundations of the national security of the state and the connections recorded between the employees of the law enforcement agencies of Ukraine and the special services of Russia pose very serious questions to the relevant leaders.

Each of these questions will get an answer, ” Zelensky said.

Ivan Bakanov, until now the head of Ukraine’s internal security service, is a childhood friend of Zelensky.

Prosecutor General Irina Venediktova had taken over the effort to prosecute Russian war crimes in Ukraine.