We’ve Geoengineered The World Into A Death Spiral: ‘All Data Indicates We’re Already Beginning To See The Effects Of The Accelerating Systems Collapse Much Sooner Than Predicted’ 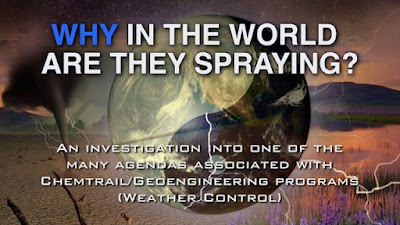 By Stefan Stanford – All News Pipeline

In what is being called ‘bad news on top of bad news,’ more and more dead whales keep washing up on the shores of New Jersey, with a 7th dead whale washing up on Friday the 13th after Jersey Shore residents had reported a ‘sustained, loud rumbling‘ Friday afternoon off of the coastline, and as we’ll explore within this story, in a case of what is being called ‘very odd bedfellows,’ left-wing environmental groups are joining up with Republican politicians in calling for a pause to the building of offshore wind farms that many among both groups believe are responsible.

And while Democrat New Jersey governor Phil Murphy told reporters over the weekend that he doesn’t believe the undersea preparation for those wind farms should stop in response to the spate of recent deaths, as Dane Wigington warned in this recent story over at his Geoengineering Watch website as also heard in the 1st video at the bottom of this story, those heartbreaking whale deaths are happening at the same time as the California “rainpocalypse,” Europe going through it’s warmest winter temperatures in recorded history while temperatures in locations in Siberia plummeted to 80 degrees below zero.

With Dane also warning us that ocean oxygen levels are dropping fast, fisheries are plummeting and animal populations are collapsing, he warns that if we stay on the current path we’re on, we’re headed towards ‘total collapse.‘ And while the radical left will scream out ‘global warming,’ as Dane has been warning us for years and years on his website, this is really about the ‘geoengineering of the weather.‘

And it sure looks like the state of California is under ‘weather warfare‘ right now with one atmospheric river after another rolling into the state since December 26th, and the state putting 25 million people on flood alert and no end in sight to the catastrophic rainfall levels that have left at least 19 dead and thousands without power and underwater, yet as Dane warns us, the ‘masses‘ are clueless as to what’s causing this and what’s ahead.

So while the construction of those offshore wind farms as being a culprit in these alarming whale deaths is being looked at by the left and by the right, and the people of the left and right working together towards accomplishing something is great to see, as long as ‘man keeps attempting to play God‘ with the weather via ‘strategic aerosol injections‘ and all of their other ‘weather modification techniques,’ things will continue to get worse before they get better.

(ANP FUNDRAISER: First of all, ANP wants to thank everybody who recently donated to ANP during our emergency fundraising drive. You absolutely amazing people got us out of a huge mess due to heavy censorship by ‘big tech’ upon ANP articles, so HUGE THANK YOU’S go out to everybody who recently donated as well as to everybody who has donated to ANP over the years. With donations and ad revenue all that keep ANP online, if you’re able, please consider donating to ANP to help keep us in this fight for America‘s future at this absolutely critical time in US history. During a time of systematic, ‘big tech’ censorship and widespread institutional corruption, truth-seeking media and alternative views are crucial, and EVERY little bit helps more than you could know!) 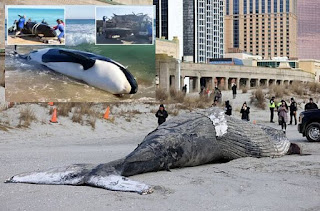 And as we hear in the 2nd video below from the state of Florida, a beached 21-foot killer whale was also found dead this week after washing up on a Florida beach, with the female Orca showing signs of illness. And while a communications specialist for NOAA Fisheries says they are waiting for lab work to come back with the official cause of death, as this Fox 35 Orlando story warned, this is a very rare occasion for Florida and the Southeast United States in general. From that story.

The Flagler County Sheriff’s Office posted heartbreaking video and photos of the orca after it was found beached on the shore south of Jungle Hut Park in Palm Coast.

“This is extremely rare,” said Blair Mase with the National Oceanic and Atmospheric Administration (NOAA). “We’ve never had a record of a stranded killer whale in Florida or the Southeast United States.”

According to SeaWorld, while killer whales can be found around the world, they are much more common in highly productive areas of cold-water upwelling including the Pacific Northwest, along northern Norway’s coast in the Atlantic, and the higher latitudes of the Southern Ocean. In addition to being found in colder water, killer whales also have been seen in warm water areas such as Florida.

Dr. Erin Fougeres, NOAA Stranding Program Administrator, spoke to FOX 35 and said there are several factors that can make orcas sick, including contaminants and prey shortages.

“But for this particular individual there’s also natural diseases and things like that, and that’s really what we’re trying to get out of the necropsy.”

So while the National Oceanic and Atmospheric Administration, NOAA, recently claimed that none of the dead whales found in New Jersey could be linked to the development of wind farms after questions were raised following the beaching Thursday of a 20- to 25-foot-long humpback whale which washed ashore just north of Atlantic City, the Marine Mammal Stranding Center said it and several other groups were formulating plans Friday for a post-mortem examination of the whale’s remains before the animal’s carcass is disposed of, most likely through burial on the beach. From this AP story.

“We should suspend all work related to offshore wind development until we can determine the cause of death of these whales, some of which are endangered,” said New Jersey state Sen. Vince Polistina, a Republican who represents the area.

“The work related to offshore wind projects is the primary difference in our waters, and it’s hard to believe that the death of (seven) whales on our beaches is just a coincidence.”

But as that story also reported, NJ governor Murphy doesn’t think pausing offshore wind prep is necessary. With Murphy quoting NOAA when given his reasons why, Murphy claimed.:

“This is tragic, obviously,” (but) “They have said it’s been happening at an increased rate since 2016, and that was long before there was any offshore wind activity,” the governor said.

Yet while they weren’t building those offshore wind farms back then, as Wigington has warned over and over again, all of this ‘geoengineering of the weather’ has been going on for years and years and years, and well before the development of these wind farms started, with Wigington even documenting on his website over 100 years worth of ‘weather modification patents,’ proving to us just how real the geoengineering of the weather is in 2023, no matter how much they try to call it a ‘conspiracy theory.’ 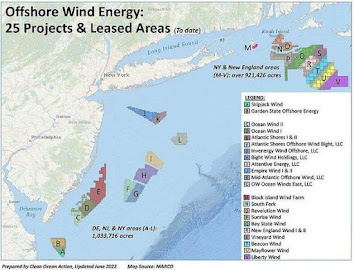 So while we at ANP are unable to confirm at this time that weather modification programs or wind farm development are responsible for these whale deaths, we see in this Zero Hedge story that for once, the left and the right are working together in an attempt to find out what’s behind the alarming surge.

In a case of odd bedfellows, environmental groups and Republican politicians are calling for a pause in offshore wind farm development following a string of whales washing up dead on New Jersey and New York beaches.

Seven whales have turned up dead in little over a month. The latest victim, a 20- to 25-foot juvenile Humpback whale, turned up in Brigantine, New Jersey on Thursday afternoon, close to a Coast Guard station.

“The wave of dead whales is the ocean sounding the alarm, and we must heed the warning,” said Cindy Zipf, executive director of Jersey-based Clean Ocean Action, after the sixth whale washed up in Atlantic City on Jan. 7 with signs of head trauma. “[The wind farm development] is too much, too fast. It’s outrageous and our ocean deserves better.”

On Friday, Congressman Jeff Van Drew (R-NJ) announced he would seek a federal investigation. “Ocean life is being put at risk as our governor and president force through their Green New Deal policies, without giving full consideration to their real-world impacts.

“The work related to offshore wind projects is the primary difference in our waters, and it’s hard to believe that the death of (seven) whales on our beaches is just a coincidence.”

For others officials, though, it’s damn the whales, full speed ahead. Democratic New Jersey governor Phil Murphy, on Friday said that, while “this is tragic, obviously,” suspicions that tie the dead whales to the wind farm development were “unfounded and premature.”

New Jersey has been on a quest to distinguish itself as the top offshore-wind state on the east coast. The Garden State has already approved three offshore wind farms and is soliciting more requests.

So with the ‘establishment left’ making a habit of ignoring ‘coincidences‘ in 2023, ignoring the principal of causation and how one event, process, state, or object contributes to the production of another event, process, state, or object where the cause is partly responsible for the effect, and the effect is partly dependent on the cause, with all of these alarming ‘sudden deaths‘ happening among the recently vaxxed another perfect example of that ‘denial of reality,’ as Dane Wigington warns us in this 1st video, according to a just published report, all data indicates the world is headed towards a massive critical systems collapse much sooner than had previously been predicted, a collapse which is now expected to take place between the years 2025 and 2030.

Warning us then that while that sounds bad, the reality we’ll face will likely be much worse and happen much sooner, Wigington warns us this is what we get for this past century of man attempting to play God with the weather, and the more of these deaths we see in the coming year, the further along we’ll be in that process though, like with all of these deaths following the rollout of the vaxxes, we can’t expect the Biden cabal and their friends up in New Jersey to see the noses upon their rotting faces.