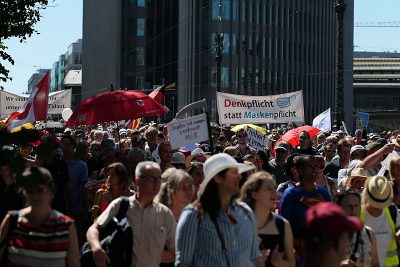 Unity and Justice and Freedom: “The Song of the Germans” No Longer Applies to the Common People 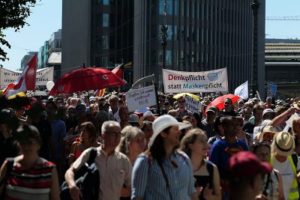 On 13 April 2021, the government of the Federal Republic of Germany amended or tightened the Infection Protection Act (§ 28b IfSG). It is the draft of a Fourth Law for the Protection of the Population in the Event of an Epidemic Situation of National Significance.

In reality, this so-called “Federal Emergency Brake” slows down the legally guaranteed basic rights of citizens.

The Federal Ministry of the Interior (BMI) confirms: “Emergency Brakes” Act abrogates fundamental right of inviolability of home and body (1).

The renowned legal scholar Volker Boehme-Neßler adds: The planned coercive measures such as de curfews are “unconstitutional, dictatorial and against human nature” (2).

The German Bundestag will decide next week on this legislative path to open dictatorship.

The German national anthem, as a state symbol, was protected from denigration in a special way. But for months it has been dragged deeper and deeper into the mud by a corrupt clique of politicians on behalf of a billionaire and power “elite” and is now only valid for them, no longer for the common people.

A minority of people, who exploit, enslave, sow discord, injustice and lack of freedom, has taken over the scepter worldwide. And whoever believes that he can speak and negotiate with this other side, these ruling beneficiaries, who have the whole thing in their hands, is mistaken.

No! They are so sick that no negotiation is possible with them. It was still like that in the story: When the working people went on strike for their right to freedom, justice, security, peace and a life worthy of a human being and took to the streets for their children, the governments first used the police and then the military – and finally let them shoot.

The text of the German national anthem is the third verse of the poem “Das Lied der Deutschen” and was written by August Heinrich Hoffmann von Fallersleben in 1841 on Helgoland and set to music by Joseph Haydn:

“Unity and Justice and Freedom / for the German Fatherland!

Let us all strive for this / Brotherly with Heart and Hand!

Unity and Justice and Freedom / are the Promise of Happiness:

What has remained of all this in Germany?

The passing of the new so-called infection protection law last week is only one example of many for the omnipotence fantasies of politicians and the increasing compulsion, the permanent rule changes and threats, the sickening isolation detention of adults and their children, the restricted freedom of movement, the psychological programming and finally the systematic destruction of the human psyche (David Icke). The formerly “silent” dictatorship of democracy was secretly transformed into an open dictatorship.

Mahatma Gandhi, the Indian lawyer, moral teacher and pacifist, showed the world in the last century what strength a person with an unbending will can develop and what he can achieve through it. His motto was:

“Strength does not come from physical abilities. It comes from an unbending will.”

The Indian independence movement, of which he was the intellectual and political leader, took up his idea of non-violent action and “Civil Disobedience” and in August 1947 reached the end of British colonial rule over India. Why should we not develop this unbending will?

“When I think of Germany at night, / Then I am deprived of sleep,

I can no longer close my eyes, / And my hot tears flow.”

Note to readers: please click the share buttons above or below. Forward this article to your email lists. Crosspost on your blog site, internet forums. etc.

Dr. Rudolf Hänsel is a certified psychologist and educationalist