Ghislaine Maxwell, a former confidant of sex trafficker and convicted pedophile Jeffrey Epstein, has been found guilty on five of six counts linked to helping the late financier groom and recruit teenage girls for abuse.

The British socialite was convicted on Wednesday, including on the most serious charge of trafficking a minor for sex, following six days of deliberation by the jury. She has yet to be sentenced, but initially faced up to 80 years in prison over the six counts.

Though Maxwell was found not guilty on a charge of enticing an individual under the age of 17, identified only as Jane, to travel with the intent to engage in sexual activity, she was convicted on a total of five sex crimes, each involving trafficking of underage girls or conspiring to do so, according to a verdict sheet obtained by journalist Adam Klasfeld.

After the guilty verdict was read, Maxwell reportedly little emotion, seen pulling down her face mask and pouring a glass of water, according to Reuters.

The jury’s deliberations kicked off on December 20 and were briefly paused for Christmas. During that time, concerns were raised that the trial could be disrupted due to the rapid spread of Covid-19 through New York City. Speaking to reporters on Tuesday, Judge Alison Nathan warned that an “astronomical spike” in infections could even result in a mistrial should a large number of jurors fall ill.

At the same time, Nathan insisted that he was not trying to pressure the jury to reach the verdict faster, saying that they “should take all the time” they might need.

Both Epstein’s and Maxwell’s trials have included explosive allegations that minors groomed by the couple had numerous interactions with prominent public figures, including former US presidents and British royalty.One accuser, identified only as “Jane” to protect her identity during the trial, testified that Epstein introduced her to Donald Trump when she was just 14, and that she shared a flight with UK’s Prince Andrew on the financier’s private jet. Jane did not allege any misconduct by Trump or the Duke of York, however, but said the two were friends with Epstein during the time he abused her. Other known associates of Epstein include ex-US President Bill Clinton, billionaire Microsoft founder Bill Gates, Prince Andrew’s ex-wife Sarah Ferguson, as well as Charles Althorp, the brother of the UK’s late Princess Diana.

During closing arguments last week, the prosecution said that Maxwell was Epstein’s “partner in crime” and a “sophisticated predator” who helped the notorious financier to recruit underage girls for sex. The prosecutors argued that Maxwell “made her own choices” and “knew exactly what she was doing.”

Epstein committed suicide in his New York City prison cell as he awaited trial for his own sex trafficking charges in 2019.

Maxwell’s defense, however, insisted she was not involved in the abuse and was being scapegoated for the wealthy financier’s actions, for which he was never tried or held accountable.

“Epstein’s death left a gaping hole in the pursuit of justice for many of these women. [Maxwell is] filling that hole, and filling that empty chair,” defense attorney Bobbi Sternheim said in court.

‘Maxwell did not act alone. Others must be held accountable’: Prince Andrew accuser Virginia Giuffre leads reaction to Ghislaine sex trafficking verdict and says it ‘not the end but another step for justice’

Virginia Giuffre, the most vocal accuser of Jeffrey Epstein and Ghislaine Maxwell, said that she had finally been granted the justice her ‘soul yearned for’ after Maxwell was found guilty of sex trafficking and other charges on Wednesday.

Giuffre, who has also accused Prince Andrew of sexual assault, tweeted on Wednesday after a jury of six men and six women found the British socialite guilty.

She wrote: ‘My soul yearned for justice for years and today the jury gave me just that. I will remember this day always.

‘Having lived with the horrors of Maxwell’s abuse, my heart goes out to the many other girls and young women who suffered at her hands and whose lives she destroyed,’ Giuffre wrote on Twitter.

She added: ‘I hope that today is not the end but rather another step in justice being served. Maxwell did not act alone. Others must be held accountable. I have faith that they will be.’

Giuffre was not included in the trial against Maxwell but has become one of the most well-known Epstein accusers. She claimed Epstein and Maxwell trafficked her to powerful men, including to Prince Andrew at Maxwell’s home in Belgravia. 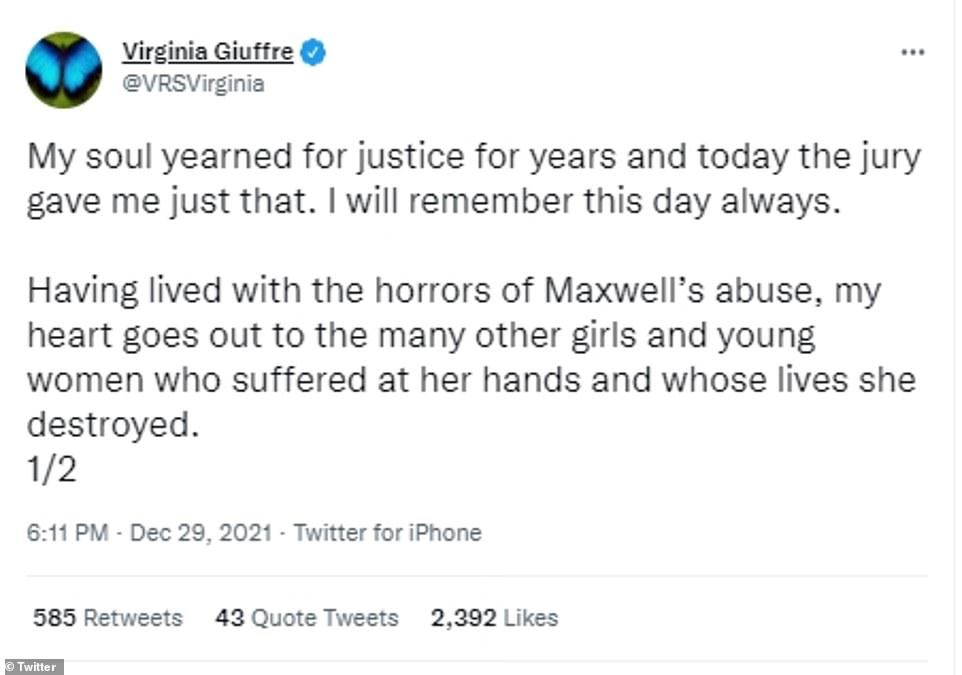 Virginia Giuffre, perhaps the most vocal accuser of Jeffrey Epstein and Ghislaine Maxwell, reacted on social media after Maxwell was found guilty of sex trafficking and other charges on Wednesday

She added: ‘I hope that today is not the end but rather another step in justice being served. Maxwell did not act alone. Others must be held accountable. I have faith that they will be’