This is how many vessels are waiting to enter the port of Shanghai. Raising interest rates will not solve this problem (just saying) pic.twitter.com/HfOx6VlyV8 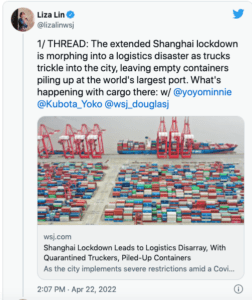 There’s a video on every single WeChat Moments right now, being censored as quickly as someone can repost. Scrolling down every feed is just this video being reuploaded and then censored. It depicts desperate people calling into CDC asking for help during the Shanghai outbreak. pic.twitter.com/Y3W05VIaTn

1/ THREAD: The extended Shanghai lockdown is morphing into a logistics disaster as trucks trickle into the city, leaving empty containers piling up at the world’s largest port. What’s happening with cargo there: w/ @yoyominnie @Kubota_Yoko @wsj_douglasj https://t.co/qn0UCWSdSa

China About to Wreck Your Summer

The Chinese Communist Party is about to wreck your summer. https://t.co/AaKfaS710J

“The coming volume drop in ocean container volumes (TEUs) leaving China for US ports is staggering. Our Ocean TEU Volume Index in SONAR now has a 14-day forward look at volumes, and it looks ugly. By early May 2022, we could see the lowest levels we’ve seen since May of 2020.“

There will be a surge of containers from China when it resumes its economy, but no one knows when this will happen, how long it will take, and how backed up their domestic supply chains are. For now, we know the freight market is slowing and 🇨🇳 is only making things worse. 1/

What About Kitchen Appliances?

A large private consumer kitchenware manufacturer told me that they have seen a large contraction in demand over the past 8 weeks.

“A large private consumer kitchenware manufacturer told me that they have seen a large contraction in demand over the past 8 weeks.”

Question of the Day

Its hard to say – it could allow inventories to burn off, but the biggest question is what those inventories consist of and how long will Chinese manufacturing be shut down. Too many questions at this point.

Is the slowdown in Shanghai at all welcome? That’s the big question.

To the extent US merchants have ordered too much inventory in the face of falling demand, perhaps.

But Fuller notes there are just too many questions. For starters, what is China doing? Every other country on the planet is loosening restrictions.

What About the UK?

Meanwhile, Back in the States

These Bank of America Weekly Shipper Survey charts are nasty for carriers but suggest #deflation is on the way. pic.twitter.com/WfWyXWvlwS

I believe you get the idea, shipping is a mess and there is a slowdown as well. A US housing bust is underway.

But here’s an important point about deflation and recession: When Fuller makes a recession or deflation call, it is specifically about the trucking industry, not an overall assessment.

He made that point clear in my video interview of Fuller that I posted on April 14.

See MishTalk TV with the CEO of FreightWaves: Trucking Recession or the Real Deal? for the video and discussion points.

Whereas he comments on the trucking industry, I am willing to go further. A very hard landing is on the way.

Thanks again to Craig Fuller for the interview and all of his Tweets.