Several large-scale cryosphere elements such as the Arctic summer sea ice, the mountain glaciers, the Greenland and West Antarctic Ice Sheet have changed substantially during the last century due to anthropogenic global warming. However, the impacts of their possible future disintegration on global mean temperature (GMT) and climate feedbacks have not yet been comprehensively evaluated. Here, we quantify this response using an Earth system model of intermediate complexity. Overall, we find a median additional global warming of 0.43 °C (interquartile range: 0.39−0.46 °C) at a CO2 concentration of 400 ppm. Most of this response (55%) is caused by albedo changes, but lapse rate together with water vapour (30%) and cloud feedbacks (15%) also contribute significantly. While a decay of the ice sheets would occur on centennial to millennial time scales, the Arctic might become ice-free during summer within the 21st century. Our findings imply an additional increase of the GMT on intermediate to long time scales. 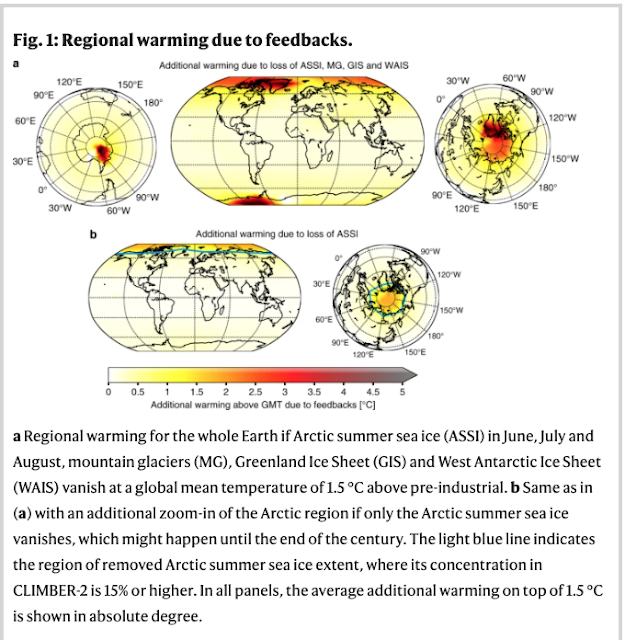 Extensive changes have been observed in large-scale cryosphere elements during the last decades such as the Arctic summer sea ice, mountain glaciers, the Greenland and West Antarctic Ice Sheet1,2,3,4,5.

From the late 1970s to the mid-2000s, the Arctic summer sea ice area has declined by more than 10% per decade, as satellite measurements reveal1. If this trend continues, the Arctic could become ice-free in summer for the first time within the 21st century. Projections with CMIP-56 (Coupled Model Intercomparison Project Phase 5) models show that this could be the case as early as 2030 to 2050 for higher emission scenarios such as RCP8.5 (Representative Concentration Pathway)7. Some GCMs (global circulation models) show an ice-free Arctic for the first time within this century also for the moderate emission scenarios at a warming of 1.7 °C above pre-industrial8,9. Furthermore, observations reveal that the Arctic summer sea ice declines faster than expected in experiments from GCMs1.

At the same time, mountain-glaciers world-wide have retreated, with an average weight equivalent ice loss of approximately 250 ± 30 Gt per year between 1901 and 20092,10. This translates, in the same time span, into a loss of 21% of the glaciated volume of mountain glaciers worldwide, excluding (Sub-)Antarctic peripheral glaciers, as found in model simulations11. During this time, it is estimated that approximately 600 glaciers have disappeared and many more are likely to follow in the future (IPCC-AR5, Chapter 46). 36  ±  8% of today’s glacier mass is already committed to be lost in response to past greenhouse gas emissions12 and it has been found that many mountain glaciers are currently in disequilibrium and will be subject to further ice loss13.

Moreover, both the West Antarctic and the Greenland Ice Sheet have lost mass at an accelerating pace in the past decades3,4,5. With progressing global warming, ice loss from the polar ice sheets and subsequent sea-level rise is expected to further increase14,15. Beyond a critical temperature threshold, large parts of the Greenland Ice Sheet might melt, accelerated by positive feedbacks such as the ice-albedo and melt-elevation feedbacks16,17. From model simulations, this threshold temperature is suggested to range between 0.8 and 3.2 °C above pre-industrial levels18.

Parts of the West Antarctic Ice Sheet might already have crossed a point of instability: the grounding lines of several glaciers in the Amundsen basin are rapidly retreating and have likely become unstable, causing sustained ice discharge from the entire basin which could lead to more than 1 m of global sea-level rise19. Similar dynamics might be induced in other parts of the Antarctic Ice Sheet and could eventually lead to its complete disintegration under unmitigated climate change20.

Anthropogenic climate change has already caused a rise in global mean temperature (GMT) by 0.9 °C comparing 1850–1900 to 2006–201521, with observable impacts on the cryosphere elements mentioned above6. It has also been suggested that these regions are likely to change dramatically with ongoing climate warming and some of these changes are suspected to possess some degree of irreversibility22,23.

Following these recent developments of the cryosphere components, it seems possible that they might be lost at lower temperatures than commonly thought, potentially as low as 1.5 °C above pre-industrial levels23. The disintegration of these elements is associated with feedbacks that impact back on GMT, for instance via a change in albedo, clouds or lapse rate, among others, which has not been quantified comprehensively so far. Therefore, we assess the additional global warming caused by disintegration of the Greenland Ice Sheet, the West Antarctic Ice Sheet, the mountain glaciers and the Arctic summer sea ice. Although the Arctic summer sea ice is implemented in more complex Earth system models and its loss part of their simulation results (e.g. in CMIP-5), it is one of the fastest changing cryosphere elements whose additional contribution to global warming is important to be considered. Therefore, we compute and separate its contribution to GMT increase. On the other side, the temperature feedbacks of ice sheets like Greenland, West Antarctica and mountain glaciers are not yet fully integrated in assessments such as CMIP-5.

We base our simulations on the Earth system model of intermediate complexity, CLIMBER-224,25 because it is computationally efficient and allows a systematic analysis of the decay of the cryosphere components. CLIMBER-2 includes atmosphere, ocean, sea ice, vegetation and land-ice model components and has been applied extensively to understand past and future climate changes26,27.

In large ensembles of equilibrium model simulations, constrained by fast climate feedbacks strength from global circulation models28 (see “Methods”), we compare the long-term GMT change in idealised scenarios, where the cryosphere elements are removed, to scenarios where they remain intact. The uncertainty in the additional warming in our simulations is constrained by the uncertainty of the feedback strength in the GCM simulations which we used to mimic the more complex behaviour of GCMs28 (Supplementary Fig. 1). To change the feedback strengths, we alter CLIMBER-2 model parameters that act on the strength of the feedbacks themselves, particularly in the structure of the troposphere and the clouds (atmospheric changes) as well as in the snow albedo (see Supplementary Table 1). With reasonably altered parameters in CLIMBER-2, we arrive at an equilibrium climate sensitivity of 2.0–3.75 °C for our ensemble leading to smaller temperature responses than the full range from CMIP-5 (2.0–4.7 °C) or CMIP-6 (1.8–5.6 °C) would29. Details on the calibration process are given in the methods section: uncertainty estimates.

In our experiments the state of the Greenland Ice Sheet, the West Antarctic Ice Sheet and mountain glaciers is simply prescribed in the model and affects both, ice cover and topography. In our simulations for the Arctic summer sea ice, the albedo during the summer months (June, July, August) is lowered to average values for open ocean waters instantaneously similar to Blackport and Kushner30, while keeping the computation of ice-covered areas dynamic, such that the experiment does not violate energy and water conservation.

In this study, we find that global warming is amplified by the decay of the Earth’s cryosphere as expected from theory and quantify the contribution of each of the four cryosphere components. We further separate the GMT response into contributions from albedo, lapse rate, water vapour and clouds in terms of perturbation of the net radiation at the top of the atmosphere31. Here, we focus on the purely radiative effects and neglect freshwater contributions to feedbacks and warming. Thus, our estimates are long-term equilibrium responses when the large ice masses are disintegrated. However, transient warming responses would be reduced due to freshwater input from the West Antarctic and Greenland Ice Sheet on centennial time-scales32,33,34,35