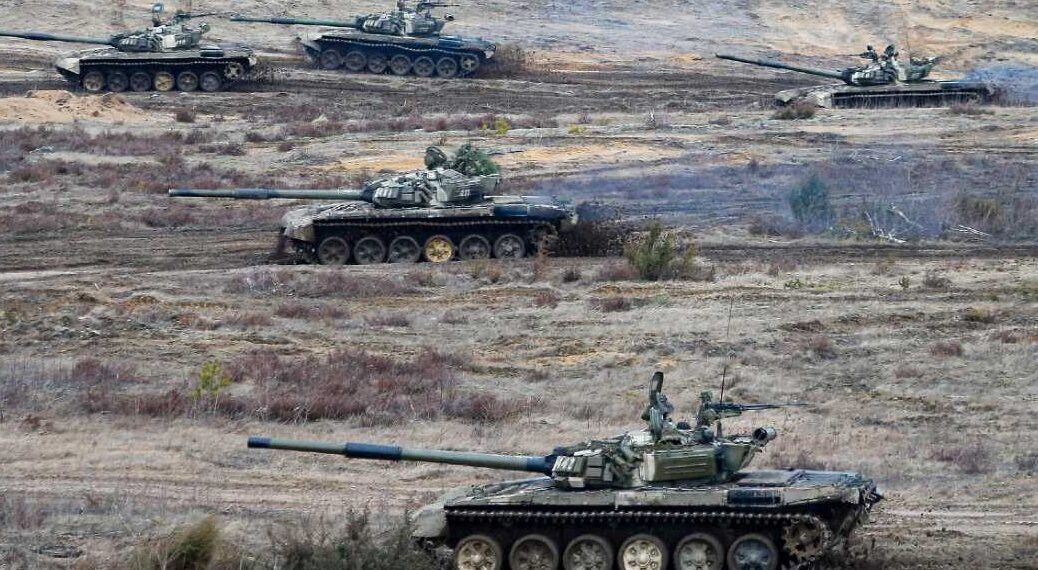 Today, Gonzalo Lira has put out a very informative video

Here are some of the signs:

Russian President Vladimir Putin told reporters at a press conference after his visit to Kazakhstan that the conscription process would be completed within two weeks.

To date, he said,222,000 people out of the projected 300,000 have already been mobilized and he also called for the quality of mobilization to be improved.

In addition, he demanded that all conscripts be trained.

A joint force with Russia announced by Lukashenko

The president of Belarus, A. Lukashenko, announced a while ago that the joint force with Russia will consist of 70,000 Belarusian soldiers. Belarus’ Army is 75,000.

The first 9,000 Russian reservists arrived in the Gomel area to join the force of 70,000 Belarusians was announced by A. Lukashenko.

The Russian air force began landing at military airfields in Belarus. For the first time, six MIG-31s ​​that can carry the supersonic conventional or nuclear Kinzhal missile have landed.

The pilots circled for 20-30 minutes before landing at the airport.

By order of General Surovikin, Soviet MiG-29 fighters were returned to active service from long-term storage. The fighters were deployed to air bases next to the border with Ukraine in areas such as Sumy and Kiev.

According to information, the Russian MiG-29 fighters were transferred from the Millerovo and Kursk air bases.

An exit ban was imposed on Belarusian military personnel

An exit ban was imposed on Belarusian military personnel unless they are going to go to Russia.

Reserve Belarusian officers began receiving orders to return to duty. This is done at the recruiting office, where they were called to “clarify information.”

At the same time, ongoing Belarusian military exercises were extended until at least October 23 while  “bans and restrictions” were introduced on visits to forests in 12 southern regions of Belarus.

Russian president Vladimir Putin has increased the number of his strategic nuclear bombers stationed at an airbase near the Finnish and Norwegian borders, satellite images show.

The move comes amid high tension over whether Putin plans to launch an atomic attack in Europe and his on-going invasion of Ukraine, which has suffered a string of embarrassing setbacks in recent months.

Russia has gradually increased the number of strategic bombers at Olenya air base – from none on August 12, to four supersonic Tu-160s on August 21, to 11 now.

The Armageddon planes are usually stationed at Engels Air Base, 450 miles south-east of Moscow.

China and five other nations warn their nationals to LEAVE Ukraine

For the very first time since Russia began its “Special Military Operation” in Ukraine on February 24, the China Foreign Ministry has issued an URGENT Bulletin to all Chinese anywhere in Ukraine, to EVACUATE IMMEDIATELY.  *** UPDATE 11:13 AM EDT SUNDAY – SEE BOTTOM

This action by China is no doubt based upon information they derived from Russia thanks to the close relationship between those two countries.   It also bodes ominously for Ukraine. 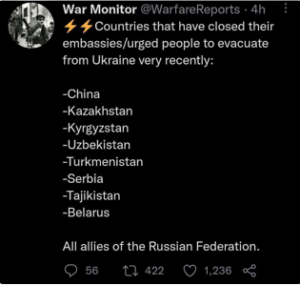 Kazakhstan announced it is closing its Ukrainian Embassy immediately and all of its citizens should leave Ukraine at once.  Kyrgyzstan, Uzbekistan, Turkmenistan, and Serbia have told citizens to leave Ukraine as well

Hal Turner is reporting the content of a two sentence memo from General Sergei Surovikin to his Commander-in-Chief, Vladimir Putin, concerning his personal plan for action inside Ukraine:

“I am not willing to sacrifice more Russian soldiers in a guerilla war against fanatical hordes armed by NATO.

We have enough power and technology to bring Ukraine to a complete surrender, and we will.” – Army general Sergei Vladimirovich Surovikin

From a few days ago

SpaceX Tells U.S. Gov’t it can no longer fund StarLink in Ukraine

SpaceX corporation has informed the United States government that the company can no longer fund the StarLink services provided to Ukraine.  Without Starlink, the Ukrainian army will have almost no way to reliably communicate with what’s left of its battlefield troops, and would almost immediately collapse.

This comes days after Ukrainian Ambassador Melnyk Andrij told Musk to “fuck off.”

To many observers, this is a two-fold matter:

1) Ukraine bashed the heck out of StarLink founder Elon Musk for daring to suggest a negotiated peace with Russia;  so it is likely Musk has his nose out of joint over the insults, AND;

2) It likely costs almost nothing to fund the operation of Ukraine’s Starlink services since all the satellites were already up and operating, so this is seen by many as a naked money grab; to get the US gov’t to fork over more cash under the guise of “aid to Ukraine.”

Either way, it seems to many that Musk wins.  He either gets to shut off the people who took his help for granted, then bashed him publicly for suggesting peace, OR, he gets a ton of cash from the US government to continue providing service to Ukraine.

Here are some misellaneous reports