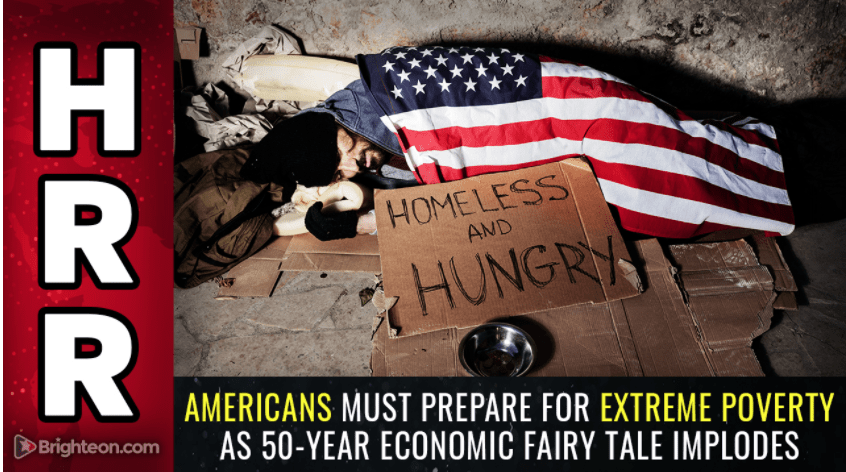 This message from Gonzalo Lira hits the nail on the head and refers back to things I have been talking about for ten years…except now they are ACTUAL. and not some time in the future

(Natural News) Do not confuse the headline of this analysis with any conclusions of who we’re rooting for. We are rooting for America and the American people, yet we simultaneously realize that the current occupying US government is an illegitimate, treasonous crime cartel that rigged the 2020 election, built the covid bioweapon and is trying to mass exterminate the American people with mRNA “vaccine” injections. They do not represent the true “America.”

We root for all humanity and universal liberty, truth, health, abundance and peace. These are universal concepts that nearly all Democrats, Leftists, journalists and bureaucrats have utterly abandoned. And the crime cartel in the D.C. swamp at the moment is actively trying to exterminate millions of Americans with engineered bioweapons and DNA-altering gene therapy injections.

Thus, when I say, “America is self-destructing,” it is with horror that such conclusions must be shared with you. The “extreme poverty” coming for America is not an outcome any of us want anyone to experience, but it is the inevitable outcome nonetheless.

If you and I are flying on a commercial airline at 30,000 feet, and I look out the window to see the entire wing burst into flame, I would scream out, “This airplane is going down! Brace for impact!” It does not mean I am rooting for us all to die in a fiery demise of twisted steel and ignited jet fuel. The analysis is simply the truth, regardless of how unpopular it may be to those who are still living in denial.

And yes, most Americans are living in denial. They are oblivious to what has already been unleashed and the ramifications that are headed their way.

The controlled demolition of an entire nation and its currency

The America we once knew is being systematically (and rapidly) taken down via controlled demolition (like Building 7). The dollar is headed to zero. The petrodollar system is collapsing and the reserve currency status of the US dollar will soon be abandoned.

Seven-eighths of the world’s population belong to countries which have not sanctioned Russia. Only about one-eighth of the world has sanctioned Russia (the USA, UK, Western Europe, etc.), whereas the two largest nations in the world (India and China) are happy to take up trade with Russia and purchase the nation’s abundant mineral and energy resources. Turkey is also happy to trade with Russia, as are most Middle Eastern, Asian and African nations.

Far from being an effective weapon against Putin, the West’s economic sanctions against Russia are a form of self-induced economic suicide. It’s not just that the wing of the airplane is on fire, it’s that Joe Biden is kneeling over the edge of that wing and sawing it off. The decisions by Biden (Obama) and the other puppet masters controlling the illegitimate enemy occupying force in D.C. are deliberately working to obliterate the United States of America and erase it from history. They are doing this because they are controlled by China and the WEF globalists. America stands as the last defense against a totalitarian global regime. So they’ve decided to take down America by whatever means necessary.

First, they tried releasing the covid bioweapon, followed by crushing economic sanctions against the American people. Both of these actions were clearly acts of war, which means it is Fauci, Collins and other US “leaders” who are guilty of war crimes, by the way. Because of the resilience of the American people, these tactics failed to bring down the country. So they unleashed deadly depopulation “vaccines” to cause millions of deaths. So far, 1.1 million excess deaths have already taken place in America since the vaccines were introduced, just as we predicted six months ago. Millions of Americans will die from vaccines over the next decade as the vaccine-induced cancers, heart attacks, autoimmune disorders and strokes take their toll.

But even this isn’t accomplishing their genocidal death goals quickly enough — and the people caught on to the covid scam — so now the tyrants are trying to push America into a global war with Russia. According to recent polls, one-third of the American people — mostly the oblivious, brainwashed lunatics who also wore masks for two years — are thrilled about the idea of nuclear war with Russia. They can’t wait to enjoy the radioactive fallout, it seems, and most of these oblivious sheeple live in Democrat-controlled cities which will be among the first targets in any nuclear exchange. This indicates they are utterly detached from reality and are living in bizarre bubbles of disinformation and lies perpetrated by the New York Times, CNN, MSNBC, USA Today, etc.

Suicidal U.S. political leaders are actively trying to escalate the Ukraine conflict to a nuclear exchange with Russia

It is now rather obvious that the US deep state is going to fake a chemical attack against Ukrainian civilians and blame it on Russia. This is probably just days away. Once accomplished, the US population will be traumatized with media-broadcast images of children with their skin melting off. The emotional appeal will be used to justify the rapid escalation of war with Russia, including increased calls for “nuking” Russia and sending troops into Ukraine. (Democrats always argue with emotions rather than facts, which is why they routinely need to murder children and parade them for CNN’s cameras as they run their false flag operations.)

This is exactly what the Obiden regime wants: A Russian launch of nuclear weapons against the United States. Once key military and strategic targets are taken out by Russia, China will be given the green light to invade the USA using pre-positioned troops that are already waiting for orders in Mexico and Canada.

With the Pentagon now run by treasonous, virtue-signaling libtards who have near-zero combat effectiveness, the only thing that’s going to repel that attack is the 500+ million firearms that exist in the United States, which is why Obama and Biden worked so hard to run false flag “gun violence” operations (Operation Fast & Furious, for example) in order to try to nullify the Second Amendment. That didn’t work, but they have another plan.

What they’re about to pull now is a declaration of war with Russia, followed by the suspension of the US Constitution and the declaration of what is essentially military martial law in America. This will be quickly followed by an attempted nationwide gun confiscation effort which will also fail. But it will set off a civil war in America, which is also what China and the globalists want. This will provide the justification for UN “humanitarian” troops to enter the USA, where they will predictably start kidnapping women and children to feed their global human trafficking operations (a UN specialty).

This is China’s ultimate plan for North America: The complete genocidal decimation of the North American people and the taking over of the continent for China’s expanding global empire.

If that invasion plan by China is delayed by several years — which is certainly possible — the United States of America is going to suffer extreme poverty starting very soon, simply due to the economic sabotage that has already been implemented by Biden. These sabotage decisions include:

Because of these truly insane decisions by Biden / Obama — which are of course designed to destroy America — the American people are about to be hit by a combination of price inflation and asset devaluation that they have never experienced and probably cannot even imagine. The Great Depression is a walk in the park compared to what’s coming. Covid supply chain shortages were just a blip compared to the total collapse of logistics, transportation and financial transactions that we’re about to witness.

Gonzalo Lira, who still has a channel on YouTube (but will likely be deplatformed soon, so we welcome him on Brighteon.com) gets it. Speaking with remarkable clarity and intelligence while reporting from Kharkov in Ukraine, Gonzalo reveals why Americans are about to be “poor” at a level they never imagined.

(We have reposted his video on Brighteon in good faith, giving him credit, hoping to protect this important message before YouTube deletes it. We request Gonzalo Lira to reach out to us so we can mirror all his videos with his permission and help support his channel on Brighteon.) Gonzalo has a Patreon page if you wish to support his work there.

Gonzalo Lira – America, you’re about to be POOR

Gonzalo Lira was so effective in his explanation of the coming generation of extreme poverty for America that I decided to borrow his title and expand on the topic in a 41-minute podcast which also serves as the last third of today’s Situation Update podcast. Here’s the standalone section about America’s fairy tale economic system coming to an end:

I’ve also posted a length Situation Update podcast which discusses all this in more detail. This adds another hour of analysis to the situation, and you can hear it here. It is very likely that I will be posting more podcasts this weekend, too.

2 thoughts on “Gonzalo Lira – America, you’re about to be POOR”