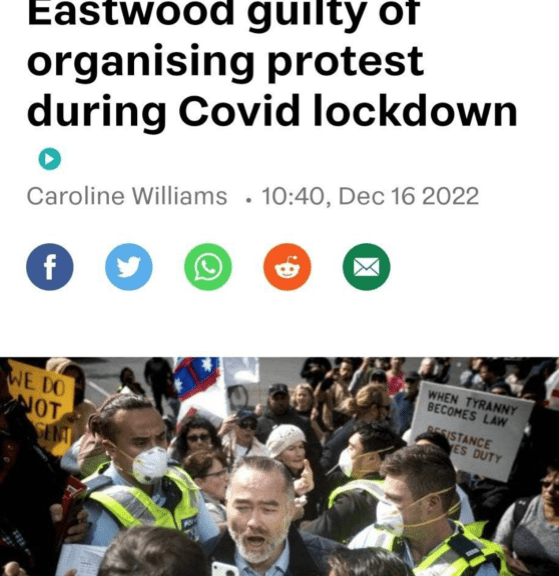 A guilty verdict has been handed down by the Auckland District Court for basically flouting ‘Covid-19’ level 4 restrictions and knowingly organizing a protest.

Despite there being zero evidence of any ‘pandemic’ or risk of any ‘virus’ to the population in possession of government, and therefore no logical reason for lockdowns to begin with, it was a guilty verdict regardless.

As the District Court deals in ‘process and procedure’ and not an examination of facts and evidence in relation to whether or not the lockdowns were justified, it was always a foregone conclusion.

For the record, CSM believes neither Billy nor Vinny should ever have been charged. We may be at odds with their views & positions on a number of topics, but this is certainly yet another miscarriage of justice, proving once again that the theater and agenda continue unabated.

Conspiracy theorists Billy Te Kahika Jr and Vinny Eastwood have been found guilty of organising a protest during Covid-19 alert level 4 in 2021.

Te Kahika and Eastwood were jointly charged with intentionally failing to comply with the Covid-19 Public Health Response Act by organising and attending the protest.

It took place outside the TVNZ building in central Auckland on the first day of a level 4 lockdown on August 18, 2021.

The pair were arrested at the protest and denied the charges at a judge-alone trial before Judge Peter Winter at the Auckland District Court in August 2022.

On Friday, Judge Winter found the pair guilty of both charges.

The verdict was met with scoffs from supporters in the gallery.

“You should be ashamed of yourself,” a man called out as he left the courtroom.

At trial, Te Kahika said he told police about his intention to organise a protest for 200 to 300 people.

He said he wanted police to be present to ensure the safety of protesters, the public and to prevent disorderly behaviour and violence.

In his decision, Judge Winter disagreed that the pair took measures to ensure the protest took place safely, with social distancing and mask wearing to prevent the spread of Covid.

“In fact, it would seem, that part of their protest action was to deliberately shun that form of protection as an act of defiance and protest.”

A senior police officer, whose name is suppressed, told the court trial Te Kahika was advised against proceeding with the protest, to which Te Kahika said he had a right to protest under the Bill of Rights Act.

Te Kahika claimed he was assured by the senior police officer that they took a “graduated approach to arrest”. As long as he worked with police and shut down the protest if it got too big, “things would be OK”.

Judge Winter said the defendants were both aware that they would be intentionally failing to comply with the Covid-19 lockdown order.

“That was their purpose in organising the protest. They had by their own admission intended to breach the Order and did so, even after they had been warned against that course of action.”

The legislation was there “for the protection of all New Zealanders” at a time when the re-emergence of the virus posed a “significant threat” to Kiwis.

Te Kahika earlier said he believed he was allowed to protest during lockdown conditions, given thousands attended Black Lives Matter protests across New Zealand in June 2020.

The country was under Covid-19 alert level 2 restrictions at the time, meaning gatherings of more than 100 people were not allowed. The organisers of the protests were not charged.

Judge Winter found this to be irrelevant.

“What may or many not have happened in respect of that other protest, was not the subject or direct evidence in this trial.”

Eastwood said he wanted to support Te Kahika in protesting “government overreach and misuse of power” and target the media, which he claimed had become a “government mouthpiece”.

Judge Winter also found Eastwood was dedicated to protesting, even if it was illegal, because he considered the lockdown to be “yet another incident of government overreach and misuse of power”.

Eastwood’s involvement in organising the protest was further proven when he took over a microphone following Te Kahika’s arrest.

The pair were arrested because they ignored attending police officers’ directions to stop inciting others to protest.

“Those arrests seemed to then have the desired effect of bringing the protest to an end,” Judge Winter said.

The pair will be sentenced in March.