China is extremely displeased with the potential trip by USA Speaker of the House Nancy Pelosi, to Taiwan, and they are openly warning of military action if the Speaker dares to try landing in Taiwan without approval from, and transiting through, Beijing.

Pelosi is reported to have begun her Asia trip yesterday, with stops in various countries.   One potential stop may be into Taiwan.

In the past, if any high ranking political official from any country, wanted to go to Taiwan, that official asks for permission from Beijing, then travel TO Beijing, and later heads to Taiwan.   This is the way it has always been given that the world has a “one China” policy and that Taiwan is part of China.

Last year, however, U.S. officials began flying directly into Taiwan.   To China, this was like getting a finger stuck in their eye.  It was insulting and demeaning that the island was being treated as if it were its own country, which it is not.

So when it became public knowledge that Speaker Pelosi was planning an Asia trip, with a stop in Taiwan, China decided they’d had enough.

It was made known in China official state media that Beijing will not tolerate direct flights by foreign officials into Taiwan.  The U.S. basically ignored those challenges.

China’s “Global Times” newspaper, then began running a series of stories with accompanying editorials making clear a direct flight by Pelosi would not be tolerated.

In response, the Pentagon made known that the US Navy is setting-up concentric circles of “protection” for Pelosi’s plane!

Not only does Pelosi plan to enter Taiwan without getting approval from, or transiting through Beijing, now the US military is saying they will provide military protection for here to actually do it!   It’s almost as though the U.S. no longer acknowledges that China is its own sovereign country, and it makes the rules.

The Pentagon announcement of military protection for Pelosi’s plane caused even more backlash.  Just yesterday, the top Editor of the ‘Global Times” which is the mouthpiece of the China Communist Party, said the following:

While some may say “He’s just an Editor giving a newspaper opinion” readers must understand that media in China is tightly controlled by the Communist Party.  Absolutely nothing appears in China media unless it is approved by – or speaks for – the Communist Party.  So while the remarks above appear in a newspaper, they are very much the actual positions of the China government.

In addition to that very blunt and direct warning of having Pelosi aircraft FIRED UPON, China’s army began moving trainloads of Armor into Fujian Province, which is in mainland China, precisely opposite Taiwan: 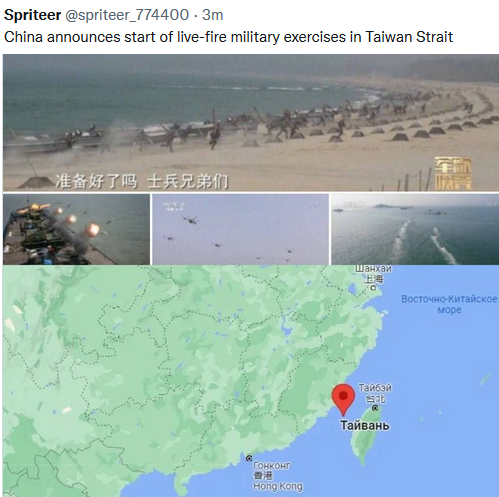 It is therefore clear that China has had quite enough of the US thinking it can do whatever it wants.   There very well may be a serious confrontation over Pelosi’s trip . . . if she tries to enter Taiwan.

CONFIRMED!  Pelosi has taken off in a US Air Force C-40 aircraft, headed out toward the Pacific Ocean,  as of early Saturday morning:

Pelosi’s plane made a landing in Hawaii around 9:00 AM EDT:

“If Pelosi tries to visit Taiwan, the Chinese will respond militarily.

Asked to comment on a recent Financial Times report which suggested Beijing would respond military should the speaker of the House visit Taiwan, China’s government confirmed the contents as true:

‘We are seriously prepared,’ Foreign Ministry spokesman Zhao Lijian said in regards to the article.

‘If the US side is bent on going its own way, China will take strong measures to resolutely respond and counteract. The United States should be held responsible for any serious consequences’” the official added.

We do not know what kind of military response, but at the moment, the American aircraft carrier USS Ronald Reagan and its strike group, including a guided missile destroyer and a guided missile cruiser, set out from Singapore on Monday heading northeast towards the South China Sea, according to ship-tracking information provided by Beijing-based think tank the South China Sea Strategic Probing Initiative. The US military has not disclosed its final destination, but the route would bring the carrier group to the Taiwan Strait if it continues in the same direction.

These provocations are a threat to the whole world, as are the provocations to Russia. Yet, the US and its cronies have failed to overthrow Hong Kong, they have failed to create an economic disaster in Xinjiang to destabilize this crossroad on the Belt and Road, and they failed in the Tibet Autonomous Region which is now a thriving region with no abject poverty or slave ownership of serfs and with protected religious and social mores, they failed the Trump trade war, and they will fail in Taiwan. They are failing in Latin America, they are even failing in Panama to safeguard their neoliberal democratic ‘free world’.

While failing everywhere, American politicians live in virtual reality and most seriously believe that the world belongs to them…”

Video has just been sent to me from minutes ago, showing part of the LIVE FIRE drill being conducted by China military off the coastline of Fujian Province, opposite Taiwan:

PLA Helicopters in Fujian Province take-off for “exercises.”   A group of Z-10 attack helicopters of the People’s Liberation Army of China takes to the range on the shores of the Taiwan Gulf during a large-scale live-fire exercise. U.S. Navy vessels in the area of Taiwan have begun their own, unscheduled, LIVE FIRE Exercises.

Three (3) of China’s largest/newest roll-on/roll-off civilian ferries appear to be off their normal routes and are in or have moved south toward the Taiwan Strait. All 3 are associated with the PLA.

From early this week, Taiwan has been engaging in actual Civil Defense Drills, with Sirens and evacuations, so people of the island know where to get into shelters when China attacks.

The Editor of China’s “Global Times” has tweeted the official position of China’s Communist Party:

“If Pelosi really visits Taiwan as planned, the Tsai Ing-wen authorities are accomplice. The mainland will definitely carry out severe punishment actions on Taiwan at the same time. The unbearable consequences will fall on Tsai authorities.”  –

From earlier in the day, video now emerges of China moving a division of the HQ-22 medium-range air defense system of the People’s Liberation Army of China toward the coastline of Fujian Province.  (This is a CORRECTION from  previously mis-identified hardware)

The Russian Wikipedia page for Pelosi has been updated to show her death date as 31st July, 2022.

The map below may be helpful for readers to grasp the potential theater of war in and around Taiwan: 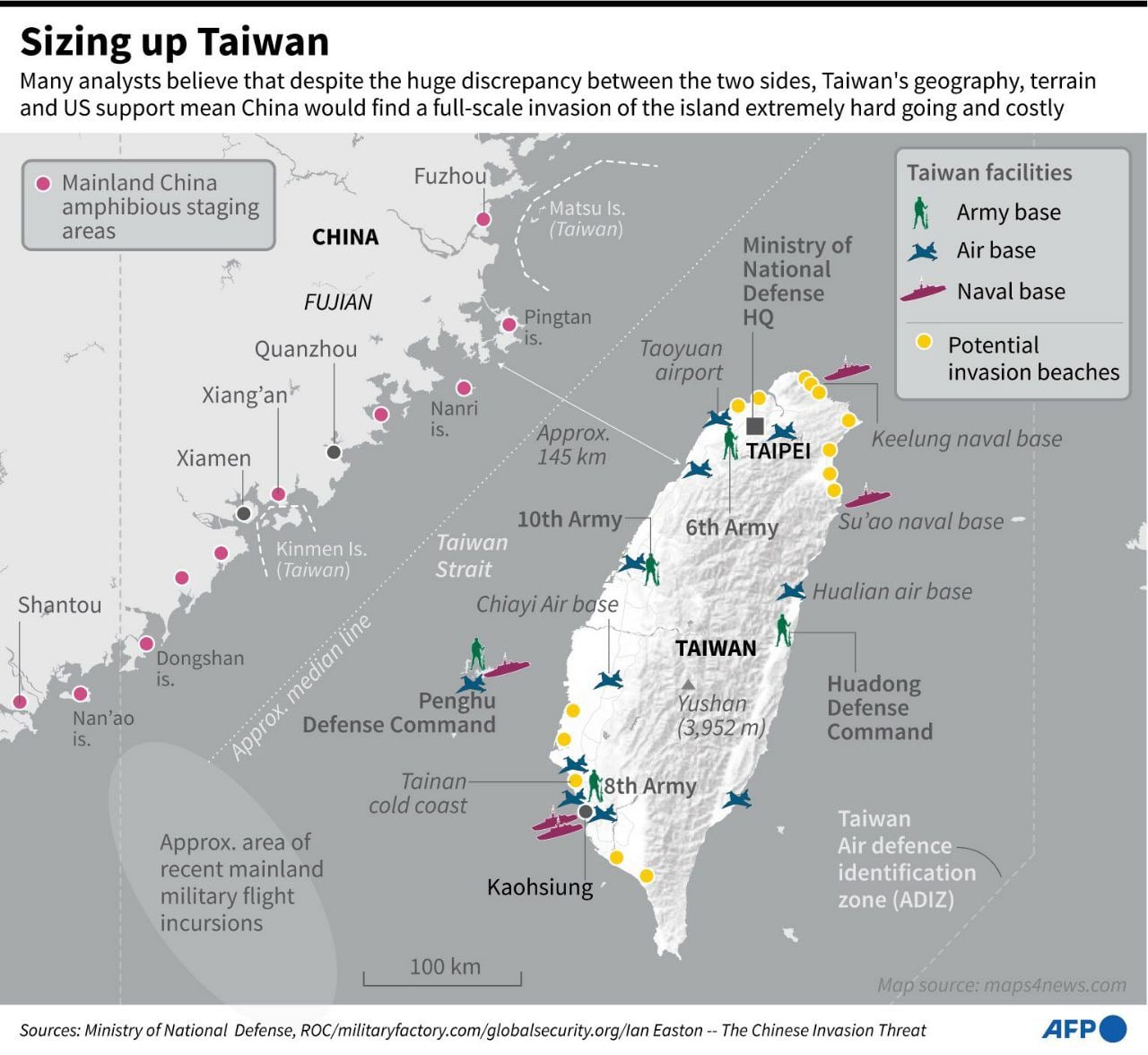