Russian Tochka Missiles in the air! U.S. Oil **Smugglers** and Their Depots Being hit AGAIN in Syria

Russia Tochka Missiles are in the air as of 11:30 PM eastern U.S. Time Sunday evening, as Russia and Syria attack oil smuggling operations yet AGAIN!

U.S., Turkish, and Israeli oil smugglers – and their trucks — are being targeted and destroyed for the second time in a week.

Video is emerging from the sites attacked.

Below, oil smuggler tractor trailers at the al-Hamran crossing between Syrian Defense Forces (US Proxies) and Turkish-held areas of Syria are ablaze after the missile strikes:

Another oil smuggling depot has also been attacked tonight. The Tarhin oil storage, refinery, and market near Turkish-held al-Bab in northern Aleppo, Syria is also now on fire.

Russia attacked and destroyed these and other oil storage facilities inside Syria a week ago to put a halt to US/Turkey/Israel stealing Syrian oil and profiting at an estimated $100 Million per month.

Instead of stopping the oil theft, the US, Turkey and Israel rebuilt essential parts of the storage facilities and kept right on stealing.   Now, they’ve been blown up again.

In the meantime, hundreds of tractor-trailer loads of weapons, ammunition and war-fighting supplies are being poured back into Syria by the US.  Under Biden, all the troops reductions and restraint against escalation that took place during the Trump Administration, is being undone.

It seems to many observers the US is coming back into Syria to finish under Biden, the overthrow of Syrian President Bashar Assad which was begun under Barack Obama.

This time, however, Russia has made clear such conduct will result in direct war with Russia.  The US does not seem phased and is continuing its escalations inside Syria.

Pictures now coming in from the second site attacked, Tarhin, Syria, which is also burning: 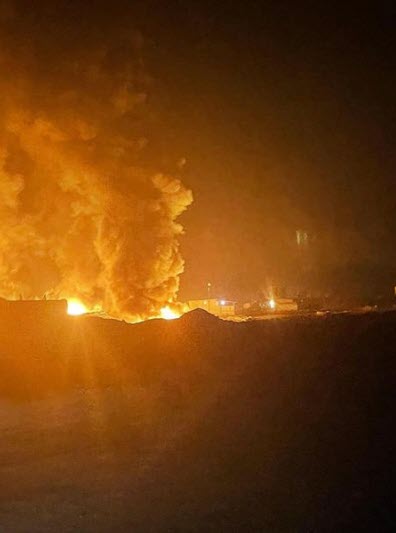 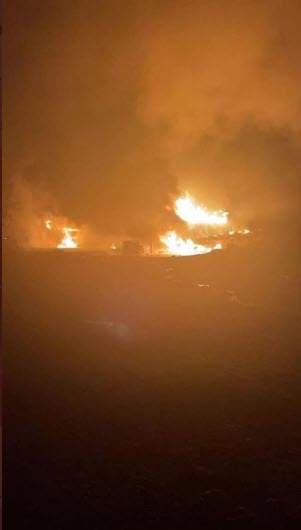 With this type of escalation, the world moves closer to actual warfare between Russia and the West.

Pro-Russian forces in breakaway areas of Luhansk and Donetsk in eastern Ukraine, have shot down a Turkish-made combat Drone being operated by the Ukrainian Army.  Shots have now been fired.

This web site has been reporting the build-up of troops, tanks, and armor, by the Ukrainian government, being positioned for use against the breakaway Luhansk and Donetsk Oblasts (states). Stories HERE, HERE, and HERE

Covert Intel reported that March 15 was likely to be the day when Ukraine commences a full scale military offensive to forcibly seize the two breakaway oblasts.

Today, March 14, the Ukraine military sent an armed combat drone, manufactured in Turkey, over the breakaway republics.  It is this exact type of drone that was used with devastating efficiency, allowing Azerbaijan to forcibly seize part of Armenia late last year.  Now, Ukraine is sending the same drone over Luhansk and Donetsk.

Below is an image of the drone that has been shot down in Ukraine: 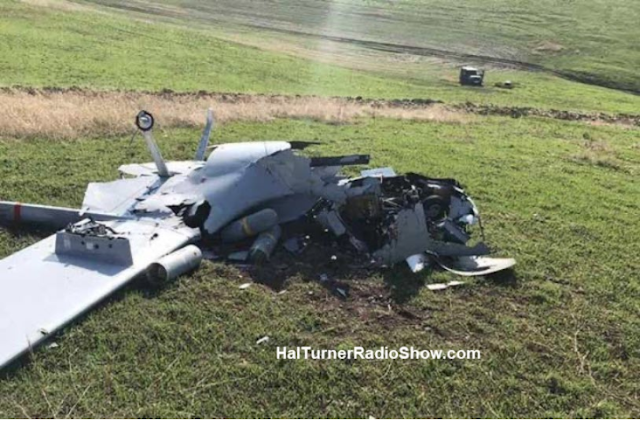 To give readers a better understanding of where all this is taking place, below are two maps.  The first shows Ukraine with the two breakaway Oblasts, Luhansk and Donetsk, highlighted: 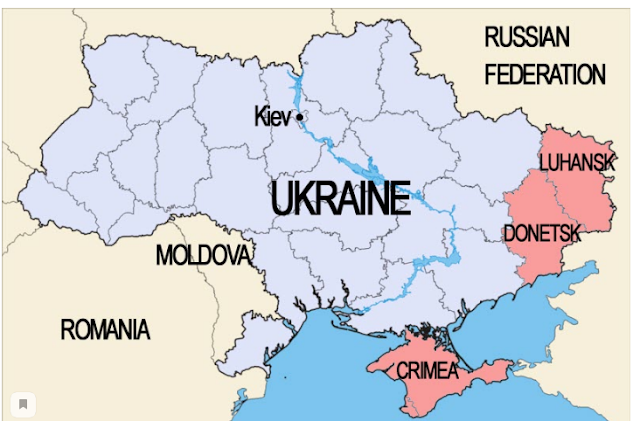 This second map show whose troops are presently where.  The colored lines show what’s what.

Red is Russia.  The solid Red line are Russian Troops along the Russian Border; a LOT of them now.

Farther west, red dots are either Russian or Pro-Russian Troops from Luhansk and Donetsk.

Blue is the Ukraine Army and elements of NATO nations like Britain the USA.

Yellow is where skirmishes are taking place.  The Contact line. 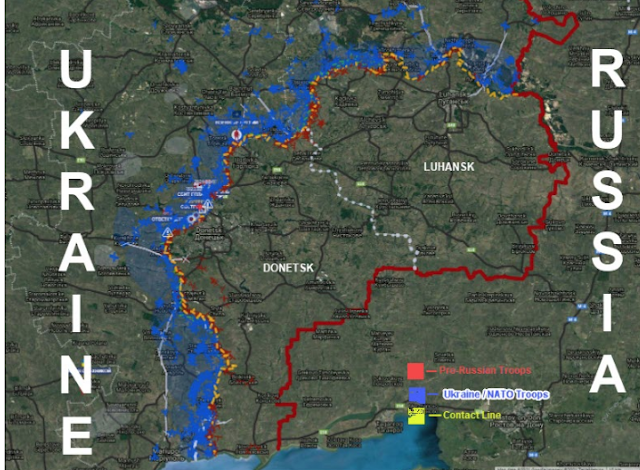 The area from blue moving right (east) to the solid red is where this trouble is very likely to become full scale war; quite possibly within the next 24 hours.