I have for months lamented the fact that there was no real opposition in this country, just a few hundred demonstrators here and there and groups doing their own thing.

That has changed quite quickly.  Last week there was a demonstration in Wellington with many thousands (with estimates of as much as 20,000 people) attended. One radio station put out that there were several hundred but in the end even the media had, in the end had to acknowledge that there were “thousands”.

Having failed on that front the media painted a picture of wannabe terrorists which they underwrote with pictures of a few people with Trump flags. But the reality was very different. Firstly, there was a hikoi (march) to Waitangi. It was reported that the marchers had been banned by iwi (tribal) leaders but the reality was that the hikoi was welcomed onto the marae in true Maori fashion while those wanting to join from south of Auckland were sealed off by police.

Then we had the embarrassing spectacle of Jacinda Adern cancelling a press conference when activist journalist Shane Chafin asked the prime minister some fairly basic questions about Israel and the UK. Then she had to retreat indoors from a pretty good number of protestors in Whanganui.

I believe that something similar happened to her in Hunterville. Here is Counterspin reporting on this.

But the prize for coverage has to go to Patrick Henningsen and UK Column who did a first-rate report,

In short, New Zealand has started to get some international attention for something other than Jacinda Adern’s diktats.

Then just a few days ago Shane Chavin and Counterspin released a recording of a recording with 30 year journalist at the NZ Herald, David Fisher.

This has had nothing like the attention it should have done but I can tell you it has dominated my consciousness in the past couple of days.

I have wondered about the NZ media position and how they can “report” the way they do.

But I need not wonder any more. Here we have the spectacle of a senior journalist who has done some significant investigations in the past devote his energies into trying to dig for dirt on Chavin so he could publish hit piece.

It all starts off with Fisher saying “no” to reports that NZ police had visited and then, in the next breath, only those with “concerning views” (ie. opposition to Adern’s woke agenda and her vaccine mandates and the like).

Chavin tried to keep the discussion and kept repeating the question “how many people have died, David“.

However, Fisher refused to even acknowledge the question and kept bringing it back to wanting to ask him why he puts his cellphone in the fridge in tinfoil and what his views on race etc, were.

Chavin did not let go and warned Fisher that if he published his allegations he would sue him.

Naive me thought after this sorry saga and with a warning from Chavin Fisher could not possibly go ahead with his intended hitpiece.

But, I was wrong of course and it came out behind a paywall. 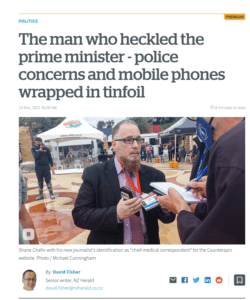 I am not going to read his piece because I have listened to over 30 minutes of their conversation and I do not like paying for my propaganda,

It was a sorry saga and David Fisher makes Rita Skeeter from the Harry Potter films seem positively principled by comparison and brings up comparisons with the Soviet media which used the term “anti-Soviet” with anything that was vaguely against the regime,

In fact, if anything, this seems worse than the Soviet example if we take into account about where this country and its Fourth Estate (now the fake news media) has come from.

The secret as to why the media has become what it has is partially explicable through the left/Woke ideology of much of what goes for media in this country but more significantly by the generous bailing out of the media to the tune of billions.

Shane Chavin tried to get an answer about this money but was ignored by Fisher who was more interested in fishing for dirt.

Ideology aside, you do not bite the hand that feeds you. Now, in Jacinda Adern’s New Zealand we we do not have a news outlet – print, radio or television- not a SINGLE ONE, ANYWHERE that asks even the most basic questions on covid-19, testing, why Israel, the UK and other places in the world are having such a pandemic of the vaccinated.

We do not even have a Daily Mail or a Sky News.

We are completely dependent on independent voices – the likes of Voices for Freedom, alt media like Counterspin and a few blogs. No one is willing to ask even the most basic of questions.

One noble exception is former television host, Liz Gunn. She does ask the real questions.

Meanwhile, something that has been somewhat of a riddle to me, “where’s Nicky Hager?” has been answered. On the same day that philosopher, Jordan Peterson has had a radical rethink on vaccination and vaccine mandates our once-respected leaders on the Left, both Nicky Hager and environmental campaigner, Mike Joy have go full-tilt in supporting Adern. 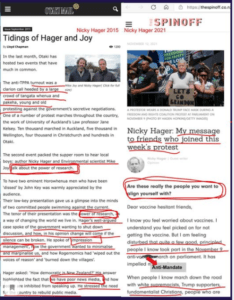 https://otakimail.co.nz/tidings-of-hager-and-joy/
https://thespinoff.co.nz/…/nicky-hager-my-message-to…/
I continue to be doubtful about turning this round. The government has learned from one example of a loss in the Supreme Court (and responded by immediately changing the law) and is not going to allow another loss in the Supreme Court.
Is it as simple as nominating a sympathetic judge or a brief phone call from the Prime Minster’s Department?
The reality is that New Zealand (or Australia or any other Commonwealth country) does not have any safeguards whatsoever. We do not have a Constitution but we have a belief in democracy and a system of Common Law judicial precedent. A lot of people believe in this but I am dubious about them being able to evoke their common law rights in a country that is eroding human rights.
We have laws that have been passed by legislation such as the Bill of Rights and various bits of other legislation.   We have a tradition based on the Magna Carta.
But the government just rides roughshod over all this (the Bill of Rights is cited only when it comes to rights for LGBTQ and furthering a woke agenda).
We also have the Nuremberg Code, but the government has decided that it does not apply.
In short there is nothing that the government will recognise that will guarantees informed consent, freedom of speech and word.
These things exist in the legislation but that is all.
The government is able to do this because the guarantees of democracy have been all but eroded over several governments.
There are no checks and balances any more.
All we have left are elections every three years which one suspects, are questionable.
Having been left bereft of any politicians I could even vaguely trust my attitude is “just leave us alone“.
But with governments that want to legislate and regulate every aspect of our lives there is not a chance in hell they will do that.

Meanwhile across the Tasman

Aussie Health Chief: The Unvaccinated Will Be “Miserable” and “Lonely” For Life

The Queensland president of the Australian Medical Association said during a television appearance that people still refusing to get the vaccine will be “miserable” and “lonely” for the rest of their lives.

“Oh, they’re crazy not to get vaccinated, life will be miserable without getting vaccinated,” said Dr. Chris Perry.

Perry also threatened people who falsely obtain a vaccine exemption that they will also be hit with fraud charges if they “try and get round the system.”

“It’s going to be very hard to maintain your employment if you’re not vaccinated and you won’t be able to go anywhere for any entertainment,” he said.

Perry concluded by saying that those who don’t get double jabbed will have “a very, very lonely life” and wouldn’t be able to maintain a job.

Now tell me again how the vaccine isn’t mandatory?

“In the age of social media, any potential slight headache or small, serious problem with the vaccines is magnified,” he said.

Here are a few “miserable” and “lonely” people

Tens of thousands rally in Melbourne to KILL THE BILL

Victorians have turned out in force on the streets of Melbourne against Daniel Andrews’ controversial pandemic legislation. 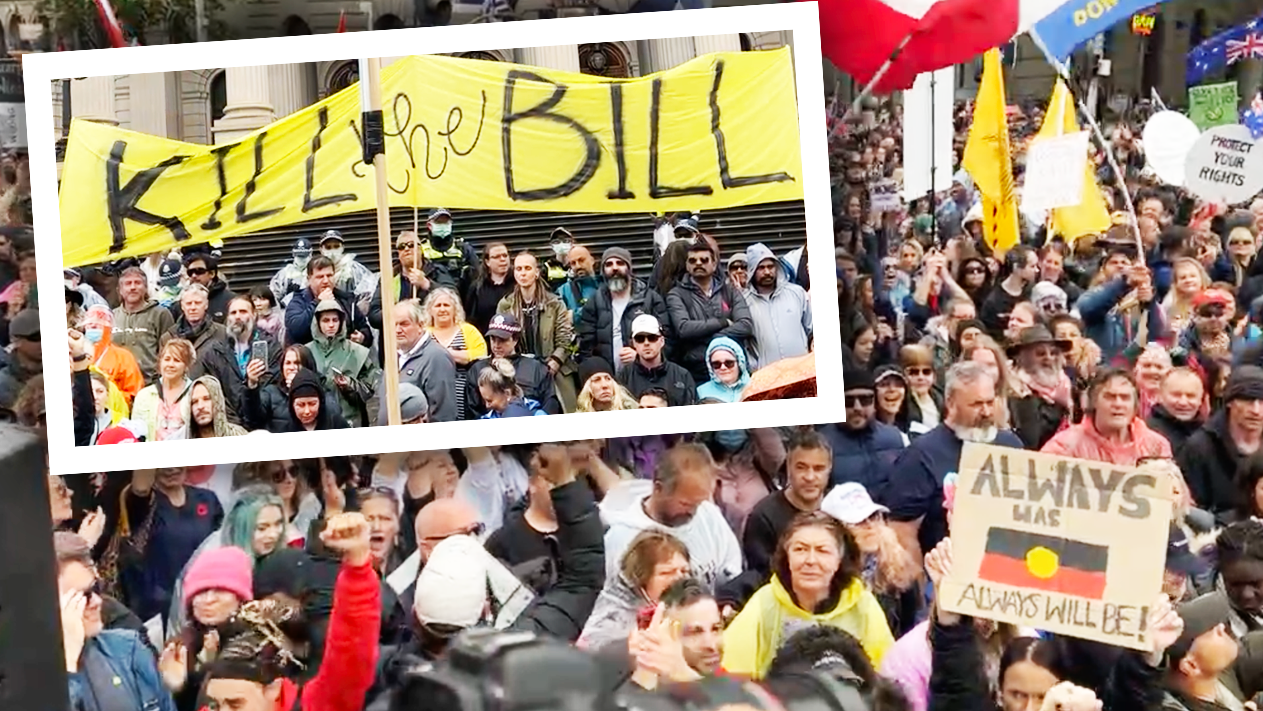 Victorians have turned out in force on the streets of Melbourne in huge numbers this weekend as part of continuing and growing protests against Daniel Andrews’ controversial pandemic legislation.

Loud calls to ‘Kill the Bill’ continue to be chanted by several groups as they make their way toward Parliament House where huge, peaceful crowds assembled for speeches and entertainment. The Bill has been described by lawyers as affording the Premier ‘indefinite dictatorial powers’ over the state of Victoria.

Others shout ‘Sack Dan Andrews!’ and carry signs demanding freedom of choice and an end to vaccine mandates which have seen thousands of Victorians sacked from their jobs in recent weeks. Crowds continued to swell throughout the day as a party atmosphere took over city streets with people dancing, cheering and playing music.

Last week, sixty of Victoria’s top QCs signed an open letter urging the government to reconsider the Public Health and Wellbeing Amendment (Pandemic Management) Bill 2021 which is set to endow the premier with dictatorial powers over Victoria.

Protesters have their Australian flags upside down in an internationally recognised signal of distress.

Despite confronting scenes at previous protests where police have deployed heavy tactics against protesters including an array of non-lethal weapons, police have on this occasion escorted the protest without attempting to stop it from reaching the steps of Parliament.

4 thoughts on “Has there been a turning of the tide in New Zealand?”