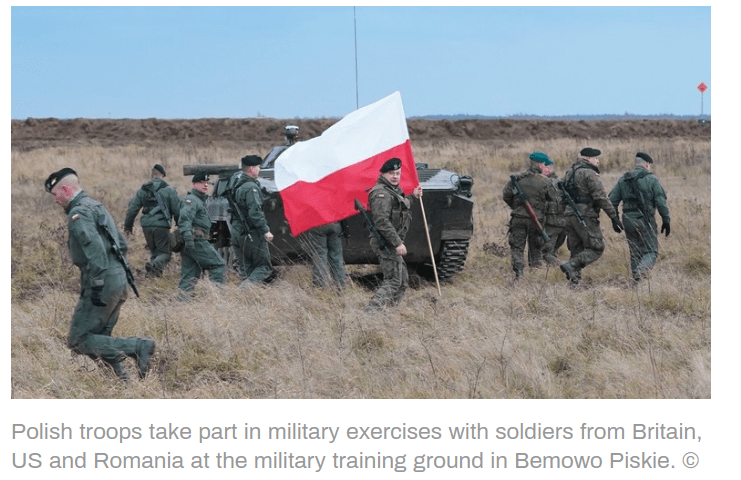 Intelligence obtained by Russia suggests that Poland and the US are working on a plan for Warsaw to regain control of Ukrainian areas that Warsaw considers as “historically belonging” to it, Moscow’s Foreign Intelligence Service (SVR) chief Sergey Naryshkin has said.

According to the alleged plan, the first stage of this “reunification” will see Polish “peacekeepers” deployed in western Ukraine under the pretext of “protection from Russian aggression,”Naryshkin outlined in a statement on Thursday.

US President wants to provide additional funds for Ukraine, as well as powers to seize and sell the assets of wealthy Russians

US President Joe Biden has asked Congress for an additional $33 billion in funding to prop up Ukraine in the ongoing conflict with Russia. A vast part of the massive package is destined for additional military and security aid, while the rest will be used for economic and humanitarian assistance.

“The Administration is requesting $20.4 billion in additional security and military assistance for Ukraine and for U.S. efforts to strengthen European security in cooperation with our NATO allies and other partners in the region,” the white House said in a statement.

A copy of “Mein Kampf*,” the political manifesto by Nazi Party leader Adolf Hitler, has been discovered at an Azov base in Mariupol, a Sputnik correspondent reports.

According to the correspondent, a Russian-language copy of the book was found at the barracks where the neo-Nazi battalion was stationed.

Genocide of Donbass: Evidence From the Lens of Photojournalist Mikhail Voskresenskiy

Sputnik photographer Mikhail Voskresenskiy has been documenting events in Donbass since the very first days of the eight-year conflict. This photo gallery is evidence of the genocide Donbass civilians are suffering. It shows scenes of conflict in the region as witnessed by the author.

Thousands of families have lost relations in this ongoing conflict for the right to remain Russian.

Photo: Residents of Donetsk region attend a memorial service for 21-year-old militiaman Aleksandr Lubenz, who was killed on 24 April during the shelling of a roadblock by the Ukrainian military.

Gonzalo Lira SPEAKS OUT About His Arrest in Ukraine

Staggering information is coming out of Turkish media outlets today claiming that at least fifty (50) senior officers of the French military, are trapped underground at the Azovstal steel mill plant in Mariupol Ukraine, surrounded by Russian troops.

The media is claiming that this information was kept ultra-secret due to the then-upcoming French presidential elections, and had the French people known that those men were in Ukraine, actually supervising Ukrainian war efforts against Russia, the French presidential election would likely have gone to Marie LePen instead of re-electing Emmanuel Macron.

The first shipments of Russian coal and crude oil, paid for in yuan, will arrive in China in April and May, respectively. Chinese state media used the opportunity to denigrate the United States, claiming that the international status of the U.S. dollar is “at risk.” However, financial expert Albert Song believes that it will not affect the U.S. dollar’s status as the leading global reserve currency.

Fenwei Energy Information Service Co., China’s leading information and service provider to the coal and coke industries, revealed that several Chinese companies purchased Russian coal in Chinese currency in March, and the first shipment would be made in April.

US Economy Crashes Headlong into Recession!

How grizzly is this bear?

Just a few days ago, Goldman Sachs was regarded as becoming the most bearish bank out there by forecasting — rather daintily now I think — we have a 35% chance of eventually seeing a recession in about a year! Deutsche Bank — the second-most bearish bank in the US right now — showed great boldness by prognosticating the US could go into recession in late 2023 — well over a year away!

The disinformation governance board would be the american “ministry of truth”

and that cannot be countenanced. make orwell fiction again

the disinformation governance board would be the american “ministry of truth”

wow. the US federal government is A LOT more worried about losing control of the informational narrative than i realized. this is some desperate, scary stuff. the department of homeland security is …

Instead of ‘following the science,’ the CDC and FDA ‘altered’ Covid guidance and ‘suppressed’ findings while under political pressure, accoridng to a 37-page report from the Government Accountability Office (GAO), a watchdog group which spoke with two former CDC directors, four former FDA directors and 17 employees who were involved with the US pandemic response.

Biden/Obama’s military is allegedly purging the US Armed forces of religious service members.

The Military Times reports on the religious purge by Obama’s military.

Air Force Capt. Jordan Karr, Army Maj. Samuel Sigoloff and Air Force Master Sgt. Nickolas Krupper made their cases from a variety of angles ― including religious freedom, controversy over the emergency authorization vs. Food and Drug Administration-approved version of the Pfizer vaccine and “natural immunity” to the novel coronavirus.

A total of 22 countries around the world have dropped mask mandates since January this year.

As debates over masks have returned to the United States after a judge struck down a federal mask mandate for interstate travel, the nation joined nearly to dozen countries which have ended broad mask and pandemic measures this year.

UK Prime Minister Boris Johnson announced the withdrawal of mask mandates in public places on Jan. 19, citing information from government researchers suggesting that the worst of the Omicron variant cases had already peaked.

Canadian gov’t has suspended over 2,500 employees who refuse to reveal COVID vaccine status

The federal workers have lost their salary and benefits, and the number of suspended employees doesn’t include members of the armed forces.

OTTAWA (LifeSiteNews) – More than 2,500 federal employees who have chosen not to reveal whether they’ve had the experimental COVID jabs were suspended from their jobs without pay by their federal managers.

According to Blacklock’s Reporter, those who’ve had their salary and benefits taken away include 66 people who work at the Department of Health and Canada’s Public Health Agency.

We’ve Become a Nation of Lab Rats – Sadly, Many Willingly

The inquest is one of a growing number to identify the AstraZeneca COVID shot as directly responsible for premature deaths, primarily involving blood clots.

Oli Akram Hoque, a trainee solicitor from Ilford, northeast of London, took AstraZeneca’s COVID shot on March 19 last year – shortly after the “vaccination” campaign had been rolled out for the 18–29 age bracket – and “subsequently complained of headaches,” which  gradually became more “excruciating” as the days and weeks progressed, the inquest heard.

As a nurse, I am not tone deaf to all the suffering that is ongoing around us. I realize that this information could be alarming for those who took the shots, therefore I’ve included a number of ways (below) to digest these clots preventatively, esp. Dr. Mercola’s recommendations. No matter what, my patients always tended to do better with more information, not less.]

Richard Hirschman has been a board-certified embalmer for over 20 years. In 2021, he started noticing very odd fibrous blood clots that he had never seen before.

According to published peer-reviewed articles and data from the Vaccine Adverse Event Reporting System (VAERS), girls, some as young as five years old, are developing genital ulcers due to Pfizer’s Wuhan coronavirus (COVID-19) mRNA vaccine.

One of the recently published medical journal articles, entitled ‘Post COVID-19 Vaccination Vulvar Aphthous Ulcers: An Unpopular Case Series‘ was published this month in the Journal of Pediatric and Adolescent Gynecology.

According to a recent essay published by researchers from Harvard, the University of Montreal and MIT in Aeon Mag, 77 per cent of all marketers and advertisers plan to use “dream-hacking” techniques to begin invading our dreams with advertising within the next three years.

A core topic of the essay was the recent Molson Coors beer marketing campaign, where the company offered free beers to people in exchange for taking part in a “dream incubation study,” as reported by American Craft Beer.

Shortly after Shanghai went into lockdown, Mark Liu volunteered to help authorities provide essential goods to millions of residents by becoming what’s known as a Dabai, or “Big White.”

The 33-year-old business director at a fund, who relocated to Shanghai recently from Hong Kong, hoped that signing up would allow him to get more transparent information on the Covid cases in his complex.

Engineered supply chain SHUTDOWNS are “CLOT SHOTS” against the global economy, designed to cause a debilitating STROKE across human civilization

(Natural News) If you think of shipping containers as red blood cells, the jamming up of these containers at the locked-down ports in China is the equivalent of blood clots in the human body. For an individual or a society to survive and thrive, resources must smoothly flow and be distributed across the system. Clot shots (covid vaccines) kill people by blocking that flow, just as deliberate shutdowns of port cities creates an economic arterial blockage with devastating effects.

It’s fascinating that the globalists, in their desire to tear down human civilization and achieve mass extermination on a global scale, have resorted to the exact same practice at both the nanotechnology (biological) scale as well as the global macro scale.

A transgender psychologist who has helped hundreds of teens transition has warned that it has “gone too far” — and fears many are making life-changing decisions because it’s “trendy” and pushed on social media.

Erica Anderson, 71 — who is transgender herself — told the Los Angeles Times that she is horrified that even 13-year-old kids are now getting hormone treatment without even meeting with psychologists.