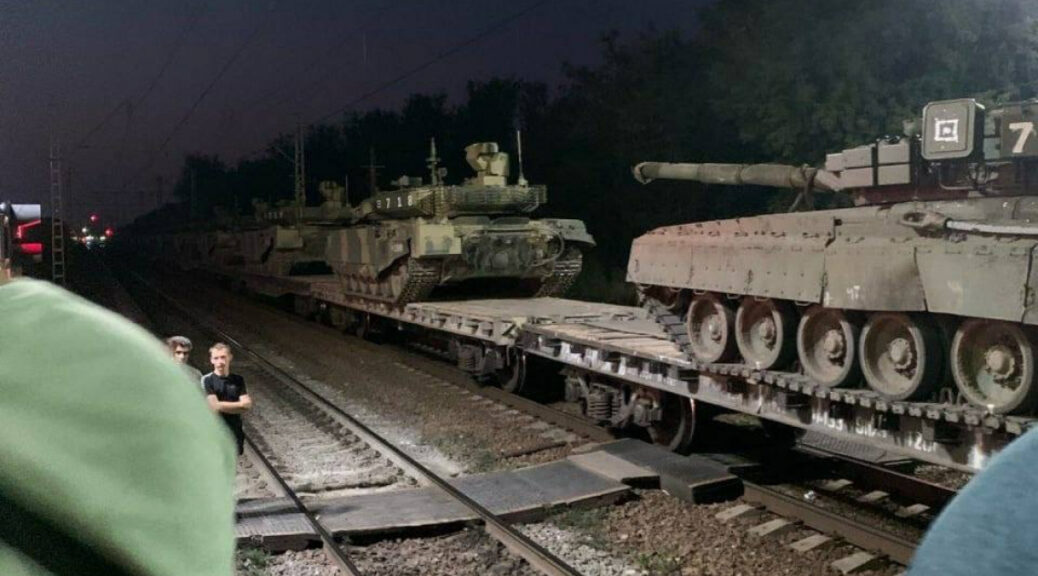 These were some of the headlines cited by Hal Turner.

4:43 PM EDT — Within the past two hours, the Rovenskaya Region of Ukraine (on map above) has come under a very large air assault by Russian jets flying in from Belarus.

Numerous and very large explosions are now reported in that region.

Reports claim that several large warehouses full of NATO-supplied weapons and ammunition, have come under direct air assault by Russian jets, have been bombed, and are burning ferociously.

This __may__ be a  result of a recent covert penetration of computers in the Main Intelligence Directorate of Ukraine, as reported earlier HERE

Other intel sources are claiming . . . . “It’s not the Ukrainians planning this false flag attack against IAEA inspectors, it is US/NATO who have planned it.”

Those other sources go on to claim “If it happens, it will be they who did it. Just like with Daria Dugina.”

Folks, I can now also report to all of you that things even in the Intelligence Community have become so vicious when it comes to this whole Russia-Ukraine thing, it’s actually becoming hard to tell who can be believed.   Thus, I reported both sides to you.

A covert penetration into computers at the Ukraine Main Intelligence Directorate got the complete scoop on the weapons smuggling routes and methods used by the US/UK/NATO into Ukraine.

After the information was grabbed, human assets were sent out to verify locations and methods; and they WERE verified!

The UK/US/NATO are using soft-sided tractor trailers, used in everyday commerce all over the world, to smuggle weapons and ammunition into Ukraine.  Here’s a photo showing some of it: 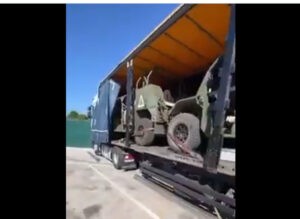 By doing this, the UK/US/NATO have just made _every_ civilian tractor trailer traveling the roads inside Ukraine, legitimate targets for military attack by Russia.  No truck driver inside Ukraine is safe from today. 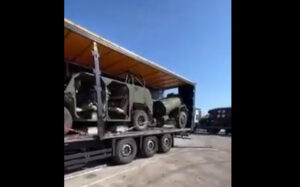 The hunt for Ukraine’s weapons-smuggling began in earnest in the month of May.  It was during that month that the British Defense Secretary, Ben Wallace, made public their search for all kinds of old Soviet-era weapons they wanted to get on behalf of Ukraine.

Lo and behold, where did they find the biggest cache with a very willing seller?   Russia “ally” Kazakhstan!

Kazakhstan used to be part of the Central Asia Military District of the old Soviet Union. Since that time, they have had such an enormous amount of old Soviet weaponry that they have been selling it for FORTY YEARS!

Through the penetration of Ukraine’s Main Intelligence Directorate, it was learned that in June, a Kazakhstan company, Technoexport, delivered 122mm shells for D-20 Howitzers into Ukraine by truck.  They also delivers 152mm shells for D-30 Howitzers and rockets for “GRAD” multiple launch rocket systems.  The June deliveries alone consisted of 20,000 shells and 30,000 rockets for about seventy million dollars ($70 million), paid for by the British government.

This weaponry was used to attack CIVILIANS in Donetsk.

The transactions were supervised by the Kazakh Foreign Ministry and the British Military Attache’ in Kazakhstan’s city of Nur-Sultan.

For some reason, all the import/export documents ended up on the main computers of the Ukraine Main Intelligence Directorate!

All the parties were apparently very satisfied with how everything went because right now, Sunday, August 28, 2022, while you are reading this story, the British Government is actively seeking to purchase 200 Armored vehicles, Anti-Tank Guided Missiles (ATGM) known as “Konkur” as well as 120mm Mortars from Kazakhstan.

To conceal this effort, both the British and, later, the Americans paid through companies in third countries.  The British used the country of Jordan.

When asked by the Hal Turner Radio Show to comment on this story, the Kazakh Ministry of Industry and Infrastructure Development, which would need to LICENSE weapons transfers, did not offer a response but instead immediately began to publicly DENY these transactions took place.  They issued a public statement:

The Ministry of Licenses for the export to the UK of weapons, ammunition, and military equipment, namely 122mm shells for D-20 Howitzers, 152mm shells for D-30 Howitzers, missiles for B-21 “GRAD” (BTR-4 and BTR-82A simplified modifications) and ammunition 120mm for Mortars and Konkur anti-tank systems, DID NOT ISSUE LICENSES   At the same time, the export of weapons and ammunition is carried out only if there is a guarantee obligation of the importing country (End-User Certificate or International Import Certificate) which provides for a mandatory norm that the importing country will not re-export these weapons and ammunition without the permission of the authorized body of the Republic of Kazakhstan in the field of export control. Permission for the re-export of the above mentioned weapons WAS NOT GIVEN by the Ministry.

(Hal Turner Remark: Did you notice they included mention of “B-21 “GRAD” and specified (BTR-4 and BTR-82A)?   I did not ASK them about those model numbers . . . .   so why did they include those model numbers in their public denial if no one asked about them?   Probably because they already KNEW what was actually shipped!   Hmmmmm. Convicted by their own denial?)

If the British liked using Jordan and their third-party cover, the Americans prefer Bulgaria.

As you are sitting wherever you are reading this story, the Americans are negotiating to buy SU-27 Fighter Jets, through a Bulgarian company . . . for Ukraine.

But the names of the Bulgarian company negotiators for these planes, are “Denisenko, Tsygankov, and Boyko” . . .  all of whom just happen to be citizens of . . . Ukraine.  This was proven from the documents that had also all been uploaded to the computers of the Main Intelligence Directorate of Ukraine.

What we apparently have here is a country, Kazakhstan, that is willing to completely bypass all normal, traditional, international weapons controls, take the money and ship such weaponry and ammunition to whomever pays.

They’ve done it before.

In 1999, it was Kazakhstan that was the source for MiG-21 aircraft sold to North Korea.

At the time, Kazakhstan’s Minister of Foreign Affairs, Kassym-Jomart Tokayev issued a public statement revealing “The deal was carried out by a group of people who bypassed the export control system of Kazakhstan, which excludes the supply of weapons to so-called problem countries.”

The then-President of Kazakhstan, Nursultan Nazarbyev, fired the Defense Minister, Muktar Altybayev and the head of the National Security Committee, Nurtai Abykaev, accusing them of insufficient control of weapons exports.

So Kazakhstan is a country with a documented history of ignoring arms-control export regulations.  It now seems they’ve done it again . . . and are STILL doing it at the time of the publication of this story.

Making things all the worse, Kazakhstan was saved earlier this year, from a “color revolution” when Russia, acting under the CTSO mutual assistance treaty, sent troops into Kazakhstan at the request of the Kazakh government, to put down a west-incited/facilitated overthrow of the Kazakhstan government.  So Russia saved Kazakhstan from overthrow, and elements within that very Kazakhstan government turned around and metaphorically stabbed Russia in the back by selling weapons and ammunition to the British and Americans, for use in killing Russian troops in Ukraine.

With an “ally” like Kazakhstan, who in Russia needs enemies?

The takeaway for readers is simple: The British and the US are participating in falsification of arms-controlled shipment documentation, and using civilian tractor trailers to smuggle those weapons into and throughout, Ukraine.   Doing this has made all trucks in Ukraine, legitimate targets for the Russian military to attack.  The UK/US/NATO are also covertly paying millions for these weapons and ammunition, through third-party countries, to kill Russians.

How much longer will it be before Russia decides that the British and US are, in fact, combatants in Ukraine, and unleashes retaliatory attacks upon Britain and upon the United States.

What the British and American governments are doing is endangering the lives of their citizens . . . and they don’t seem to care on wit that their actions may get millions of us, killed.

Saturday evening in Ukraine and in western Russia has brought images and video of many additional trainloads of Russian Armor and other military gear arriving in or near Ukraine.  Russia is clearly moving to step-up its game.

The video below, taken by a rider on a nearby train, shows a small part of a much larger trainload of armaments moving in Russia toward Ukraine: 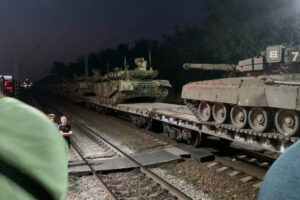 The image atop this story shows yet another trainload.

The situation for Ukraine is already dire and for all practical purposes, Ukraine has already lost.

The longer Ukraine holds-off negotiating a peace, the worse things seems to get for them. 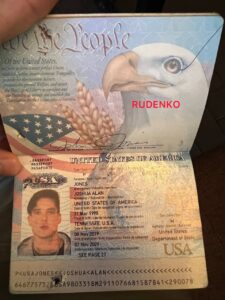 In the area of ​​​​the settlement of Yegorovka, Donetsk People’s Republic (DPR) troops found a body of a mercenary from the USA, Alan Joshua Jones, who lived in Tennessee before arriving in Ukraine. The dead body was mined. According to reports, he was shot by Ukraine troops after he tried to retreat . . .