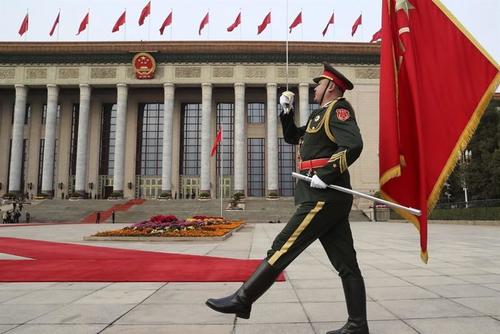 Chinese State Security Vice Minister Dong Jingwei would be highest-level defector in the history of the People’s Republic.

Dong Jingwei supposedly gave the U.S. information about the Wuhan Institute of Virology that changed the stance of the Biden Administration concerning the origins of the COVID-19 pandemic.

Former Pentagon, State Department and CIA expert Nicholas Eftimiades, author of Chinese Espionage: Operations and Tactics, called the report “exactly what it is, a rumor. It happens all the time” in the information warfare between Beijing and anti-communist overseas Chinese. But he called Dr. Han, a pro-democracy activist with the Washington, D.C.-based Citizen Power Initiative for China group, “a straight shooter, not known to exaggerate in any way or form…trusted for his integrity.”

Mollie Saltskog, a senior intelligence analyst with The Soufan Group, who earned a master’s degree in global affairs from Tsinghua University in Beijing, also urged caution, saying unconfirmed reports of defections surface regularly. And more: “While significant and certainly useful for our intelligence efforts,” she added, “one high-level defection will not drastically change our understanding or approach to China. In short, if true, this is potentially significant but not a game-changer.”

The U.S.-China spy war has intensified in recent years. Last year former CIA officer Alexander Yuk Ching Ma was charged with espionage on Beijing’s behalf. In 2020, another former CIA officer, Jerry Chun Shing Lee, was sentenced to 19 years in prison after pleading guilty to conspiring to give classified information to China. The year before, another former CIA officer, Kevin Patrick Mallory, was sentenced to 20 years in prison for spying for China, according to a New York Times roundup. Starting in 2010, Beijing “systematically dismantled C.I.A. spying operations in the country, killing or imprisoning more than a dozen sources over two years and crippling intelligence gathering there for years afterward,” the Times reported in 2017.

Chinese-language press stories also claim that Dong’s daughter Yang defected with him from Hong Kong on or about Feb. 10. She is allegedly the former spouse of a senior Alibaba Group executive, Jiang Fan, who heads up TMall, China’s big Amazon-like business. Alibaba founder Jack Ma came under fire from Beijing last fall after he criticized Chinese regulators and banks in a public forum in Shanghai. Authorities suspended a planned blockbuster $37 billion IPO for Alibaba’s financial affiliate Ant Group.

Corruption is rife in China’s state-directed economy, and it may have washed up on Dong. “He worked closely with Zhang Yue, who’s now serving 15 years imprisonment for corruption,” Dr. Han said. “Zhang was a confidant of Ma Jian, former MSS executive vice minister, who is also in prison for corruption.”

Dong “was last seen in public in September 2020,” Han said. His photos have been deleted by the Chinese search engine Baidu, according to some Chinese language news reports abroad.

Without naming Dong, the pro-Trump web site Red State reported June 4 on a high-level defection from China, saying the Defense Intelligence Agency had received information from him that Beijing is covering up biological warfare research at the Wuhan lab, and advanced its story to question the integrity of Dr. Anthony Fauci, director of the National Institute of Allergy and Infectious Diseases. “Sources say the level of confidence in the defector’s information is what has led to a sudden crisis of confidence in Dr. Anthony Fauci, adding that U.S. Army Medical Research Institute of Infectious Diseases (USAMRIID) personnel detailed to DIA have corroborated very technical details of information provided by the defector,” it said.

According to the authoritative Paris-based newsletter Intelligence Online, Dong is “close to” Chinese President Xi Jinping. “He previously headed the Guoanbu in the region of Hebei, which has produced many of Xi’s securocrats,” the publication reported in 2018. Back in 2010, IO reported that Dong carried out orders from superiors in Beijing to arrest “four Japanese employees of the Fujita Corporation who were filming in a forbidden military zone.” The move was seen at the time as a power play by State Security against then-President Hu Jintao.

Meanwhile, the Chinese State Council’s official web page listing the top personnel in the Ministry of State Security no longer lists any vice ministers working under MSS minister Chen Wenqing. Under “personnel developments” it notes the corruption investigation against another former vice minister, Ma Jian, who was sentenced to life in prison in 2018. The vice minister section is blank.

We now know the name of the Chinese defector who has been working with the Defense Intelligence Agency (DIA) for a few months and what his position within the Chinese military and government was, among other details.

Matthew Brazil and Jeff Stein at Spy Talk reported on the “rumor,” and gave the name and background of the rumored defector:

RedState’s sources confirmed that the defector is, in fact, Dong, that he was in charge of counterintelligence efforts in China, and that he flew to the United States in mid-February, allegedly to visit his daughter at a university in California. When Dong landed in California he contacted DIA officials and told them about his plans to defect and the information he’d brought with him. Dong then “hid in plain sight” for about two weeks before disappearing into DIA custody.

According to Spy Talk, Dong’s name came up during the Sino-American Summit held in Alaska in March 2021:

RedState’s sources say that Chinese officials did demand that the United States return Dong, but Blinken didn’t exactly refuse; at that time Blinken wasn’t aware that Dong was with the US government, the sources say, and told China that the US didn’t have Dong.

It’s only in the last three to four weeks that anyone outside DIA knew about the defector, according to RedState’s sources. Prior to that time, DIA was vetting the information provided and confronting Langley officials with what they’d learned without divulging the source.

Experts quoted in the Spy Talk piece essentially say that the defection is just a rumor and that rumors happen all the time, but that if it’s true it’s a big deal but “not game-changing.” Based on conversations with sources familiar with the information Dong has already provided and its quantity and reliability, that’s simply not the case. Not only does Dong have detailed information about China’s special weapons systems, the Chinese military’s operation of the Wuhan Institute of Virology and the origins of SARS-CoV-2, and the Chinese government’s assets and sources within the United States; Dong has extremely embarrassing and damaging information about our intelligence community and government officials in the “terabytes of data” he’s provided to the DIA.

Some of the information provided by Dong was reported on by the Washington Free Beacon earlier this week:

The episode is recounted in an internal report that circulated among various national security and law enforcement agencies on June 3. That report surmises that the Chinese students returned to the United States earlier than expected in order to avoid future travel restrictions caused by the COVID-19 pandemic.

“The team examined 58,000 inbound Chinese F/J visa holders in the [Passenger Name Record] database and identified 396 individuals whose return travel was [scheduled] after January 2020 but had returned in January 2020,” the report reads.

The Free Beacon reports that U.S. intelligence officials haven’t come to a conclusion about whether or not the students being investigated were spies, but RedState is told that whether or not one wants to use the term “spy,” those students were sent back to the United States with specific information-gathering directives with the purpose of helping Beijing understand the US government’s response to the pandemic at a much deeper level than they could through publicly-available documents. Those students (spies) were charged with reporting back on public policy changes, economic response and damage, impacts on the healthcare system (equipment/hospital bed shortages, etc), supply chain impacts (including how long it took things like semiconductors from China to reach the United States), civil unrest, and more.

In addition, Dong has provided DIA with the following information:

Dong also has provided DIA with copies of the contents of the hard drive on Hunter Biden’s laptop, showing the information the Chinese government has about Hunter’s pornography problem and about his (and Joe’s) business dealings with Chinese entities. Some of the files on Dong has provided shine a light on just how it was that the sale of Henniges Automotive (and their stealth technology) to Chinese military manufacturer AVIC Auto was approved.

As we initially reported, DIA has high confidence in the veracity of Dong’s claims. The fact that since our original report, which was pooh-poohed by Langley apologists, the New York Times published a rare interview with Dr. Shi Zhengli (the WIV “Bat Woman”), ABC News has started an “investigation” into COVID-19 origins, and now the actual name of the defector has been published in an anti-Trump, CIA-friendly blog, demonstrates what sources told RedState today: “This defector has the rest of the intelligence community and the LEO community scared sh**less.”

Join RedState VIP to support our conservative journalism and to use the promo code AMERICAFIRST to get 25% off VIP membership!

SpyTalk Conributing Editor Matthew Brazil is the co-author, with Peter Mattis, of Chinese Communist Espionage, An Intelligence Primer. SpyTalk Editor-in-Chief Jeff Stein earned an M.A. in China Studies from the University of California at Berkeley.