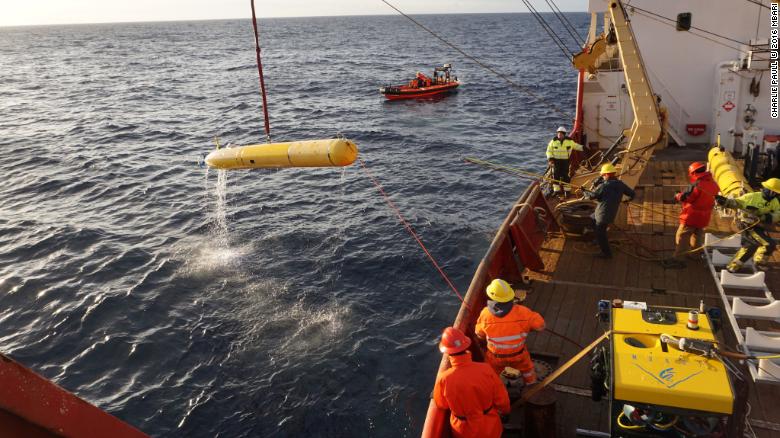 An autonomous underwater vehicle is recovered after completing a seafloor mapping mission in the Arctic Ocean. The remotely operated vehicle (foreground) is used to conduct visual surveys of the newly mapped seafloor.

(CNN) Marine scientists have discovered deep sinkholes — one larger than a city block of six-story buildings — and ice-filled hills that have formed “extraordinarily” rapidly on a remote part of the Arctic seafloor.

Mapping of Canada’s Beaufort Sea, using a remotely operated underwater vehicle and ship-mounted sonar, revealed the dramatic changes, which the researchers said are taking place as a result of thawing permafrost submerged underneath the seabed.
The changes the scientists observed occurred between 2010 and 2019, during which four mapping surveys had taken place, covering an area of up to 10 square miles (26 square kilometers). 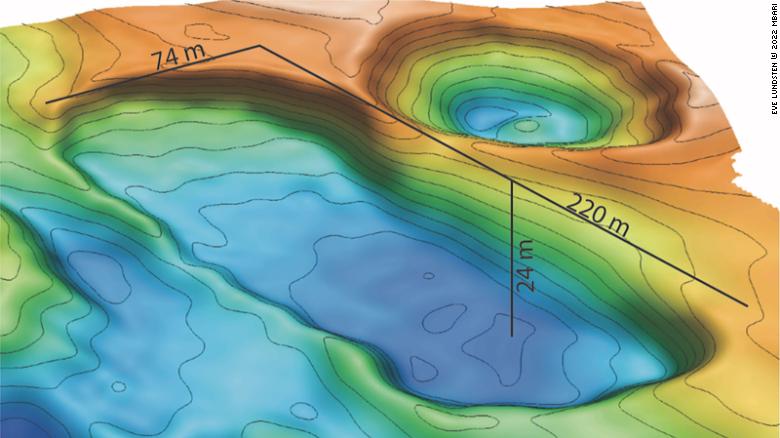 Mapping autonomous underwater vehicles detailed the unusually rough seafloor terrain along the edge of the continental shelf in the Arctic. Sinkholes have developed where permafrost at depth has thawed.
It’s the first time an area of submerged permafrost, a frozen layer of Earth’s surface, has been surveyed in this way, and it’s not known how widespread similar changes are elsewhere in the Arctic.
On land, thawing permafrost has led to radical shifts in the Arctic landscape, including ground collapses, the formation and disappearance of lakes, the emergence of mounds called pingos, and craters formed by blowouts of methane gas contained in the permafrost. These extreme features have affected infrastructure such as roads and pipelines.
“We know that big changes are happening across the Arctic landscape, but this is the first time we’ve been able to deploy technology to see that changes are happening offshore too,” said marine geologist Charlie Paull, a senior scientist at Monterey Bay Aquarium Research Institute and one of the lead authors of a study on the phenomenon published Monday in the peer-reviewed scientific journal PNAS.
“Clearly, such large changes would have significant implications for any infrastructure that might be placed on the seafloor. Currently, there is little infrastructure in this remote region of the Arctic. However, this may change as continued warming makes the region more accessible,” he added.

About one-quarter of the land in the Northern Hemisphere is underlain by permafrost, Paull said, including large areas under the sea. This is because at the end of the last ice age around 12,000 years ago, large swaths of permafrost were submerged as glaciers melted and sea levels rose.
In the 10-square-mile (26-square-kilometer) area of study, mapped in 2010 and again in 2019, the researchers found 41 steeply sided holes in the more recent mapping that weren’t there before. The holes were roughly circular or oval-shaped and averaged 22 feet (6.7 meters) deep. The greatest change was a depression 95 feet (29 meters) deep and 738 feet (225 meters) long and 312 feet (95 meters) wide — around the size of a city block made up of six-story buildings.
The research team also found “numerous” hills, typically 164 feet (50 meters) in diameter and 33 feet (10 meters) high, that contained ice. They are similar to pingos — ice-filled mounds found on land — the study said.
Surveys of smaller areas of the seafloor took place in 2013 and 2017, allowing researchers to understand the changes in finer detail. 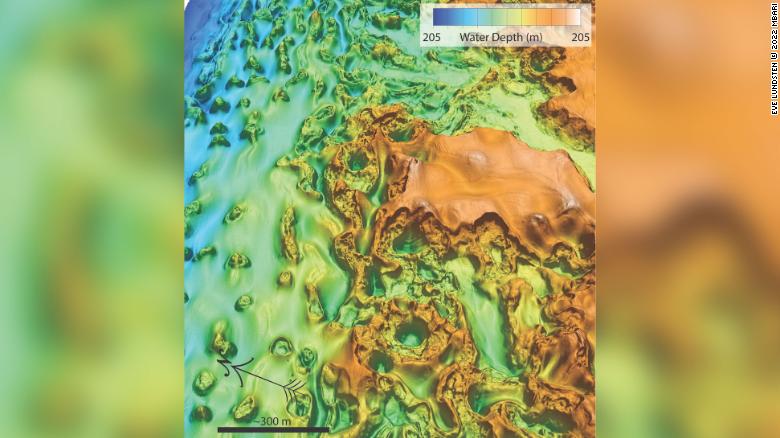 Repeated mapping surveys with autonomous underwater vehicles revealed a massive sinkhole developed over just nine years.
Evgeny Chuvilin, a research scientist at Skoltech in Russia who has studied the Siberian permafrost, said it was surprising to see changes like these occurring in such a short span of time. 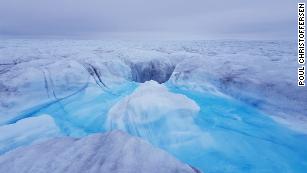 Greenland’s ice is melting from the bottom up — and far faster than previously thought, study shows
“Permafrost degradation is a slow process. We’re usually talking about centimeters per year. This here is more than merely degradation, it’s also a qualitative change. So, I would say that yes, it is unexpected to see,” Chuvilin, who wasn’t involved in the research, said.
“Hypotheses had been voiced in the literature concerning the possibility of such processes, but this is the first time they have been directly observed.”

Massive craters have been discovered in parts of the Russian Arctic that formed when the buildup of pockets of methane gas in the ground spontaneously exploded.
However, the Beaufort Sea researchers ruled out a similar origin for the marine sinkholes they discovered. The team didn’t find rocks and earth on the seafloor that would have been scattered by such an explosion. 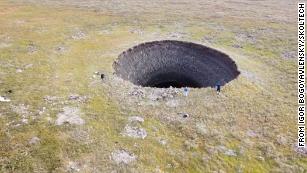 Mysteries of massive holes forming in Siberian permafrost unlocked by scientists
Plus, brackish (slightly salty) water near the seafloor suggested the seawater was mixed with groundwater and the submarine permafrost wasn’t a sealed system where overpressure could build up. Nor did they detect significant amounts of methane in the leaking groundwater.
“We do not have evidence that the rapid changes in this area are associated with explosive events,” Paull said via email.

The role of climate change

Many of the landscape changes seen on terrestrial permafrost have been attributed to warmer temperatures as a result of the climate crisis — the Arctic is warming two times faster than the global average. However, the authors said the changes they’d identified could not be explained by human-caused climate change.
“Since this is the first study of the decay of submerged permafrost, we don’t have long-term data for the seafloor temperature in this region. The data we do have aren’t showing a warming trend in these waters 150 meters (almost 500 feet) deep,” Paull said. 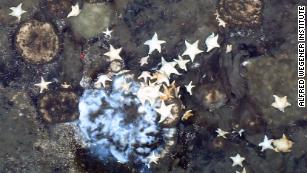 Sprawling sponge gardens found deep beneath the Arctic sea ice
Instead, the holes were likely caused by much older, slower climatic shifts that are related, he said, to our emergence from the last ice age and appear to have been happening for thousands of years.
“Heat carried in slowly moving groundwater systems is contributing to the decay of submerged permafrost, creating large sinkholes in some areas and ice-filled hills called pingos in other areas,” Paull said.
Water-filled cavities had replaced the excess ice that was once contained within the permafrost. When these cavities collapsed, the large sinkholes observed in this study were rapidly formed, he explained. The pingo-like mounds formed where the brackish water produced by the permafrost decay migrated upward and froze, blistering the seafloor with ice-cored mounds.
While the temperature of the groundwater was unknown, if it was 1.8 degrees Fahrenheit (1 degree Celsius) above freezing, it could melt an ice column over thousands of years, the study said.
Unlike land-based permafrost, which can respond on the scale of years to decades to climate change, subsea permafrost has a much slower response time in terms of climate impacts, said Sue Natali, Arctic program director and senior scientist at the Woodwell Climate Research Center in Massachusetts. “Changes described in this study are responding to events that occurred over the centennial to millennial time frame. That said, these changes can still impact climate if they are resulting in emissions of greenhouse gases as the subsea permafrost thaws.” Natali was not involved in the study.