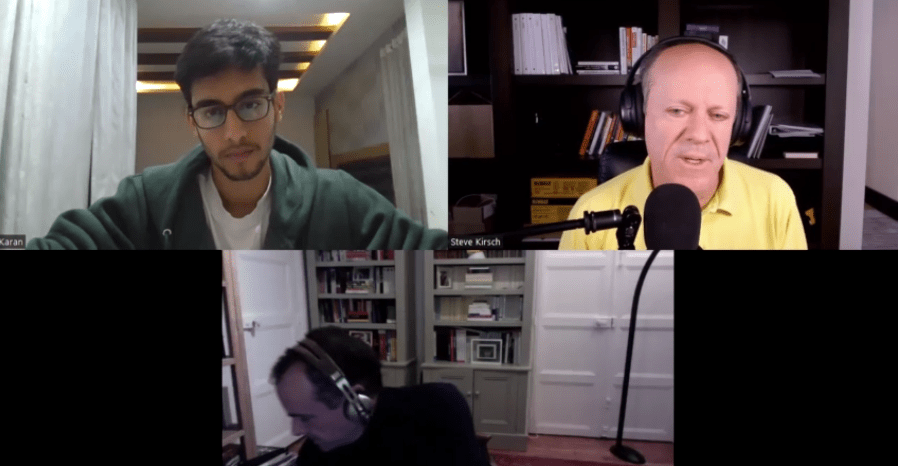 I don’t know if any money changed hands but this is the most depressing discussion I’ve listened to.

We see why no one will debate Steve Kirsch, even for $1million, not even Sean Plunket.

Is this what we are looking at?

I think we are looking at a new species of human.

His argument: it is impossible for the vaccines to have caused the deaths because there is no mechanism of action that could do that. It must be something else killing these people.

Karan, whose last name he asked me not to divulge, is a 5th year med school student in the UK. He reached out to challenge me on my claim that the vaccines have killed more people than they save.

I accepted because he said he was absolutely certain he could prove to me that the deaths could not have been caused by the vaccine.

Here’s the discussion. We agreed at the start of the session we were both interested in the truth.

He didn’t argue that any of the data showing the vaccines were unsafe was incorrect. He just said it couldn’t possibly have been the vaccines because vaccines approved by the FDA and other regulatory agencies don’t kill people. So it had to be something else that is doing things like killing young people in their sleep within 24 hours of their shot.

He claimed that even though he doesn’t know what is in the vials and didn’t dispute what I said about there being no end-to-end QA, he believes he is aware of all possible mechanisms of action for how vaccines work and none of these mechanisms can cause death.

I told him science is about looking at the data and finding the hypothesis which best fits the data. He admitted he didn’t have a better hypothesis to explain the data yet, only that it could not have been the vaccine.

We ended with my asking him to look at the Schwab paper and for him to explain the more likely cause of these deaths if it wasn’t the vaccine. That’s how science works. If you want to displace the current hypothesis about death(the Schwab paper), simply show us how your hypothesis is a better fit to all the Schwab data.

I also asked him about the criteria for a successful vaccine in a pandemic. He said the test is whether it reduces mortality from the virus. I said it should be that it reduces all-cause mortality. It wasn’t clear whether he ultimately agreed to this.

He agreed censorship is bad and that it is odd that the US authorities run and hide when asked if they want to see the safety data. He couldn’t explain that.

He has not spoken up publicly about the censorship and running from seeing credible evidence.

It appears that they train people that it is not your role to speak out publicly when unethical practices are happening in front of you.

Here’s the unedited interview. It might be hard to watch, but I think it’s useful because it shows the reasoning being used to ignore the data.

Note: Marc Girardot who writes Covid Myth Busters Substack joined me for this. Marc has some very interesting hypotheses as to why some people are more severely impacted than others (because some of the injection ended up in a vein). But that is just one possible mechanism.

Let me know what you think: