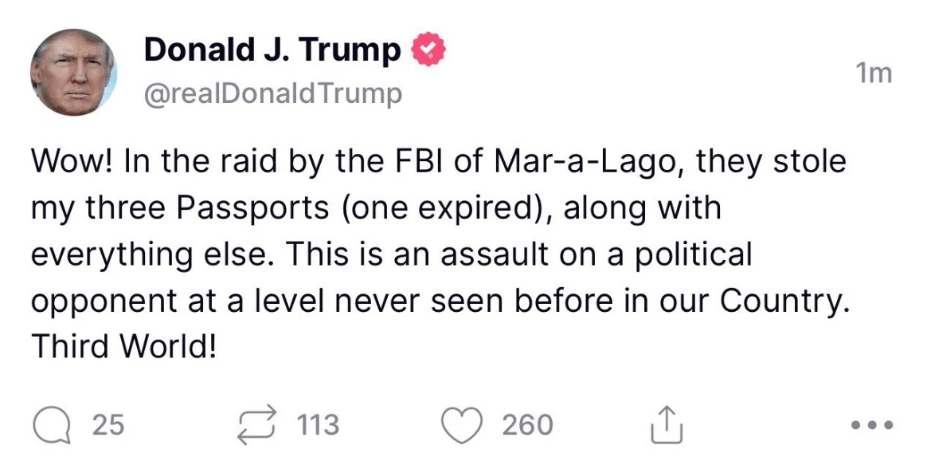 Our United States of America constitutional republic is in grave danger. A dangerous cabal conspired to destabilize and remove Donald Trump from the Presidency. They lied about the President. They spied on the President. They planted fake evidence. They assembled a dossier of false accusations. They planted spies in his campaign. They had spies in the White House. And now, they are talking about executing Donald Trump for treason. This nation cannot survive much longer if this evil cabal is not rooted out and imprisoned.

President Trump on Monday said the FBI seized his three passports in its raid of his Mar-a-Lago residence.

“Wow! In the raid by the FBI of Mar-a-Lago, they stole my three Passports (one expired), along with everything else. This is an assault on a political opponent at a level never seen before in our Country. Third World!” Trump said on his Truth Social page on Monday.

More than 3 dozen FBI agents descended on Trump’s Florida residence on Monday and searched the compound for several hours.

The FBI would not allow Trump’s lawyers to be anywhere near the areas that were rummaged through.

“Everyone was asked to leave the premises, they wanted to be left alone, without any witnesses to see what they were doing, taking or, hopefully not, “planting.” Why did they STRONGLY insist on having nobody watching them, everybody out?” Trump wrote on Truth Social on Wednesday.

The FBI raid was so urgent that the US government waited for more than a year-and-a-half after Trump left office to search for records related to ‘nuclear weapons.’

If this was such an urgent matter (it wasn’t) then why did the FBI wait several days until they descended on Trump’s home?

According to investigative reporter Paul Sperry, Hillary Clinton operatives in the Justice Department have been targeting Trump as an act of revenge.

Sperry also revealed the FBI may have had a personal stake and searched for classified documents related to Spygate.

According to Paul Sperry, the federal agents involved in the Mar-a-Lago raid are under investigation by Special Counsel John Durham.

Trump’s passports are not ‘classified documents’ so why did the FBI take them?