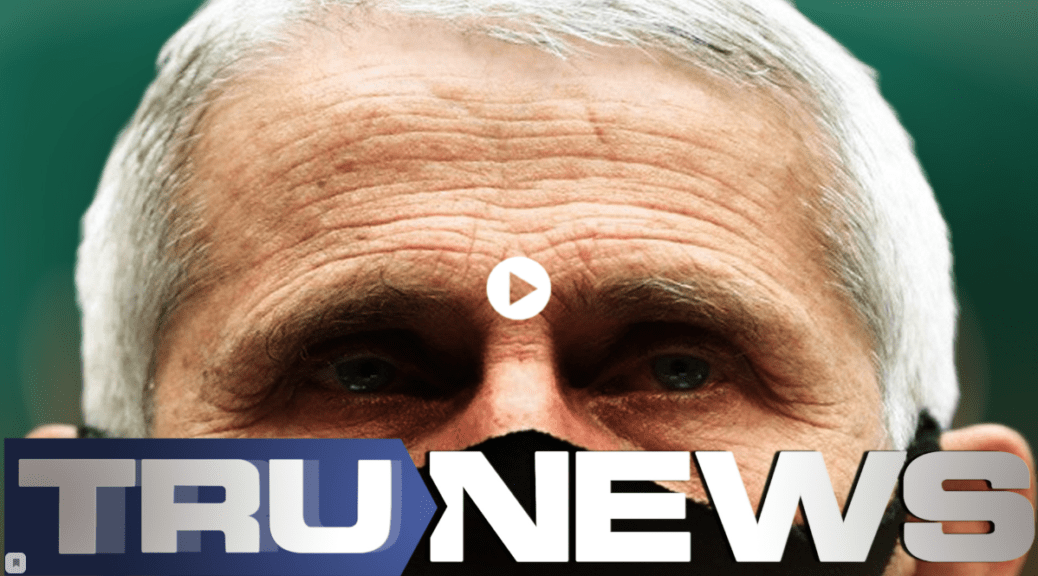 Today on TruNews, we discuss the bombshell revelation that vaccine producer Moderna worked with Dr. Fauci in December 2019 to send mRNA shots to the Wuhan bioweapons lab affiliated University of North Carolina BEFORE the pandemic was even declared!

We also shed light on the propaganda series Utopia from 2013, which eerily predicted that the elite would release a bioweapon on the world, then secretly sterilize the population with a vaccine.

I tracked down the video, “Utopia” (2020) they were discussing

EXCLUSIVE: Wuhan Lab Found All Genes To Recreate ‘Epidemic Strain’ Of Coronavirus In 2017.

The Wuhan Institute of Virology – increasingly believed to be the source for the SARS CoV-2 coronavirus – obtained “all the genes to make a SARS coronavirus similar to the epidemic strain,” according to a 2017 report by Science News.

The article – “Bats in China carry all the ingredients to make a new SARS virus” – documents how a Wuhan Institute of Virology research team led by the Fauci-funded “bat lady” Shi Zhengli sampled wild bats.

Also cross-posted to the Wuhan lab’s website, the November 30th 2017 report reveals how data collected by Shi’s team enabled the lab to “make a SARS coronavirus similar to the epidemic strain”:

“After five years of surveying bats in a cave in southern China’s Yunnan Province, Zhengli Shi and colleagues discovered 11 new strains of SARS-related viruses in horseshoe bats (especially in Rhinolophus sinicus). Within the strains, the researchers found all the genes to make a SARS coronavirus similar to the epidemic strain, says Shi, a virologist at the Wuhan Institute of Virology, Chinese Academy of Sciences.

These new strains are more similar to the human version of SARS than were previously identified bat viruses, says Matthew Frieman, a virologist at the University of Maryland in Baltimore.

The article, which was recently wiped from the Wuhan Institute of Virology’s website, also notes that Shi and her colleagues found that “several of the strains” could grow in human cells.

“By analyzing the new viruses’ complete genetic makeup, Shi and her colleagues retraced the steps that might have given rise to the original SARS virus. A few spots in the viruses’ DNA seem particularly prone to rearrangement, so remixing happens often. The study suggests that recombination between viruses has shaped the evolution of SARS, says Baric.

Several of the strains could already grow in human cells, Shi’s team found. That indicates “there’s a chance that the viruses that exist in these bats could jump to people,” Frieman says. “Whether they will or not is anybody’s guess.”

Dr. Ralph Baric – labeled by Shi as one of her “longtime collaborators” and recently referenced by Senator Rand Paul during his questioning of Dr. Anthony Fauci – is also quoted in the article:

The viruses “are poised to cause future outbreaks,” says virologist Ralph Baric of the University of North Carolina School of Medicine in Chapel Hill, who was not involved in the study. “We can’t let our guard down.”

The unearthed article follows The National Pulse revealing 2018 comments from Baric offering advice on how to “make money on the next pandemic.”

A confidentiality agreement shows potential coronavirus vaccine candidates were transferred from Moderna to the University of North Carolina in 2019, nineteen days prior to the official emergence of Covid-19 pandemic.

Silversea Cruises Official – Luxury Just Got Better
Could This Be The Most Luxurious Cruise Experience Ever? Free Roundtrip Air and Transfers on selected Cruises.

Silversea Cruises Official – Luxury Just Got Better
Could This Be The Most Luxurious Cruise Experience Ever? Free Roundtrip Air and Transfers on selected Cruises.

The confidentially agreement (read below) states that providers ‘Moderna’ alongside the ‘National Institute of Allergy and Infectious Diseases’ (NIAID) agreed to tranfer ‘mRNA coronavirus vaccine candidates’ developed and jointly-owned by NIAID and Moderna to recipients ‘The Universisty of North Carolina at Chapel Hill’ on the 12th December 2019.

The agreement was also signed by two representatives of the NIAID, one of whom was Amy F. Petrik PhD, a technology transfer specialist who signed the agreement on December 12th 2019 at 8:05 am.

The other signatory was Barney Graham MD PhD, an investigator for the NIAID, however this signature was not dated.

The final signatories on the agreement were Sunny Himansu, Moderna’s Investigator, and Shaun Ryan, Moderna’s Deputy General Councel. Both signautres were made on December 17th 2019.

All of these signatures were made prior to any knowledge of the emergence of the novel coronavirus. It wasn’t until December 31st 2019 that the World Health Organisation (WHO) became aware of an alleged cluster of viral pneumonia cases in Wuhan, China.

But even at this point they had not determined that an alleged new coronavirus was to blame, instead stating the pneumonia was of “unknown cause”.

It was not until January 9th 2020 that the WHO reported Chinese authorities had determined the outbreak was due to a novel coronavirus which later became known as SARS-CoV-2 with the resultant disease dubbed COVID-19.

So why was an mRNA coronavirus vaccine candidate developed by Moderna being transferred to the University of North Carolina on December 12th 2019?

Perhaps Moderna and the National Institute of Allergy and Infectious Diseases would like to explain themselves in a court of law?

American lawmakers have already introduced the Fire Fauci Act with the intention to fire Dr Anthony Fauci for misinformation with regards to COVID-19 and for covering-up the origin of the virus.

The Fire Fauci Act will bring Fauci’s salary to $0 and require Senate confirmation to fill his position.

In another major development, after over a year, Canadian authorities have released censored documents on deadly viruses stolen from Winnipeg to the Wuhan lab. GreatGameIndia was the first to report the Chinese espionage story in Jan 2020, for which we are being actively targeted by the NATO’s war propaganda arm – the Atlantic Council.

Read the confidential document below: 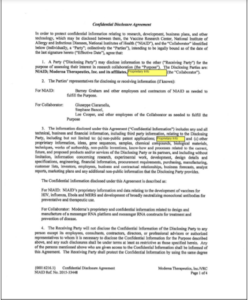