Every time I go on to the computer I go through a pallaver to get onto my own site to post material.

It only relates to seemorerocks.is, nothing else – everything loads fine except for certain websites such as the Defender.

After working for some time, more slowly than I should, but nevertheless successfully,  I am told that I have “lost connection” even though everything works fine elsewhere.

My usual response is to shut down and reboot and it often works OK after that for a while. My suspicion is that there is something within my own system that gets triggered under certain circumstances.

I have tried various ways to speed things up and usually I get met with blank looks and even an acknowledgement that things are operating other than as they should.

The response is usually some plugin or tweeking that will remove the problem. Except that it never does.

Just before, when working and trying to open a You Tube video I got this message on the Epic browser 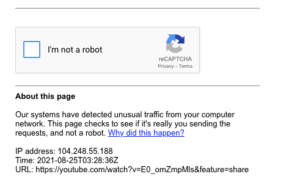 When I changed to another browser the problem went away but I suspect Epic picked up something untoward.

And then there was this from a reader who could not get any sound on a video he was trying to play:

Thanks for the response. I have managed to get sound on the older of the two phones I use.

The sound problem is coincident with the appearance of an on screen symbol that only appears when I’m on Seemorerocks and if tapped displays lines of descriptive code.

I don’ t think I’m being paranoid. I do not think there is a little person monitoring me 24/7 but there may well be AI or some sort of virus or trojan horse that is triggered.

There are forces that do not want the truth from getting out.

6 thoughts on “How I am being interfered with”