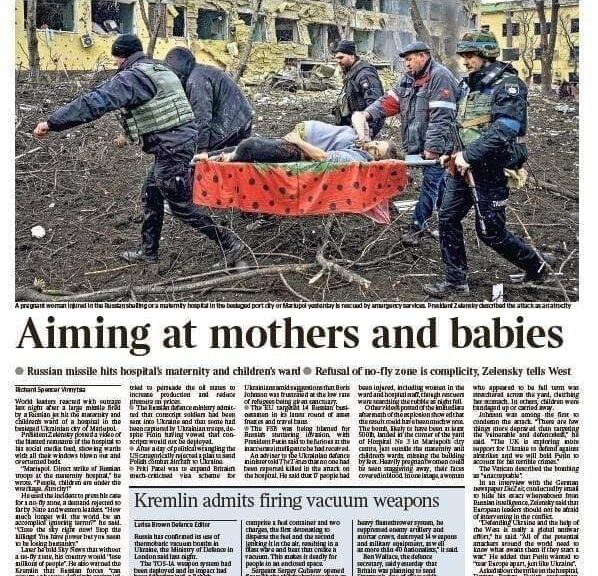 Maryanna was the girl that made headlines around the globe – with The Times claiming Russia was “aiming at mothers and babies”.

Maryanna says there wasn’t an air strike, the military was based in the hospital, the press was there from the get go (why?) and that she never wanted to be the feature of this report.

Woman from Mariupol maternity hospital explains what happened on March 9

A seven-minute video has appeared on pro-Russian media outlets telling the story of Marianna Vyshemirskaya — a woman who was injured in the much talked-about attack on the maternity hospital in Ukraine’s Mariupol, which took place on March 9. Marianna, who was a patient of that hospital, allegedly gave birth the next day after the attack.

The photos of Marianna Vyshemirskaya in the ruined maternity hospital taken by AP journalists Yevgeny Maloletka and Mstislav Chernov were publicised all over the world. 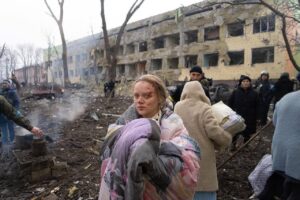 In the above-mentioned video, Marianna Vyshemirskaya said the following:

“I was admitted to this maternity hospital on March 6, because there was nowhere else to go. The military did not help in any way. One day they came and said that they had not eaten for five days and asked for food. They were told that all the food was for pregnant women, but they took our food anyway and said that we would make some more.

On March 9, “we heard a shell exploding. Then we heard another shell. I was a bit hurt by the shattered glass, I had cuts on my nose, a little, underneath my lip and above, but it was insignificant.” After the second explosion, we left. We were evacuated to the basement.

“We then began to discuss whether there was an air strike or not [by Russian aircraft]. They said that there was no air raid, that is, our opinion was confirmed that we did not hear, they [it is not clear who ‘they’] did not hear it either, they said that it was a projectile.

“There were only two explosions. We stayed there for five or ten minutes, nothing followed, and then the military came and began the evacuation. I was the last to leave. I stood there for 15 minutes, looking around the scene. I saw a military man in a helmet with a camera and asked him not to film me, because I didn’t want to be publicised anywhere. He said “okay” and walked away. And then on the ground floor, he started filming me.

“Then they came the next day [apparently, to another hospital, when Vyshemirskaya had already given birth], they said that they were from the Associated Press. I recognized them, they asked me, “when, what, how?” I said that there was no air raid, that no one heard it at all, even those who were out on the street.” Eventually, I didn’t find that interview, but for some reason I did find the rest, but not that one.

“The pregnant woman on a couch covered with a blanket, who was also on those AP photos and videos — it was not me, it was a woman who died. She was the first to be carried out, because she was in the most serious condition. She didn’t survive — neither her, nor her baby. It wasn’t me, I was not dressed up, I did not have any make up on.

“The Associated Press journalists, I believe, they were there from the start [at the maternity hospital on March 9], because we had two or three minutes to go down to the basement and, let’s say, we stayed there for another ten minutes.” 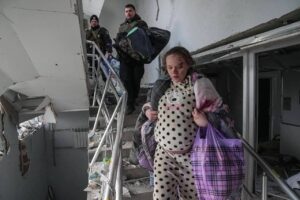 According to the ministry, the alleged airstrike is nothing but a completely orchestrated provocation to maintain anti-Russian sentiments among Western audiences.

“We have repeatedly stated before that Mariupol’s medical institutions, including Hospital No. 3, stopped their full-time operation in late February. Nationalists dispersed all their personnel and patients.

“The hospital building, due to its advantageous tactical location close to the city center, was converted into the stronghold of the Azov National Battalion. One can hear this from city residents, who moved both to Kyiv and the Donetsk People’s Republic.

“The photographs of the hospital grounds contain evidence of two separately staged explosions that took place near the hospital. One of them was a buried charge explosion, and the other one was a less powerful explosion that targeted the hospital building.

“The nature of both external and internal damage to the building may mislead non-professional audiences in Europe and the United States, for whom this performance was staged, but it may not mislead the experts. A high-explosive aviation projectile, even of smaller power, would have left practically nothing of the outer walls of the building.”