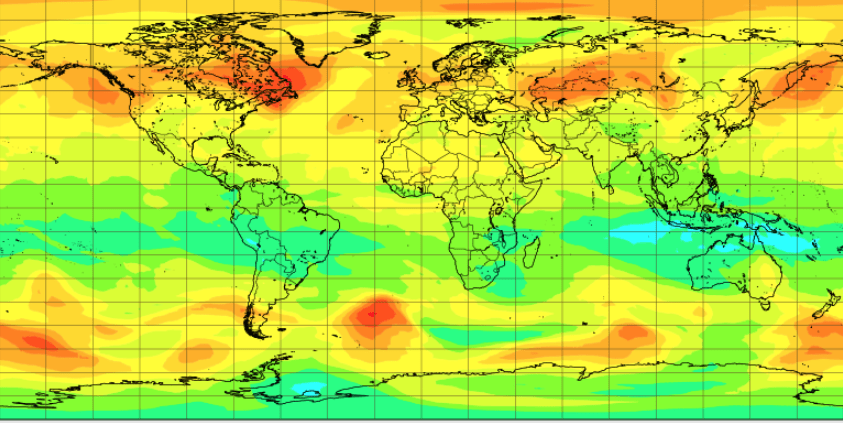 For about as long as I have been working with Margo she has been monitoring low ozone layers in the equatorial region and has noted how the situation has been getting worse.

Now, finally, scientists have caught up.

‘University of Waterloo’s Professor Qing-Bin Lu has discovered a large, all-season ozone hole in the lower stratosphere over the tropics (30 deg N – 30 deg S). The depth of this tropical ozone hole is comparable to that of the well-known springtime ozone hole over Antarctica, while its area is about seven times that of the latter.

The discovery of the whole-year ozone hole over the tropics came as a surprise to the scientific community, since it was not predicted by conventional photochemical models.

Its existence could cause a serious global concern as it can lead to increases in ground-level UV radiation and affect 50% of Earth’s surface area, which is home to approximately 50% of the world’s population. 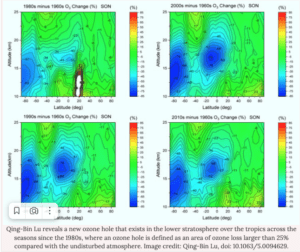 In the mid-1970s, atmospheric research suggested the ozone layer, which absorbs most of the Sun’s ultraviolet radiation, might be depleted because of industrial chemicals, primarily chlorofluorocarbons (CFCs).

The 1985 discovery of the Antarctic ozone hole confirmed ozone depletion caused by chlorofluorocarbons.

“The tropics constitute half the planet’s surface area and are home to about half the world’s population,” said Professor Lu, a researcher in the Department of Physics and Astronomy and the Departments of Biology and Chemistry at the University of Waterloo.

“The existence of the tropical ozone hole may cause a great global concern.”

“The depletion of the ozone layer can lead to increased ground-level UV radiation, which can increase risk of skin cancer and cataracts in humans, as well as weaken human immune systems, decrease agricultural productivity, and negatively affect sensitive aquatic organisms and ecosystems.”

The discovery of the whole-year ozone hole over the tropics came as a surprise to the scientific community, since it was not predicted by conventional photochemical models.

Its existence could cause a serious global concern as it can lead to increases in ground-level UV radiation and affect 50% of Earth’s surface area, which is home to approximately 50% of the world’s population.

Moreover, since ozone loss is well-known to lead to stratospheric cooling, the presence of the all-season tropical ozone hole and the seasonal polar ozone holes is equivalent to the formation of three ‘temperature holes’ in the global lower stratosphere.

“The discovery builds on previous studies of the cosmic-ray-driven electron reaction- (CRE) initiated ozone-depleting mechanism that we originally proposed about two decades ago,” Professor Lu said.

“The present discovery calls for further careful studies of ozone depletion, UV radiation change, increased cancer risks, and other negative effects on health and ecosystems in the tropical regions.”

The discovery is reported in a paper in the journal AIP Advances.

The other person who has been warning about this has been Dane Wigington of Geoengineeringwatch.org

Is It Game Over? New NASA Report

Global climate engineering operations have been pushed and propagated on the premise of cooling the planet by saturating Earth’s skies with sun blocking aerosols. The jet sprayed aerosols are intended to mimic the affect of extended volcanic eruptions. A new NASA science study has now confirmed that extended volcanic eruptions caused long term warming, not cooling. Worse, the ozone layer was decimated in the process. The 5+ minute video below exposes the flawed foundations of the climate engineering narrative and the grave dangers geoengineering operations pose to all life on Earth.

UVC: The Sterilization of Planet Earth