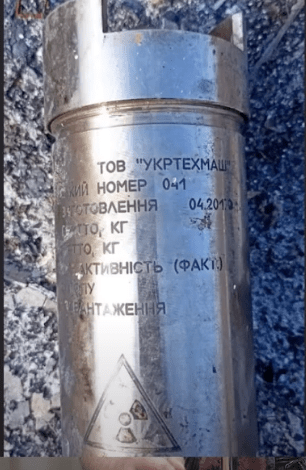 Russian forces intercepted a Western Tactical nuke in Ukrainian Military Control! This is a changing point, and incredibly dangerous. Tune in!

Here is a very rough transcription of PART of the conversation
Russel Bentley: This is some really important information. The situation in Donbass in the Ukraine war remains very serious up to this day. And there are a lot of things that are going on that a lot of people don’t know about. As you mentioned, we got some information from a reliable source Spetsnaz , like intelligence guy, on the way up here about why the Gostomel airport was one of the first targets in the beginning of the operation Z that was taken over by the VDV apparently there was an aeroplane there.
When was this?
This was in the end of February of this year. Okay, the beginning of the operation Z when the Russians finally actually did come in, of course
One of their first targets that they took over was the Gostomel airport. Okay, that was an airport that had military airplanes there and one of them.
We were told last night had a dirty bomb.
A nuclear weapon was on a plane called Moraz, which means dream in Ukrainian, and it was it was ready to go.
Now one of the first things that the Russians took over to prevent the Ukrainians from using it. There’s also very reliable information that at these Zaporozhia nuclear power plants, that there were experiments going on that had nothing to do with generating power, okay, they were using, they were doing experiments to make actual nuclear bombs , these dirty bombs.
And so you got to think that that wasn’t the only tactical knew that the Ukrainians had or that the Americans have brought in to Ukraine, since, the 1000s of tons of military aid that’s been coming in over the last eight months.
You know, the Ukrainians have absolutely no power to inspect or, you know, say yes or no about what the Americans bring in. So if the Americans wanted to have that tactical nukes here they would. It’s really not realistic to think that they don’t have other ones here.
And of course, these wouldn’t necessarily be to use against the Russians.
The first thing that they would do, as is one of their main techniques. Their favourite thing is false flag, right?
So they could detonate a small tactical nuke and Ukrainian held territory, most probably in an area that had majority Russian ethnic Russian civilians.
And then blame it on the Russians.
Saying the Russians were bombing themselves and all that, you know, and then and then so they set off a nuke on Ukrainian territory, say the Russians did it. And then, of course, NATO and the US especially would say, well, we have to respond in kind.
So this is a major threat, not only to the couple of hundred thousand reserves that are, you know, now being deployed, -those true concentrations would be really fat targets, or some tactical nukes.
But also, of course, I’m certain that they would say that, no, we also have to hit the decision making center of Russian military and occupied Ukraine, which is my hometown., Donetsk right now..
Well, it’s a serious deal.
And, I mean, the best thing that Russia can do is to regain the initiative. As long as it appears to the world that Russia is winning conventionally, then it doesn’t make sense for Russia to use a tactical nuke. I mean, so if they tried to make a false flag while Russia is winning conventionally, then, you know, intelligent people around the world gonna say, why would they use a new cut?
They’re already winning conventionally.
So, no, the point is, is that Russia must maintain the initiative, we must really, you know, get on the ball here and start making some major advances not just defending, but advancing, so that the world knows that Russia has absolutely no reason to use anything other than conventional weapons.
Tsvetochek:  I’m a member of a volunteers’ charity. We discuss important information.
And on the 9 October, there was information published by Army DPR group and volunteers.
The post contains photographs showing the evidence of the stuff that Ukrops used against our guys.
They throw it on positions like not from the sky but they shot from something. 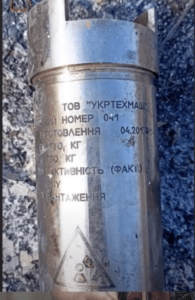 The containers with either chemicals or radiation. The direction of frontline is Gorlovka direction that will change directions upon the project direction on the 9th of October 2022 about 4pm
And from these containers, something that was leaking, and there was white smoke coming out of these containers and our guys who were on positions got either chemical or radiation poisoning and they had symptoms throwing up irritation of our own eyes.
They could not see anything because it was dark in dark in their eyes. Their joints were very painful.
Their gums, were bleeding, there was bleeding from ears and nose.
So these are the symptoms of radiation sickness.
So the containers diameter on the lens of a container is 40 centimeters