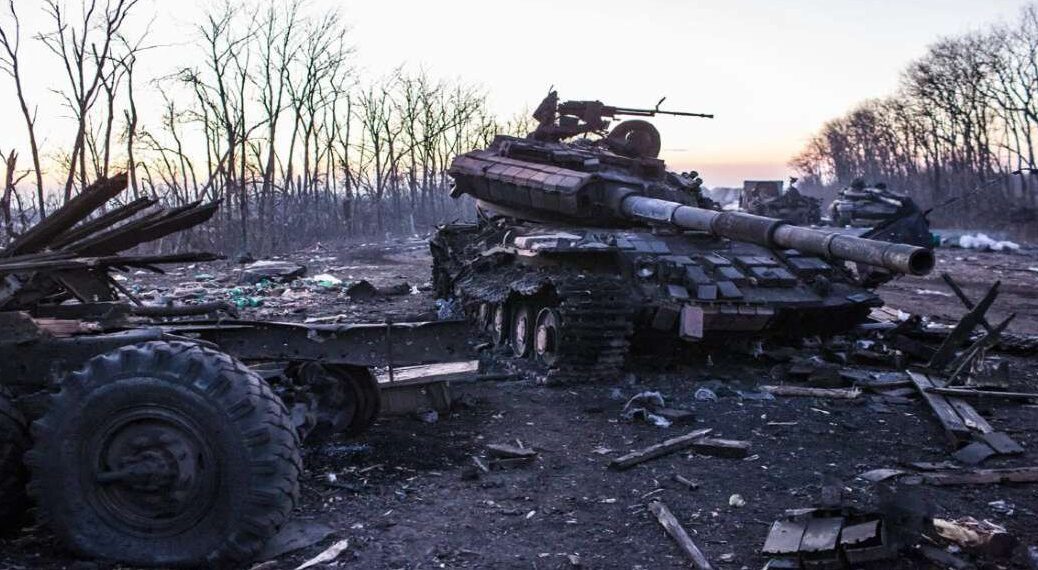 “The Russians are losing”.

There are videos in the original HERE

Shocking videos have been released showing the extent of the crushing defeat suffered by the Ukrainian forces in the latest counter-attacks in Kherson, which is credited to the new Commander of the Russian forces, General S.Surovikin.

There is already satisfaction in the Kremlin that several fronts have stabilized. There is better organization between forces and services. Regardless of what happens in the coming days, the Ukrainian Army has lost massive amounts of war material and soldiers.

In the recent counter-attacks, the Ukrainians have hundreds of dead and wounded.

In the rare audio-visual footage, you can see for the first time hand-to-hand combat between the Russian Airborne Forces and the Ukrainians. The Russian Paratroopers have been literally holding the Russian Army up for months waiting for reinforcements to be sent.

This is followed by the ambush set by the Russians on the Ukrainian forces resulting in the disappearance of an entire phalanx. At the end of the text you can see what happened when Ukrainians and Russians came “face to face”.

For the first time since the beginning of the war, such a material fact is published that shows that the battles in Kherson have entered their most critical phase.

In the Andreevsky and Berislav regions of Kherson by the evening of October 23 Russian Paratroopers captured a sabotage group of the 17th Ukrainian Brigade equipped with thermal imaging systems.

In the Andreevsky sector, the 46th separate Ukrainian brigade tried to advance in the area north of Ishchenko. Russian troops detected the movement of the Ukrainian group and launched artillery strikes on the advance areas.

In another Ukrainian counterattack, the Armed Forces of Ukraine, badly beaten by Russian marines, escaped from Bezymenny on the Kherson front

“The Armed Forces of Ukraine fled the village of Bezymennoe under heavy fire from the missile forces and artillery of the 810th Marine Brigade of the Russian Black Sea Fleet.

According to radio intercepts, hundreds of dead today alone. Well, we stand on the same border!” emphasizes the Commander of the marines Andrey Kamyzhikin.

On Monday, October 24, two Companies of the 3rd and 8th separate regiments of the Ukrainian special forces advanced to the areas of the village of Borozenskoye and the town of Pyatikhatki, 150 km northeast of Kherson.

At the same time, reinforcements arrived from the 17th Territorial Defense Battalion of the Armed Forces of Ukraine in KamAZ trucks and trucks specially equipped with heavy machine guns.

At five in the morning, these units were discovered by a Russian Orlan-30 unmanned aerial vehicle, which relayed the information to the relevant ground services.

The formations of the Armed Forces of Ukraine were attacked by Su-25 close support aircraft. In addition, 152 mm Giacint-B guns, as well as 300 mm MLRS Smerch, opened fire on Ukrainian special forces positions.

As a result of coordinated actions of the Armed Forces of the Russian Federation, more than 80 Ukrainian soldiers were killed while about a dozen units of military equipment, all Husky TSV armored vehicles and civilian vehicles were destroyed.

The Kherson region has turned into a vast graveyard of Ukrainian and NATO military equipment.

In video frames, you can see a huge number of destroyed tanks, armored vehicles and armored personnel carriers. The Ukrainian military phalanx was simply debased.

Ukrainian equipment was hit by precision weapons and anti-tank systems. This suggests that the advancing Ukrainian army forces were ambushed.

The location of the damaged equipment is quite remarkable. Group of Ukrainian troops destroyed while deploying in battle formation as tanks and armored vehicles are in offensive formation.

At the moment, the situation in the Kherson region remains very difficult, as in the coming days the Armed Forces of Ukraine are planning a new large-scale offensive.

Watchable video shows the Russian army hitting Ukrainian armored vehicles moving along a forested area. The Ukrainians abandon the armored vehicles and try to hide in the forests while others remain close to the TOMAs.

The Russians report that at least 6 Ukrainian soldiers were captured from this attack alone.

The Russian army then destroys the next armored vehicle.

At the same time, a sabotage and reconnaissance group of the Armed Forces of Ukraine was captured in Berislav in the Kherson region.

According to the deputy head of the regional command Kirill Stremousov, Russian and allied forces in the Andreevsky direction are successfully resisting the attempts of Ukrainian troops to break through the defense line near the Ingulets River.

For the protection of Kherson, a Territorial Defense Unit is currently being formed, to which all men remaining in the city can join. At the same time, according to the administration, security in the city is provided by law enforcement forces. It is also stated that the population of Kherson can at any time move to the left bank of the Dnieper.

Stremusov also noted that the Armed Forces of the Russian Federation are successfully repelling all Ukrainian attempts to advance in the direction of Kherson, and the situation remains stable.