Right now I prefer to stick with the here-and-now rather than with graphs and projections, thank you.

The NASA image below shows the October 2021 temperature anomaly. The Arctic is heating up enormously, with anomalies showing up of up to 9.1°C. 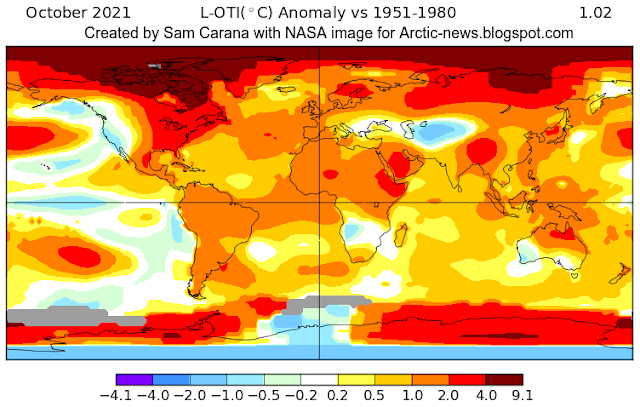 The image below shows that the global temperature over the past century, i.e. from 1920 to 2020, has risen by 1.3°C. The image shows anomalies from 1900-1920. When adjusting data to reflect a pre-industrial base, ocean air (2m) temperatures and higher polar anomalies, temperatures may have crossed 2°C long ago. 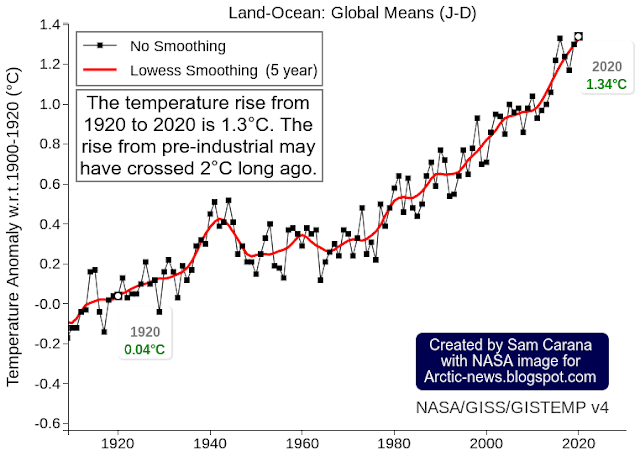 The image below shows two trends, based on NASA 1880-October 2021 data, adjusted to reflect a pre-industrial base, ocean air (2m) temperatures and higher polar anomalies. The linear trend (green) misses the point that the temperature rise is accelerating. The polynomial trend (black) shows the potential for 3°C to be crossed by 2026. 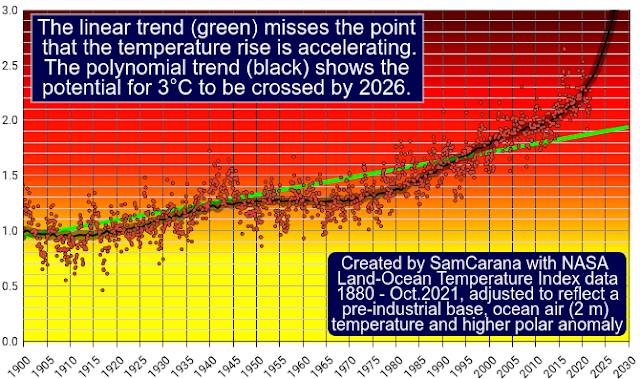 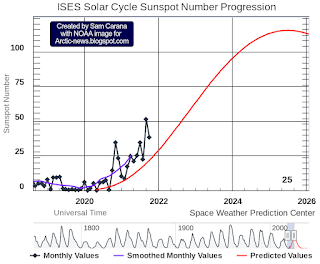 Acceleration of the temperature rise may speed up further soon, for a number of reasons:

Aerosols: As cleaner alternatives become more economic, and as calls for cleaner air become stronger, this could result in a strong temperature rise soon, as sulfate cooling falls away and more black carbon may result from more wood burning and forest fires, as discussed at the aerosols page.
Sunspots: Within a few years time, sunspots will be reaching the peak of their cycle, and they are looking stronger than forecast, as illustrated by the image on the right showing sunspots up to October 2021. 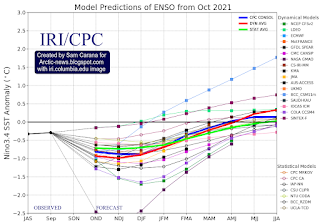 ENSO: An upcoming El Niño could raise surface temperatures significantly. The image on the right shows that the current La Niña is forecast to end in 2022 and move toward a new El Niño. As the temperature keeps rising, ever more frequent strong El Niño events are likely to occur, as confirmed by a recent study. Authors also confirm concerns that the IPCC downplays the threat that a super El Nino event could occur soon.
The image below indicates that the difference between the top of El Niño and the bottom of La Niña could be more than half a degree Celsius.

As illustrated by the bar on the right, there are many further elements that could dramatically push up the temperature soon. Altogether, the rise from pre-industrial could increase to more than 18°C by 2026.
As the image at the top shows, the Arctic is heating up enormously, with anomalies showing up of up to 9.1°C.
Decline of Arctic snow and ice can result in huge albedo losses, loss of latent heat buffer, jet stream changes, more and more extreme weather events, and more. Slowing down of the Atlantic meridional overturning circulation (AMOC) and increasing ocean stratification can result in less heat getting transferred from the atmosphere to the depths of the ocean, as also described at this page.

One of the largest threats is seafloor methane and despite repeated warning from some of the best experts in the field, the IPCC simply waves away this threat. This and other elements in the bar have been discussed in detail in many earlier posts such as this one and on the extinction page.

The image below shows three trends, i.e. the same black polynomial and green linear trends, based on NASA 1880-October 2021 data, and a blue polynomial trend based on 2015-October 2021 data. Data are again adjusted to reflect a pre-industrial base, ocean air (2m) temperatures and higher polar anomalies.
The blue polynomial trend better reflects short-term climate forcing such as aerosols, sunspots and an upcoming El Niño, as discussed above. The blue trend also shows the potential for 3°C to be crossed by the end of 2022. 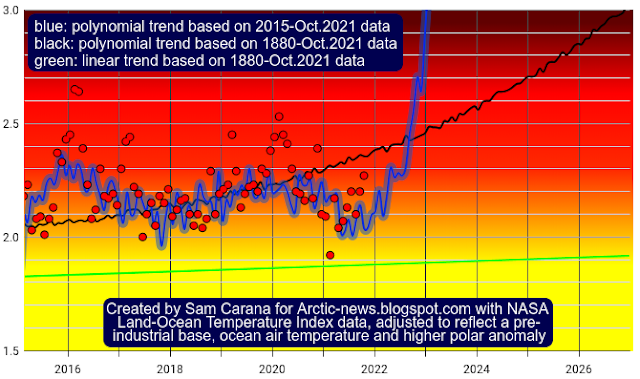 Given that humans may go extinct with a 3°C rise, and a 5°C rise will likely end most life on Earth, the COP26 summit in Glasgow could have acted more decidedly. The situation is dire and calls for the most comprehensive and effective action, as described at the Climate Plan.