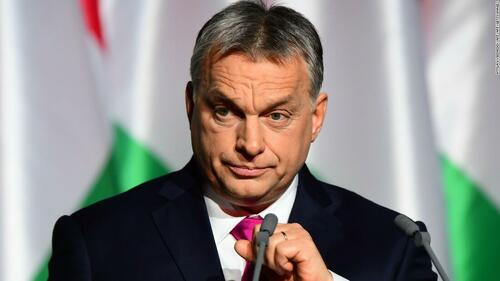 Hours after taking total control of Hungary by pushing through a constitutional amendment allowing his government to rule by decree when war breaks out in a neighboring country, Prime Minister Viktor Orban declared a wartime state of emergency.

According to Bloomberg, Parliament approved the state of emergency earlier Tuesday which will take effect at midnight. It will give Orban’s government “maneuvering room and the ability to react immediately” to the ongoing war in neighboring Ukraine, Orban said in a Facebook video message.

Bloomberg, of course, paints it as a victory for “the banner carrier for nationalists worldwide.”

The move comes after Orban told US right-wing celebrities last week at an event in Budapest, which included a video message from former President Donald Trump, that the recipe for wielding full power over a nation requires building your own media and institutions. And, above all, ditching established political norms to “play by our own rules.”

“We need maneuvering and the ability to take action immediately,” Orban said after his ministers took the oath of office. The state of emergency, which he said he called because of the Russia’s attack against neighboring Ukraine, will allow him to use “all tools” of the state, he said.

Now he’s the banner carrier for nationalists worldwide, with Trump praising him as a “great leader” in a video stream at the conference. -Bloomberg

On Wednesday, Hungary will announce its first measures under the new state of emergency – which Orban began laying groundwork for even before his cabinet’s swearing in ceremony on Tuesday. Besides amending the constitution in order to use his new emergency powers, the 58-year-old leader gave his chief of staff oversight of the country’s intelligence services.

Orban, the EU’s longest serving head of government, is sitting on his fourth consecutive administration following yet another landslide election victory last month. He’s notably clashed with other member nations on a range of issues, including his opposition to an EU ban on Russian oil.

It was Hal Turner who alerted me to this

The country of Hungary will declare a “WARTIME EMERGENCY” at midnight tonight.

Prime Minister Orban says “the government will declare a state of war from midnight today” to “protect Hungary and Hungarian families by all possible means” in a video posted on Facebook.

So clearly he knows something gigantic is about to take place.   The “something” must clearly be actual “war” because they’re actually saying it!

This seems to be “it” folks.

Be prepared by tonight to bug-out to any backup shelter you may have, and make sure you have food, water, medicine, and COMMS,  because if this thing goes wild weasel between Russia-Ukraine/NATO, it will happen so fast people won’t even have time to think.