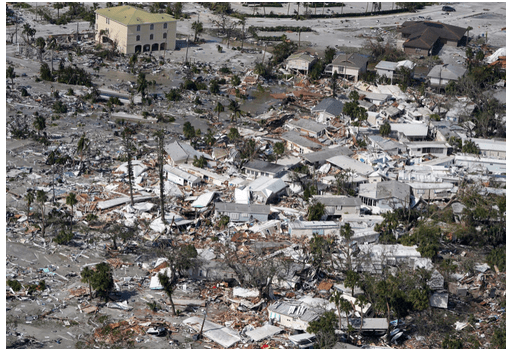 One resident told Tampa Bay Times, “it looks like somebody took an atom bomb and dropped it,” referring to the widespread damage across Southwest Florida following the devastating hurricane that made landfall about 24 hours ago near Fort Myers as a Cat. 4 storm. 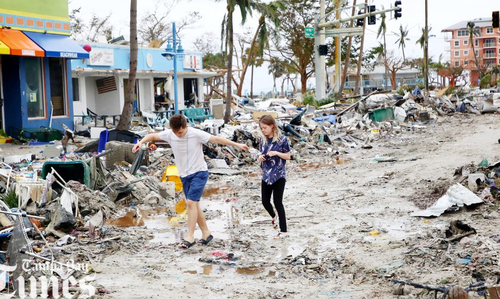 The footage is absolutely shocking.

Ft Myers Beach is effectively gone, almost no emergency crews yet. These poor people need so much help… pic.twitter.com/5uLo26zFMZ

This morning Sheriff Carmine Marceno took a tour of Lee County to begin assessing damage caused by Hurricane Ian.
We are devastated. Our hearts go out to every resident who is impacted. The Lee County Sheriffs Office is mobile and will stop at nothing to help our residents. pic.twitter.com/S4OsB8ajRv

Fort Myers Beach is leveled. I’m in disbelief and absolutely heartbroken for the people of SWFL. The area is changed forever 💔 #hurricaneian #fortmyersbeach #fmb pic.twitter.com/A8T4NSm4sE

The power of water.

Fort Myers Beach, before and after Hurricane Ian.

Before & after Hurricane #Ian

JUST IN: “The amount of water that’s been rising…is basically a 500-year flood event.”

Florida Gov. Ron DeSantis warns that there is a potential for major flooding “hundreds of miles” from where Hurricane Ian made landfall. https://t.co/23eIyeHVo4 pic.twitter.com/sjKifjqrty

As the day keeps going, we’ll get a better sense of the devastation. #HurricaneIan pic.twitter.com/svoD7VNmpn

Images show destruction and devastation in Ft. Myers, Florida, after Hurricane Ian ripped through the region.

Hurricane Ian was downgraded to a tropical storm early Thursday morning as it traversed northeastward across central Florida, dumping torrential rain while still packing strong winds across a large swath of the state.

About 2.6 million homes and businesses are without power, according to PowerOutage.us. The most significant number of outages are based in the southwest Florida region, where the hurricane made landfall.

Shocking footage yesterday revealed the surge sent a wall of water roaring inland that was as high as some homes. Streets were instantly transformed into rivers. We pointed out last night that total storm damage could be upwards of $70 billion.

I’m sick to my stomach seeing these photos of the incredible storm surge that hit Fort Myers, Florida as the eye of Hurricane Ian moved onshore Wednesday.
Easily over 10 feet of water up to the roofs in some spots. pic.twitter.com/S6tViQf5Kv

Storm surge outside of my moms house on Fort Myers Beach.

Lee County Sheriff Carmine Marceno told ABC’s Good Morning America that he believes “fatalities are in the hundreds” after Ian devastated his county, which includes Fort Myers, Cape Coral, and Bonita Springs, areas that experienced extreme storm surges yesterday and into the overnight.

The storm’s economic impact on Florida’s manufacturing, agriculture, and distribution sectors will be felt for weeks, if not months. It could also upend Florida’s home-insurance market, where insurers likely face billions of dollars in losses.