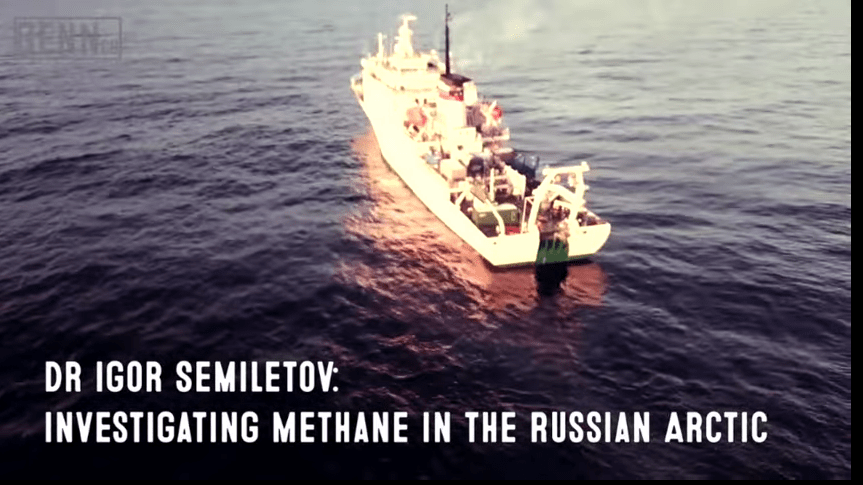 The whole series will also be published on https://climateseries.com and https://genn.cc
This is part 1 in series of three posts on methane releases from the East Siberian Arctic Shelf recorded in 2021. This is the first in a miniseries discussing the ongoing work in the Russian Arctic talking to Dr Igor Semiletov, one of the lead scientists who has been studying the region for over twenty years.
Old deep thermogenic pool
In assessing whether the potential for increased climate warming is a significant risk, scientists look at the size of the carbon pool and also the origin of the methane. In many cases where methane is produced from biogenic sources, such as animals and plants, it is created by microbes and although has the same global warming potential, it is created very slowly and is often broken down to CO2 before it reaches the atmosphere.
The other source is thermogenic methane that occurs due to the decay of organic matter at high pressure and temperature.
For these conditions to occur, the sediments where they are found are older and deeper. In terms of the East Siberian Arctic Shelf, many scientists have believed that the methane emissions are from biogenic sources.
This means they would be slower to form and overall a lesser risk to the global climate. This article has been created using extracts from recent interviews with Dr Semiletov.
In part 2 I speak to Professor Orjan Gustafsson from the Department of Environmental Science at Stockholm University. Orjan has been visiting the East Siberian Shelf for many years working alongside an international group of scientists including the Russians. He discusses how research into the escaping methane and thawing permafrost in the East Siberian Arctic Shelf should be greatly expanded considering the magnitude and changing stability of the carbon pool. He also suggests that this research could have enormous ramifications for how carbon budgets that inform policy, are calculated.