TV: 14 Israelis who got 3rd shot later infected with COVID-19 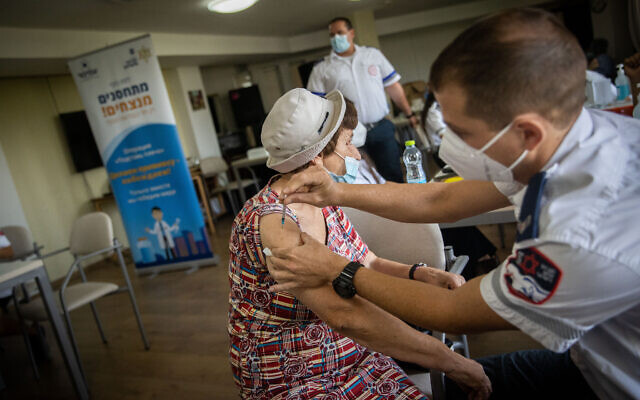 An elderly Israeli receives a third COVID-19 vaccine dose at a retirement residence in Jerusalem on August 4, 2021. (Yonatan Sindel/Flash90)

Fourteen Israelis have been diagnosed with COVID-19 despite having been inoculated with a third COVID-19 vaccine dose, according to Health Ministry data reported by Channel 12 news on Sunday.

According to the network, two of those infected after receiving the booster shot have been hospitalized.

It was not immediately clear whether the 14 contracted the virus before or after receiving the booster. Such sporadic instances would not be enough for medical officials to draw conclusions as to the third dose’s general effectiveness in fighting off the Delta variant of the disease.

Eleven of the 14 cases were over the age of 60, and the remaining three were immunocompromised individuals under 60, the network said. The two that were hospitalized were over 60.

Some 420,000 Israelis have been administered a third booster shot so far, in a drive that began last week.

Meanwhile, in a Sunday meeting, government ministers fought over the prospect of a nationwide lockdown during the upcoming High Holiday period amid surging COVID-19 cases, according to leaks published on Hebrew-language media.

Reports on Channels 12 and 13 and elsewhere said Education Minister Yifat Shasha-Biton, who has courted controversy by calling plans to vaccinate students in schools a “crime,” said during the cabinet meeting that the option of a lockdown must be “taken off the agenda.”

She said such talk was leading to economic instability and “people are anxious for… their livelihood,” the reports said. “We have seen the charts — it doesn’t matter whether countries imposed lockdown or not, the morbidity charts look the same.”

Intelligence Minister Elazar Stern concurred: “We need to eliminate the word ‘lockdown’ from our lexicon. We are causing people to live under threat.”

Hamad Amar, a minister in the Finance Ministry, noted that Australia is currently in its eighth lockdown yet cases are still on the rise, claiming that “lockdown isn’t a solution.”

Other ministers emphasized the need for a lockdown and the importance of talking publicly about a lockdown before imposing one.

“I also don’t think we should intimidate the public, but the truth is that reality is frightening,” Public Security Minister Omer Barlev reportedly said. “The worst situation is not to mention the word ‘lockdown’ and then in four weeks come to a lockdown.

“We need to tell the truth — it’s in the hands of the public,” Barlev added, apparently meaning that increased public awareness and care for health regulations could stave off a closure.

Starting Sunday, gatherings of any size, indoors and out, are limited to those who have been vaccinated, recovered from the virus, or who present a negative COVID test. While the plan originally included synagogues and other houses of worship, these were eventually exempted in prayer services with fewer than 50 participants.

“It hurt to read about the coronavirus cabinet’s decision to exclude synagogues from the Green Pass. As if we did not learn a lesson from the previous waves,” Cohen said. “There is no justification for this exception. It has also led in the past to the deaths of dozens if not hundreds of people who visited synagogues, and this also greatly harms social solidarity,” she added.

Cabinet Secretary Shalom Shlomo responded to Cohen by saying the move was a legal instruction, and not a political decision. The exemption of religious services stemmed from an agreement between Health Minister Nitzan Horowitz and Deputy Attorney General Raz Nizri, who had raised concerns over clamping religious freedom by effectively barring the unvaccinated from communal prayer.

When Cohen asked Shlomo to provide a document instructing the exemption of synagogues, he said there wasn’t one.

Prime Minister Naftali Bennett then reportedly broke up the argument and said the issue of synagogues would be examined “in a smaller forum,” likely referring to the coronavirus cabinet, a forum of ministers whose portfolios deal directly with the pandemic.

Meanwhile, the Health Ministry released new figures Sunday morning showing a continued rise in serious coronavirus cases, with 21 new patients on Saturday bringing the total number to 348, up from 257 on Thursday.

An additional 2,886 people were diagnosed with the virus Saturday at a positive test rate of 3.83 percent, bringing the total number of cases in Israel since the start of the pandemic to 898,433.

Israel’s virus death toll is now at 6,535, with 16 fatalities recorded over the weekend.

The ministry said that out of Israel’s population of some 9.3 million, over 5.8 million have received at least one vaccine dose, nearly 5.4 million have gotten two and over 420,000 have been administered a third booster shot.

Over one million Israelis eligible for the vaccine have not yet received a single dose, according to the Health Ministry.

Bennett, as well as Health Minister Horowitz, expressed interest in the proposal, and it will be examined by the latter’s office, reports said.

Israelis present vaccination certificates at the entrance of the Kadosh Cafe in Jerusalem, August 8, 2021. (Olivier Fitoussi/Flash90)

Ministers on Thursday approved significantly expanding restrictions on gatherings under the Green Pass system, which will now extend to hotels, restaurants and gyms. Gatherings of any size, indoors and out, are also now limited to those who have been vaccinated, recovered from the virus, or who present a negative COVID test.

Channel 12 reported on Friday that Health Ministry officials have indicated that a lockdown would be necessary if and when Israel reaches 600 to 700 seriously ill patients.

“The coronavirus will be here for many years and there will be many more variants, and we need to learn to live with it,” Finance Minister Avigdor Lieberman reportedly said at Sunday’s meeting.