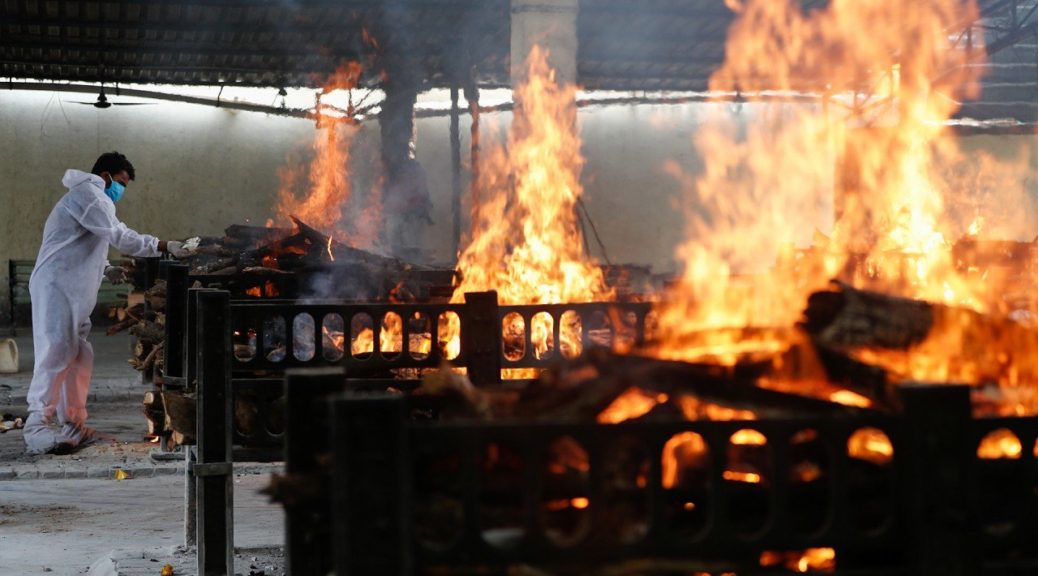 Apart from arguments about deaths from diarrhoea and respiratory conditions because of the horrific smog I suspect that this has something to do with the effects of the vaccine.
How will we ever know?
Basically,my suspicion is that the more they vaccinate the more deaths there will be. These deaths will be ascribed to the virus and so the answer will be to vaccinate even more.
Is this Geert vanden Bossche’s scenario playing out?

The mainstream media’s reporting on the ‘COVID crisis’ in India has clearly been governed by a global approach to messaging that appears to aim at ramping up fear of ‘new variants’ and coerce compliance to vaccination during a period of increasing resistance, both in India and abroad. However, as somebody who lived in India for 8 years in total until December 2019, and as the fundraiser for a food bank in Bihar that has been alleviating the hunger caused by lockdowns [1], I have daily contact with people in India as well as some context for the figures being presented amidst the ongoing alarm.

Firstly, the media are presenting cases and deaths in whole numbers that sound horrendous until you convert them to percentages of India’s huge population of 1.4 billion people. The current daily death rate in India of 2,600 is equivalent to 126 deaths per day in the UK, way below our peak rate and closer to what we are experiencing now. See the graph produced by JHU below to understand the context [2].

Secondly, even as the alleged COVID deaths reach their peak more people die of diarrhoea every day in India and have done for years, mostly due to a lack of clean water and sanitation creating a terrain ripe for the flourishing of communicable disease [3].

Thirdly, Delhi, the focus of the media’s messaging, and the source of many of the media’s horrifying scenes of suffering, has the most toxic air in the world which often leads to the city having to close down due to the widespread effects on respiratory health [4, 5, 6]. This even led to Sonia Gandhi and her son Rahul having to flee the city in November 2020 until the air quality improved [7].

Fourth, high stake assembly elections are going on in some of India’s biggest states at present [8]. Delhi’s toxic air has been a political football for years that neither dominant party addresses directly, preferring to call on individuals’ collective efforts to tackle the problem. Therefore, blaming the soaring respiratory problems that require oxygen on a COVID surge skilfully diverts attention from the ongoing political neglect of this urgent public health issue.

Fifth, respiratory diseases including COPD, TB, and respiratory tract infections like bronchitis leading to pneumonia are always among the top ten killers in India [3]. These conditions are severely aggravated by air pollution and often require oxygen which can be in short supply during air pollution crises. Delhi even saw its first oxygen bar open in 2019, where wealthier residents can pay for a 15-minute blast of oxygen during toxic periods [9].

Finally, the Indian government’s focus on vaccine procurement risks diverting resources from tackling urgent public health issues including access to clean water, sanitation, clean air, and treatments for other communicable diseases. An article in the British Medical Journal reported on disrupted access to TB vaccinations due to lockdowns [10], with TB known to cause around 1.4 million deaths in the country annually.

According to my contacts on the ground, people in Delhi are suffering from untreated respiratory and lung conditions that are now becoming serious. I’ve also had breathing problems there when perfectly healthy and started to mask up to keep the particulate matter out of my lungs. I used to suffer from serious chest infections twice yearly during the big changes in weather in India, usually November/December and April/May. When I reluctantly masked up that stopped. My contacts have reported that the usual seasonal bronchial infections have not been properly treated by doctors afraid of getting COVID, and due to people’s avoidance of government hospitals out of fear of getting COVID. Undoubtedly, these fears will have been fuelled by the media’s alarmist coverage of the situation. Consequently, the lack of early intervention means many respiratory conditions have developed life-threatening complications. Also, people from surrounding rural areas often travel to Delhi for treatment as it has the best healthcare facilities and people can go there for a few rupees by train. This puts pressure on Dehli’s healthcare system during respiratory virus seasons.

Until now, my contacts report that vaccine take-up among the working classes and other minority groups has been low due to widespread mistrust of government-funded vaccination camps. In the context of successive governments’ neglect of other longstanding public health problems that disproportionately affect India’s working class, the rolling news coverage of COVID and lockdowns are perceived as attempts to coerce vaccination compliance. Also, many perceive COVID as a disease more likely to affect the wealthy living in gated urban environments with air conditioning; therefore, a reluctance to comply endures. Vaccination is now being promoted over cheap early treatments that were previously widely available, and while vaccine take-up has increased, so have deaths concordantly as displayed in the graphic from John Hopkins University below [11]. While correlation does not equal causation, most people I have spoken to do not believe this is merely a coincidence. Given the widespread availability of the data online, and anecdotal reports of adverse reactions and deaths, suspicions of the vaccination campaign remain.

When we consider the current media coverage of India’s alleged COVID crisis in the context of the multiple factors presented above, clearly people’s concerns are not unfounded, and all is not what it seems.

3. Times of India (2021) ‘These Diseases Kill Many More Than the Coronavirus’ https://timesofindia.indiatimes.com/india/these-diseases-kill-many-more-than-coronavirus/articleshow/74670863.cms

Meanwhile, aren’t the Indians lucky to have kindhearted Uncle Joe looking out for their interests? Lol

President Biden said Tuesday that it is his “hope and expectation” to share coronavirus vaccine doses with India and other countries in need but did not lay out a timetable for when his administration would begin sharing doses.

Biden noted that he spoke with Indian Prime Minister Narendra Modi about sharing vaccine doses during their phone call on Monday.

“I’ve discussed with him when we’ll be able to send actual vaccines to India, which will be my intention to do,” Biden told reporters on Tuesday when asked about what his administration was doing to assist India.

I remember, during famine in the Horn of Africa America sent aid in the form of out-of-date opthamology textbooks.

Why am I so sceptical? 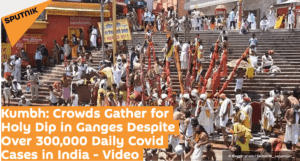 The much hyped Kumbh Mela on the banks of the river Ganges in Haridwar city – has finally come to an end. Observant Hindus consider the time auspicious because of an alignment of celestial bodies – including the sun and the moon – which, in Hindu mythology, causes the water of the Ganges to turn into an elixir of purification.

Hundreds of Hindu devotees converged at the “Har Ki Pauri”, the main river bank of the Ganges, in India’s Haridwar city on Tuesday to mark the last of the four holy dips as part of the Kumbh festivities.

The gathering was allowed by the government of Uttarakhand state despite the fact that India is registering a devastating number of COVID cases each day – more than 300,000 – along with more deaths than are officially being reported by the country’s health ministry.

Talking to Sputnik, Aditya Kapoor, a 27-year-old resident of Haridwar revealed that compared with the earlier three “Shahi Snans” (religious royal baths) that took place between late March and April, this latest ritualistic bath in the Ganges was far lower key.

“Members of the local priest community of Haridwar joined groups of holy men and Naga Sadhus for the final ‘Shahi Snan’ today. Local residents and travellers from other cities were almost next to nil – which was not the case in the previous ‘Shahi Snans’,” he said.

“The nearby local markets which are otherwise busy, also remained quiet. The bus stops and railway stations witnessed crowds of people as Kumbh devotees began returning to their home towns. Random testing of attendees was also being conducted at the river banks,” Kapoor added.

Of those who attended the last of the holy dips in the Ganges, some were wearing face masks and some were not. There was some pushing and shoving – social distancing was not followed strictly by the masses.

Is the Kent Covid variant fuelling India’s explosion in infections? Cases of mutant strain in Kerala region have risen 10-FOLD in a month and now make up a THIRD of all samples… and it is linked to 90% of positives in northern states

It was found in a patient tested by Stanford Health Care Clinical Virology Laboratory in California, according to news reports. The case was reportedly found in the San Francisco Bay Area

The “double mutant” variant of the coronavirus behind the ongoing surge in Covid-19 cases in India has now been detected in the US. The first confirmed infection was reported on Monday

Grieving relatives ATTACK Indian doctors who could not save Covid-19 victims as health care collapses – and Pakistan fears their neighbour’s ‘deadlier, more infectious’ second wave will hit them next

Pakistani troops have been deployed in 16 major cities to assist civilian authorities in enforcing measures meant to curb the spread of the coronavirus, including the wearing of masks in public and the closing of non-essential businesses after 6pm.

“Starting at 6am this morning, troops have been sent to aid the civilian administration in each district,” military spokesperson Major General Babar Iftikhar said on Monday.

The announcement came as the country recorded its highest daily death toll in recent days since the start of the pandemic, and officials said the health care system was nearing its breaking point.

Iftikhar said 570 people were on ventilators in the country and 4,300 in critical condition. In some cities more than 90% of ventilators were occupied, and industrial production of oxygen could soon be diverted for health purposes.

“Ensuring adherence to precautionary measures (for the pandemic) and maintaining law and order will still be the responsibility of civilian authorities,” Iftikhar said.

Japan is hit by coronavirus fourth wave three months before Olympics, with host towns refusing to house athletes due to safety costs

The Canadian Armed Forces will send up to three medical teams to Ontario in order to support hospitals overwhelmed by COVID-19 following a request from the province.

The federal government made the announcement in a statement issued on Monday evening in response to Ontario’s Solicitor General Sylvia Jones, who formally asked for specialized nurses to assist in intensive care, as well as other medical personnel.

In the statement, Minister of Public Safety and Emergency Preparedness Bill Blair said the military would be deploying “multi-purpose medical assistance teams” comprised of nursing officers, medical technicians and other Canadian Forces members for general support.